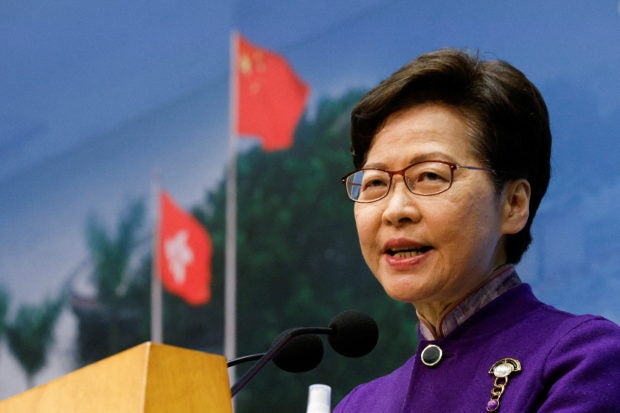 HONG KONG — Hong Kong leader Carrie Lam, who has governed the global financial hub through the unprecedented upheaval of anti-government protests and COVID-19, said on Monday she will not seek a second five-year term of office.

Lam’s announcement came as media said Chief Secretary John Lee, Hong Kong’s second most senior official, was set to resign to join the race to replace Lam in May and become the Chinese-ruled city’s next leader.

“There’s only one consideration and that is family. I have told everyone before that family is my first priority in terms of my consideration. They think it’s time for me to go home,” Lam told a regular press briefing.

Lam, born in British-ruled Hong Kong in 1957 and a life-long civil servant who describes herself as a devout Catholic, took office in 2017 with a pledge to unite a city that was growing increasingly resentful of Beijing’s tightening grip.

Two years later, millions took to the streets in sometimes violent anti-government protests that ultimately led Beijing to impose a sweeping national security law in June 2020, giving it more power than ever to shape life in Hong Kong.

City leaders are selected by a small election committee stacked with Beijing loyalists so whoever becomes the next leader of the former British colony will do so with Beijing’s tacit approval.

Lee, 64, a security official during the prolonged and often violent 2019 pro-democracy protests, was promoted in 2021 in a move some analysts said signalled Beijing’s priorities for the city related to security rather than finance or the economy.

Lee did not immediately respond to a request for comment.

The leadership election was pushed back from March 27 to give the government time to battle a COVID outbreak that has infected more than a million of the 7.4 million people in the former British colony.

Since Hong Kong returned to Chinese rule in 1997, it has had four chief executives, who all struggled to balance the democratic aspirations of some residents with the vision of China’s Communist Party leaders.

Read Next
Polish PM calls for tough response to civilian deaths in Ukraine
EDITORS' PICK
A laptop that maximizes your WiFi so you can maximize your productivity
Powered by style, innovation and passion
In Borongan, nuns play hoops (not mahjong)
PH resumes talks with China on Chinese-funded transport projects
House energy committee chair Arroyo bats for cheap electricity
Why Tagle is a leading papal contender
MOST READ
Why Tagle is a leading papal contender
Arjo Atayde reveals proposal to Maine Mendoza was ‘more than a year’ in the making
My neighbor FVR: From soldier to president
Zubiri on SRA mess: Shameful, disgusting
Don't miss out on the latest news and information.