On eve of vote, VCM final testing yet to be completed | Inquirer News
Close
menu
search

On eve of vote, VCM final testing yet to be completed 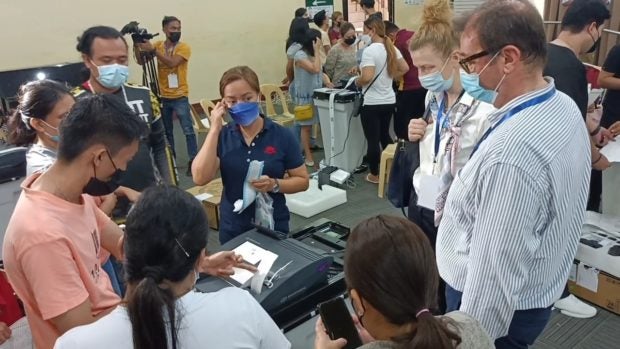 Officials of the Commission on Elections (Comelec) lead the final testing and sealing of the vote-counting machines (VCMs) in Cebu on Thursday, May 5, 2022. (Photo by DALE ISRAEL / Inquirer Visayas)

MANILA, Philippines — A day after the deadline it set for itself, the Commission on Elections (Comelec) has yet to finish the “final testing and sealing” of vote-counting machines (VCMs) with only 79 percent of the defective units replaced.

As of Sunday morning, 633 out of 805 defective VCMs had been repaired, according to the poll body.

The number of faulty units increased to 805 from 790 the previous day. This was out of the total 89,958 VCMs that underwent testing and sealing.

The Comelec said that 143 secure digital (SD) cards also needed replacing as of Sunday and that of the total, only 107 had been resolved.

Based on its election calendar, the final testing of VCMs and SD cards should have been finished by May 7.

But Comelec spokesperson John Rex Laudiangco said the poll body was “still fully compliant” as all these were being completed before the holding of the May 9 elections. He added that the May 7 deadline was set to give the poll body some allowance in case of a contingency.

“This [timeline] is set to give us allowance … the idea of the final testing and sealing is to be done prior to the conduct of the elections. So in a way, we are still fully compliant with that part,” Laudiangco said in a press conference.

Asked for the reason behind the delay, Laudiangco said, without elaborating, that they had issues with the retrieval of the units.

Comelec Commissioner George Garcia, meanwhile, assured the public that the testing of VCMs and SD cards had been completed nationwide, except in Cotabato City.

The electoral board of every clustered precinct is mandated to conduct the final testing and sealing of VCMs to ensure that the units would work properly on Election Day. Once cleared, the machines would be sent to the assigned precinct.

During the testing process, test voters accomplish their ballots and personally feed it to the VCM, to see if it could read their votes.