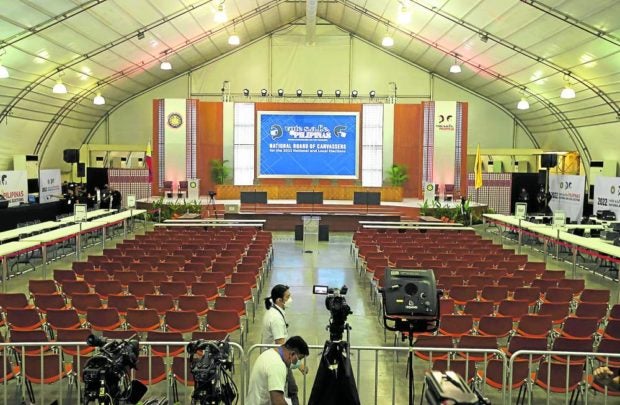 ALL SYSTEMS GO While it’s behind schedule in the final testing and sealing of vote-counting machines, the Commission on Elections is all set to convene itself into the National Board of Canvassers on Election Day. —MARIANNE BERMUDEZ

MANILA, Philippines — The Commission on Elections (Comelec) became the latest victim of online disinformation after a fake resolution perpetually disqualifying senatorial candidate Neri Colmenares and the party-list groups under the Makabayan bloc made the rounds on social media over the weekend.

At a press conference on Sunday, newly appointed spokesperson John Rex Laudiangco confirmed that the resolution was fake.

The forged ruling purportedly granted the petition of a certain Angela Aguilar asking the poll body to disqualify Colmenares, a former congressman of party-list group Bayan Muna, and permanently bar him from holding public office.

The same penalties were said to have been approved with regard to Bayan Muna as well as party-list groups Anakpawis, Kabataan, Alliance of Concerned Teachers (ACT Teachers), and Gabriela.

The ruling was supposedly signed by Commissioners Socorro Inting, Aimee Ferolino and Aimee Neri of the poll body’s first division.

A press statement attributed to the Comelec also circulated on social media, announcing the supposed disqualification of Colmenares and the Makabayan party-list groups.

Laudiangco said, “I was in contact with [those] who supposedly signed the resolution, Commissioners Inting, Ferolino, and Neri, and we are stating that this document circulating regarding certain party lists and senatorial candidates is fake and spurious.”

He added that the resolution contained “glaring errors” on how such rulings were written.

“This is supposedly a case resolution, but the body contains ‘whereas,’ which [is] the intro part of implementing resolutions,” he said.

In disqualifying Colmenares and the Makabayan groups, the spurious resolution cited Section 6 of Republic Act No. 7941, the Party-List System Act, which disqualified party-list groups found to be “advocat[ing] violence or unlawful means” to achieve their goals.

According to the petition granted by the fake resolution, Colmenares and company were involved in terrorist activities.

Laudiangco said any order and decision by the Comelec en banc or its divisions would be officially communicated by the poll body itself.

Makabayan acknowledged that there was such a petition to have its party-list groups disqualified, which the Comelec’s first division dismissed on Jan. 3, 2020. But otherwise, it said everything else about the resolution was fake.

“The first division dismissed the case filed in 2019 by an ‘Angela Aguilar,’ who appears to be a fictitious petitioner because she gave a fake address and has never [appeared] before the Comelec to prove her allegations,” the progressive coalition said.

It added: “For want of evidence, [Aguilar’s] claim that grounds to … warrant [the] cancellation of party-list respondents’ registration in the party-list system and the disqualification of respondent Colmenares has no leg to stand on.”

The Makabayan bloc also expressed suspicion that “Angela Aguilar” could be an alias used by state agents.

The National Task Force to End Local Communist Armed Conflict has time and again linked the progressive bloc to the communist underground.

Makabayan vowed to take legal action against those behind this “desperate and dirty tactic.”

“It’s obvious that the petition is a harassment case and is the handiwork of those who want to slander [us],” the coalition said, adding that “election saboteurs” are out on social media to discredit its members and party-list groups.

“We trust that the Comelec will act quickly because not only have its commissioners’ names and its official name and seal been used in this widespread and blatant trickery but this fake news aims to sabotage the electoral process and smear the integrity of the commissioners and the Comelec itself,” Makabayan said.

Comelec to file cases vs 5 alleged peddlers of ‘disinformation’