Robredo: Rare force and flair of ‘a people’s campaign’ 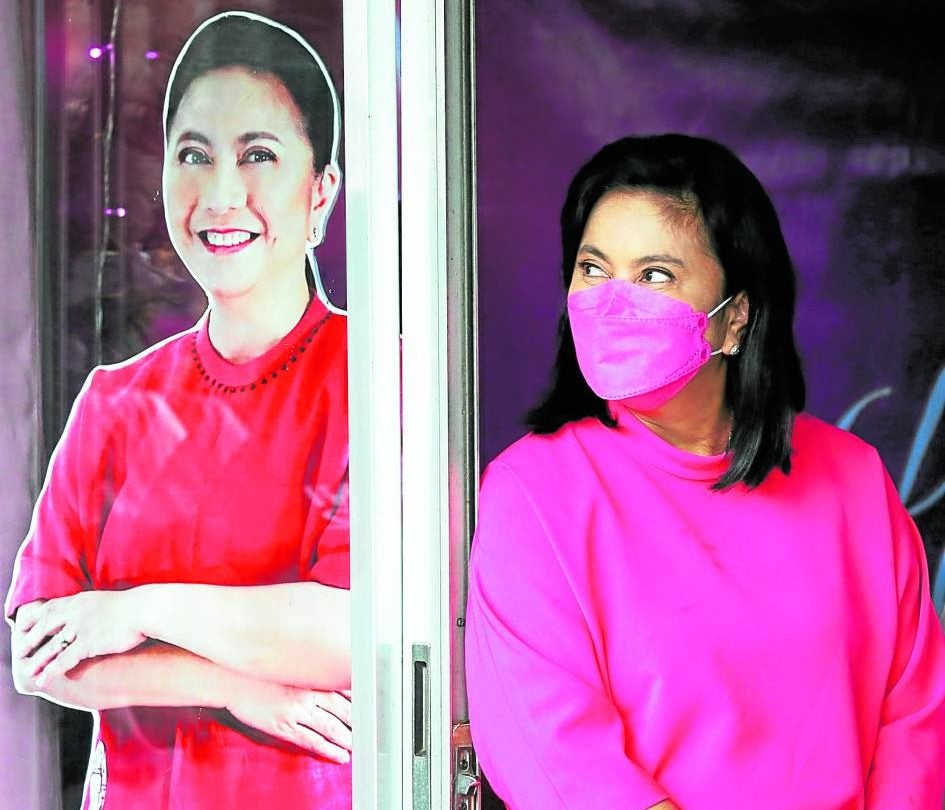 With its pink visuals and volunteer spirit, Vice President Leni Robredo’s campaign will likely be remembered as the most colorful, creative and passionate in the country’s political history, perhaps matched only by the anti-Marcos rallies leading to the 1986 snap elections. Her supporters have turned up in staggering numbers, drawing confidence from their drone shots, as they see May 9 as more than just a rematch between her and the late dictator’s son—but a now-or-never pushback to keep the nation off the precipice.

Presidential candidate Leni Robredo calls them the “biggest resource” of her election campaign.

Way past midnight on April 29, lawyer Carlito Zaragoza is still packing bread and boiled eggs which he and his wife, Cheryll, are to bring to the Vice President’s rally in Santa Rosa, Laguna province. (In the morning, they would drive for nearly two hours from their house in Bacolor, Pampanga province, to join the mass gathering, where they would distribute the snacks for free.)

Some 130 kilometers away, in Calamba City, Nono Pardalis and his daughter Maia are getting ready for the same event.

They are pasting “Kay Leni-Kiko Tayo” stickers on bottled water intended for their fellow “kakampinks,” the name by which supporters of Robredo and her running mate, Sen. Francis “Kiko” Pangilinan, call themselves—wordplay on “kakampi” (teammate) and “pink” (the tandem’s campaign color).

It is Zaragoza’s first time to take part in any election campaign. He says he and his wife were inspired by the spirit of volunteerism they witnessed three weeks ago at a Robredo-Pangilinan rally in San Fernando, Pampanga, which drew over 220,000 people.

“Robredo herself motivates her supporters to share what they have,” Zaragoza, 43, tells the Inquirer. “That’s the kind of inspiring leadership she has shown in the past six years” despite the scant budget received by the Office of the Vice President (OVP), he says.

Pardalis says he wants his child Maia, 17, to feel for herself the “hope” ignited by the Robredo-Pangilinan tandem. “Her campaign makes the image of ‘people power’ clearer to young Filipinos—how volunteerism can mount a campaign without that much money,” he says.

Robredo, 57, acknowledged early on that the likes of the Zaragozas and the Pardalises had made her candidacy unique. She described it as a “people’s campaign,” an active, multisectoral clamor to restore accountability and transparency in government.

In an online forum on Feb. 18, she told a group of overseas Filipinos that she considered her network of supporters the “biggest resource” of her campaign. They have become “so invested,” she said, that they were producing and handing out tarps, T-shirts and flyers faster than her national campaign headquarters could.

“Your involvement now is so different from the past elections. We’re seeing this on the ground,” she said. “Our volunteers really spend their own money and think about what they can do without waiting for the national campaign team.”

A website created by “Team Leni Robredo” helped organize them according to “13 departments” where their skills and expertise were put to best use.

The Filipino trait of “bayanihan” (community spirit) thus became a common motif in Robredo rallies, almost all of which were organized by volunteers. It sparked an explosion of creativity and unscripted moments.

One recurring feature has Robredo, from the stage, reading aloud from the placards hoisted by the crowd—often an occasion for mirth, but also an opportunity for her to indirectly address bashers.

At a rally in Cebu City on Feb. 24, she called attention to a banner that read: “Yes to lugaw, No to nagnanakaw (Yes to rice porridge, No to thieves).

Followers of her closest rival, Ferdinand Marcos Jr., call her “Leni lugaw”—not for the hot porridge usually provided by the OVP in disaster areas, but for her supposedly being soft or shallow as a decision-maker.

“Didn’t you notice? Because of your passion, your creativity comes out,” she told her Cebuano supporters.

The commitment of Robredo’s supporters has, despite the pandemic, produced staggering numbers in rallies and motorcades since she announced her decision to run for president on Oct. 7, 2021. The earliest example and momentum builder was the Feb. 12 rally at Quezon Memorial Circle in Quezon City, which drew an estimated 20,000 people.

The mammoth gatherings evolved into a contest of sorts, with her organizers in provinces, cities and towns trying to outdo one another in setting attendance records.

Once-apolitical firms and brands openly supported Robredo. The restaurant chain Cafe Breton, for example, was among the first to incorporate the color pink in its logos.

“We are happy to report that there are a lot more kakampinks who support us! We will not back down and we will show our true colors,” Cafe Breton posted on Twitter. “We intend to leave a legacy of decency and bravery to our children. We are in this fight for their future and our country.”

Celebrities, performing for free and with much gusto, further fired up the rallies’ festive atmosphere.

They included A-listers like Sharon Cuneta, Vice Ganda, Ogie Alcasid and Regine Velasquez-Alcasid, Gary and Gab Valenciano, Jolina Magdangal, Yeng Constantino and Kyla, rock bands Rivermaya, True Faith and Mayonnaise, and theater artists, among many others, as well as a host of social media influencers.

Comedian and talent manager Ogie Diaz said he and his fellow celebrities had turned down lucrative offers to endorse other presidential candidates. “But we know that there are more important things in life than money,” Diaz said at a rally in Baliuag, Bulacan province, on April 27.

In another rarity in Philippine elections, the Robredo campaign inspired songwriters to produce originals echoing her message of hope, faith, inclusivity and good governance—again for free.
Visual artists did their part in their respective neighborhoods by turning walls pink with Leni-Kiko portraits and slogans.

This passion was later channeled to house-to-house campaigns in cities and towns, as well as flash mobs singing and dancing in various spots.

Lawyer Barry Gutierrez, Robredo’s spokesperson, said he had never witnessed such a level of commitment to a cause in all his years in the political sphere.

“This is not just about her as a candidate, but also the values Robredo represents as a person,” he told the Inquirer. “The people thirst for the kind of governance she offers, one that is inclusive and transparent.”

But why have the preelection surveys not reflected this, and continue to show Robredo a far second to Marcos Jr.?

Robredo came into the game late, deciding to run at the last minute, and is up against a well-funded, decadeslong effort to rehabilitate the Marcos image.

Gutierrez said that whatever the outcome of the presidential election, there was no denying Robredo’s indelible mark on the national consciousness.

“Whatever happens, … the energy we have seen in the past months that has coalesced around VP Leni’s campaign—the volunteer engagement, the citizen participation, the thirst for new politics—is something that will persist … I think we have been witness to the birth of a new political movement led by ordinary citizens,” he said.

Many of Robredo’s kakampinks agree that this movement is only possible because her record is clean—a rarity in Philippine politics. A longtime human rights lawyer and economist, the Vice President has been working with and for impoverished communities for whom basic social services are inaccessible.

“When I say I am against corruption, I have receipts,” she often said in her stump speeches.

It’s not a boast. The list of programs and projects she has initiated in cities and provinces, involving livelihood, scholarships and housing, all done within her office’s meager budget, is long.

Reporters covering Robredo noted her extraordinary diligence. She worked beyond 16 hours a day to keep herself updated on national events while on the campaign trail. Every day was a game of

Keeping Up with the Robredos, in which, instead of mansions and golf courses, they visited depressed communities that rarely saw politicians.

Robredo had the most grueling campaign, leapfrogging across provinces and regions in one day to reach as many people as humanly possible. On her birthday on April 23, she flew from Sultan

Kudarat to receive a rare endorsement from the Moro Islamic Liberation Front to Pasay City where she faced 450,000 of her kakampinks.

To date, she has visited 68 of the Philippines’ 81 provinces and 103 of its 146 cities since she filed her certificate of candidacy.

She made sure not to miss the overlooked areas: She is the only presidential aspirant to campaign in Basilan, and even small islands like Marang-Marang in Isabela City and Bantayan Island in Cebu.

In some places where she spoke with farmers and fishers, she refused to bring reporters with her because she didn’t want them to feel that she was using them.

When Robredo addressed the crowd in Mandaue City—the final stop in a 135-kilometer whirl across northern Cebu on April 20—she said: “People from the places I visited asked me earlier, Why do you still tour far-flung provinces when there is already a grand rally here in Mandaue? [It’s] because this is what you can expect from me when I become president. If elected, I promise you this:

The government will come to you. The farther you are, the harder it is to get to you, the more I will visit you to let you know that we will never neglect you.”

Robredo has been the target of disinformation and Red-tagging from all fronts including her political rivals. Not only did she have to fend off such accusations as forming a coalition with the Reds, but her supporters also faced harassment and intimidation on the ground.

She was seldom caught off-guard. She urged her followers to stay focused when she was called a communist or a duplicitous politician, and even when fake sex videos of her daughters were circulated. (But when she saw heartthrob actor Piolo Pascual among the viewers of one of her Facebook Lives en route to a sortie, she said, suddenly self-conscious: “Oh my god, si Piolo Pascual.”)

Robredo was calm and level-headed on the hustings, hardened perhaps by the past six years of hostility from the Duterte administration.

When Manila Mayor Francisco “Isko Moreno” Domagoso demanded that she withdraw from the race, she did not bite the bait and merely said she had a bigger fight to win.

Online trolls say the crowds in Robredo’s rallies are lured by the “free concerts.” Actually, the loudest cheers are reserved for her. People wait for her for hours, and leave only after she has spoken.

“The level of passion and energy for Robredo’s sorties is really unprecedented,” Dr. Jean Encinas-Franco of the University of the Philippines said in an interview. “The more rallies she has, the bigger crowds she seems to get … and these create an impact, no matter what people say … ”

Robredo’s children, Aika, Jillian and Tricia, took a decisive role in her campaign. “Soft” and undecided voters found themselves charmed by the bright young women that this candidate has been raising by herself since her husband Jesse Robredo died in 2012.