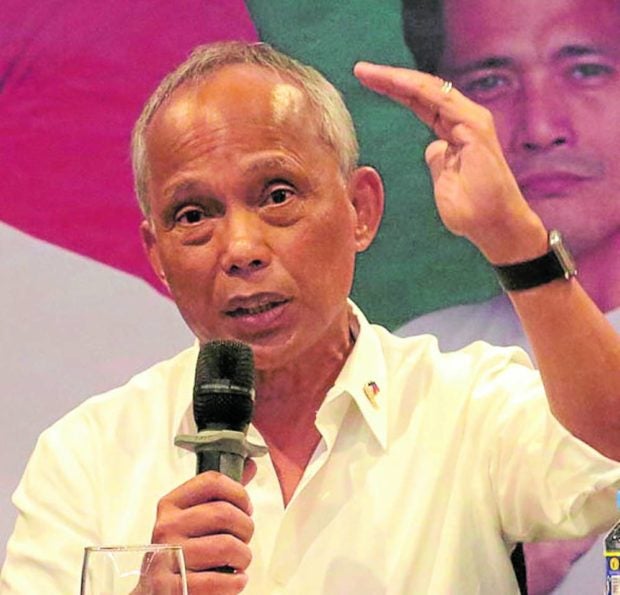 A division of the Commission on Elections (Comelec) has declared the faction of Partido Demokratiko Pilipino-Lakas ng Bayan (PDP-Laban) led by President Duterte and Energy Secretary Alfonso Cusi as the “true and official” members of the ruling party, over the other faction of the party led by the son and namesake of its cofounder.

Voting 2-1, the poll body’s special Second Division on Friday granted the petition filed by the Cusi wing in August last year to declare as illegitimate the other faction led by Sen. Aquilino “Koko” Pimentel III.

Pimentel is the son of former Senate President and party cofounder Aquilino “Nene” Pimentel Jr., who founded the PDP-Laban in 1982 together with the late Sen. Benigno Aquino Jr. as an opposition force against the Marcos dictatorship.

It happens that the Cusi wing is backing the presidential candidacy of former Sen. Ferdinand “Bongbong” Marcos Jr., the son and namesake of the late dictator.

The Comelec’s regular Second Division is composed of Commissioners Marlon Casquejo, Rey Bulay and George Garcia.Garcia, however, inhibited from the PDP-Laban case. Thus the poll body organized a special Second Division, with Socorro Inting replacing him.

Bulay and Inting voted in favor of the Cusi wing, while Casquejo dissented.

“The fact that [Mr. Duterte] presided over the election of the new sets of party officers and committee chairpersons validates [that] entire process,” the special Second Division said, referring to the party’s national assembly held in Pampanga in July last year, as organized by the Cusi faction.

Ousted in that event were Pimentel as party president and Sen. Manny Pacquiao as chair.

Pacquiao was the presidential bet backed by Pimentel’s group until the Cebu-based Promdi party officially endorsed him as its candidate, two months after the PDP-Laban’s national assembly.

The Cusi faction of the PDP-Laban is now deemed the dominant majority party, following the special Second Division’s ruling in its favor.

With their respective dominant-party status, both the PDP-Laban and the NP are given the privilege of posting election watchers during the cavassing of votes. They are also entitled to copies of election returns and certificates of canvass.

Like the PDP-Laban, the NP also supports Marcos Jr.’s candidacy.

Cusi hailed the Comelec’s decision, saying in a statement: “Without a doubt, we at PDP-Laban are reinvigorated to continue the programs, services and advocacies of President Duterte from this day until the next term.”

He thanked the Comelec for its “wise decision” and offered reconciliation to Pimentel. “We invite Sen. Koko Pimentel to meet with us. We invite him to take a step back and to not be emotional. Let us unite for the sake of PDP-Laban. Let us make the party stronger than ever,” Cusi said.

But Pimentel rejected the Comelec’s decision. In a Viber message to reporters, he asked: “Those of us who have known only one political party, the PDP-Laban, and have been with PDP-Laban for 40 long years will now be separated from our party because of Secretary Cusi who joined the party five years ago and his group of people who are outsiders and strangers to the party?”

Pimentel said his group would appeal the decision and question why they were not even informed about it.

He insisted that his faction should still be recognized as the dominant majority party while the decision “is not immediately executory.”

Pacquiao said he was not bothered by the ruling.

“Our campaign is drawing to a close and I am not thinking about that at all,” said the retired boxing champ and presidential candidate.

“For now I am leaving this in Koko’s hands and I am focused on the last stretch of the campaign,” he added. —WITH REPORTS FROM JULIE M. AURELIO, NESTOR A. CORRALES AND DJ YAP