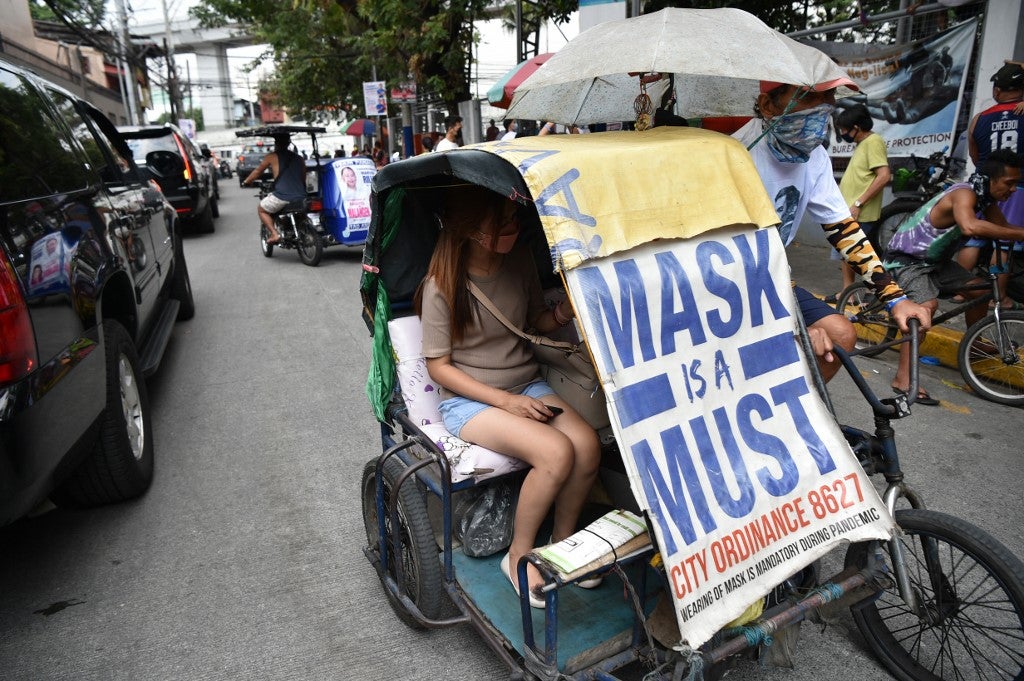 A passenger (C) sits inside a tricycle covered with a reminder to wear a mask, part of the Covid-19 health protocols, in Manila on February 16, 2022. (Photo by Ted ALJIBE / AFP)

MANILA, Philippines—As the COVID-19 pandemic continues to batter the Philippine economy, the next set of the country’s leaders face the challenge of revising the Duterte administration’s budget priorities for a more inclusive recovery, according to a study.

Due to the current pandemic, the Philippines suffered a 9.5 percent drop in gross domestic product (GDP) in 2020—the biggest since the government started recording yearly output in 1946 or after the Second World War.

Moreover, lockdowns and restrictions caused by the pandemic have led to the temporary closure of 65.9 percent of firms and the permanent shutdown of 1.1 percent. These figures, according to the Asian Development Bank, were among the highest numbers in the Southeast Asian region.

The economic impact of the COVID-19 pandemic also became evident as the country’s unemployment rate reached a high of 17.7 percent, while underemployment, or people who have jobs but not enough pay, was 18.9 percent as of April 2020. 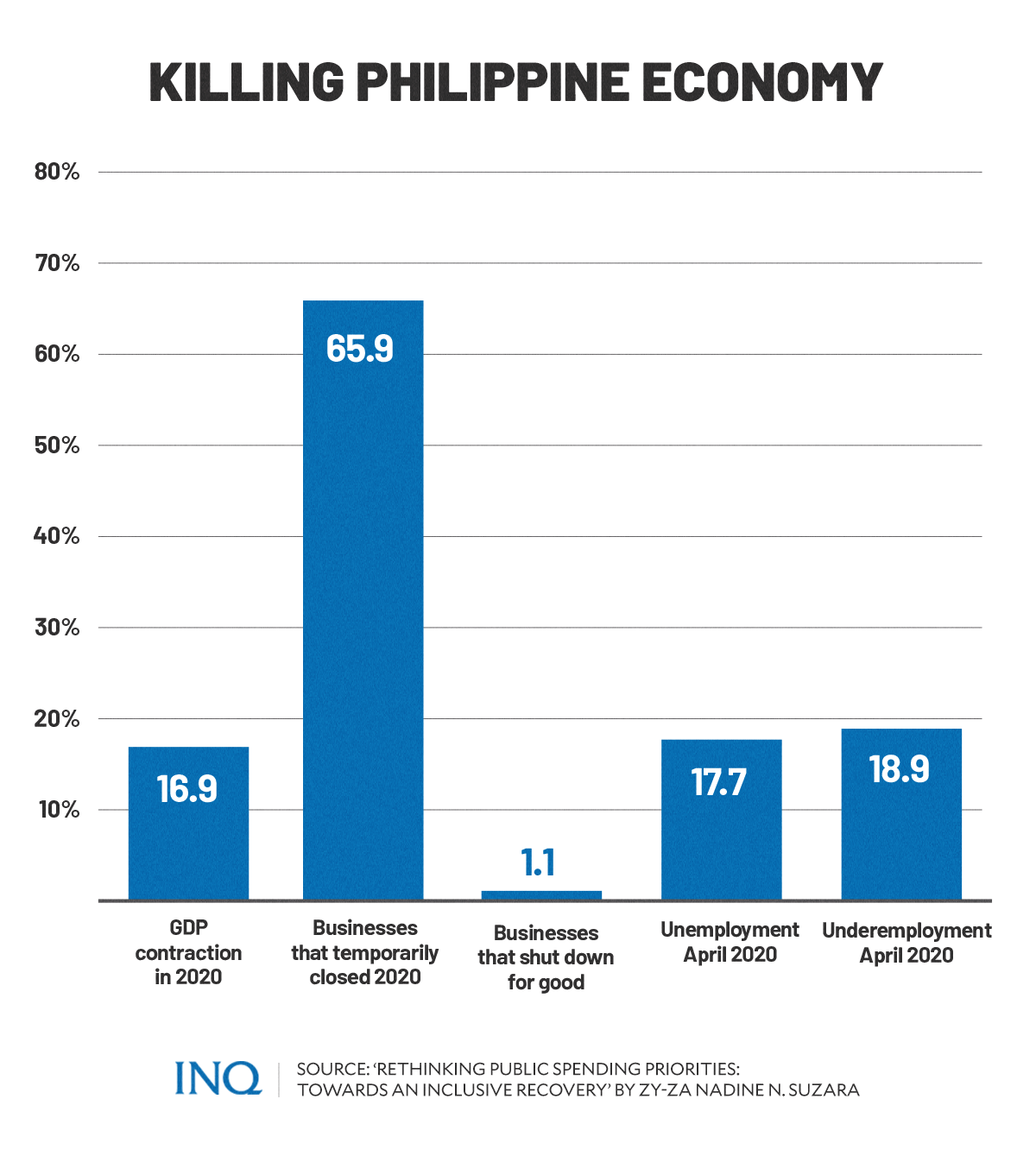 Although the figures have slightly improved amid the lifting of strict quarantine restrictions, a special study by Zy-za Nadine Suzara, executive director for iLEAD, emphasized that the improvements were still nowhere near pre-pandemic levels.

Suzara also emphasized that amid the grim economic figures brought by the pandemic, the Duterte administration has placed priorities mostly toward infrastructure spending, which the study found incapable of responding to the health crisis and helping businesses recover from the slump.

“The public budget is really at the core of governance. In principle, it’s the clearest expression of any government’s development agenda,” Suzara said at the launch of her special study, Rethinking Public Spending Priorities Towards an Inclusive Recovery, at a forum hosted by think tank Stratbase ADRI last April 28.

“What happened, however, was that while most departments experienced budget cuts or stagnation in the 2022 National Expenditure Program (NEP), the funding for infrastructure continued to dominate the government’s (already) limited fiscal space.” 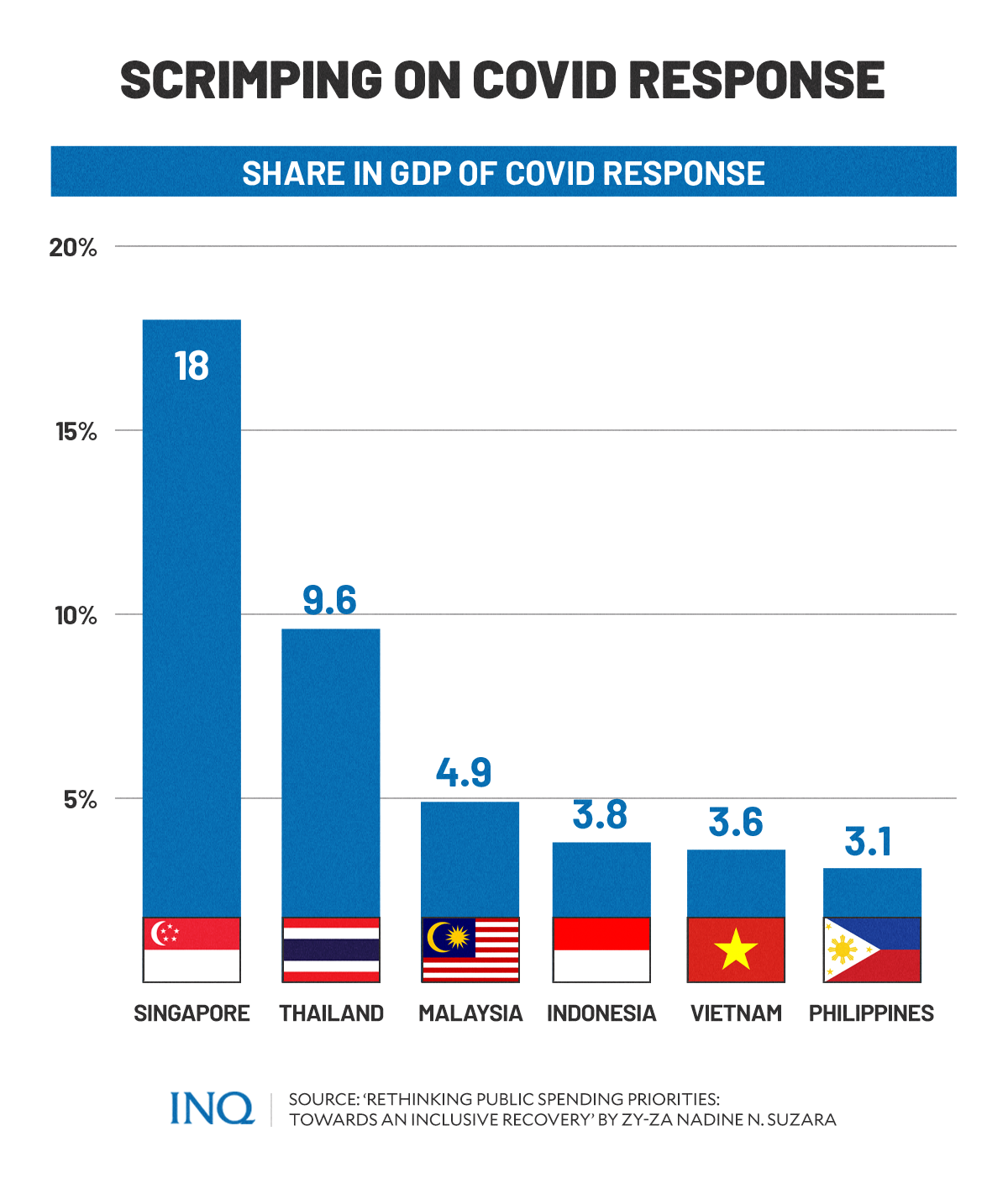 “Apart from this, the proposed budget for less strategic and more patronage-driven infrastructure projects has increased astronomically,” Suzara said.

Suzara’s paper is part of the Stratbase ADR Institute’s (ADRI) series of 16 special studies on policy recommendations for the next government.

In the said special studies series, experts laid down significant findings from studies and research, analyzed issues faced by the current administration, and gave recommendations for the next administration.

Because of this, the next set of leaders will have to rethink budget priorities, hopefully focusing on boosting health systems, promoting inclusive recovery,  implementing structural reforms, and re-establishing participatory mechanisms to ensure transparency.

Suzara noted some key observations on the 2022 NEP under the current administration. First was that infrastructure development continues to take up fiscal space, even though the Build, Build, Build program was found to be not the most effective strategy for health and economic recovery.

“Despite the pandemic, the DPWH continues to emerge as the top recipient department while the DOH along with other critical frontline agencies which are supposed to provide economic aid and fiscal stimulus trail behind DILG (Department of Interior and Local Government)  and DND (Department of National Defense),” said Suzara. 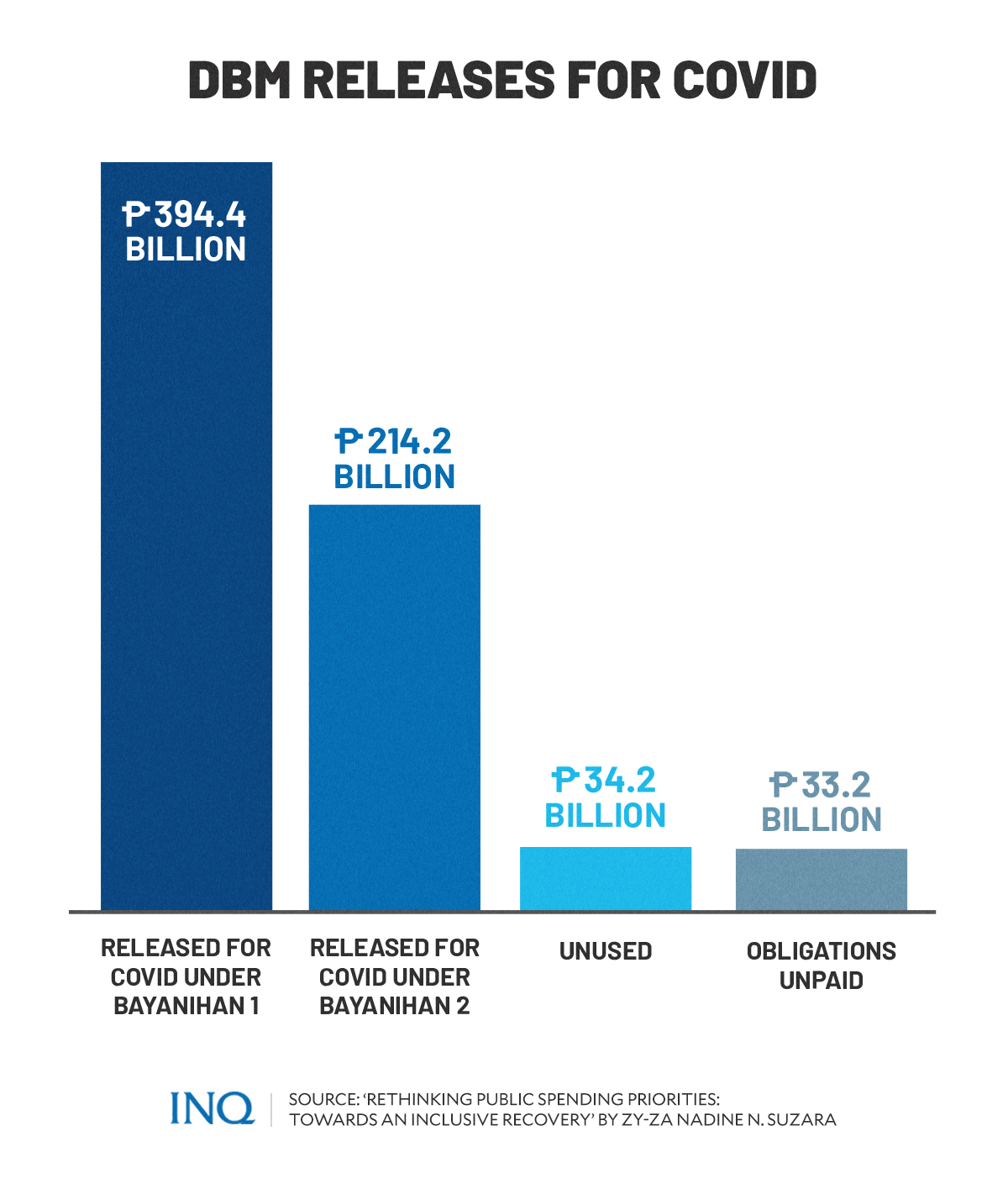 “Although the DOH budget increased by Php22.2 billion or 16.8%, the increase largely went to the Health Facilities Enhancement Program and Human  Resources for Health,” the study said.

“Nonetheless, the funds for vaccines are again parked under the Unprogrammed Appropriations. Php45.4 billion for the procurement of vaccines will again be financed by through loans despite projected revenues amounting to Php3.3 trillion,” it added.

In the study, Suzara also highlighted the lack of allocation of contact tracing, special risk allowances for health care workers, and budgets to expand COVID-19 testing in the country.

She also pointed out the cuts made in the budgets supposedly for epidemiology and surveillance—from P158.6 million to only P113 million.

“What we saw in the 2022 GAA are the following: a continued insistence on the ‘brute force approach to infrastructure, high allocations for ‘pork’ making it definitely an election budget, bloated unprogrammed appropriations leaving education, health and economic recovery programs without guaranteed funding, and a commanding share for military and law enforcement,” Suzara said.

“The philosophy seemed to be: put as many infrastructures as we can into the national budget, never mind if we do not have allocations for economic aid or fiscal stimulus for businesses that closed down.”

Another thing pointed out in the study, which further showed the lack of a clear-cut pandemic recovery strategy in the national budget, was the inclusion of non-urgent expenditure items in the 2022 NEP—which Suzara said “do not  directly respond to the pandemic.”

These include the initial proposed expenditure items such as:

“In the context of the pandemic and forthcoming implementation of the  Mandanas Ruling, these lump sums funds are prone to duplication, abuse, and electioneering,” Suzara said. 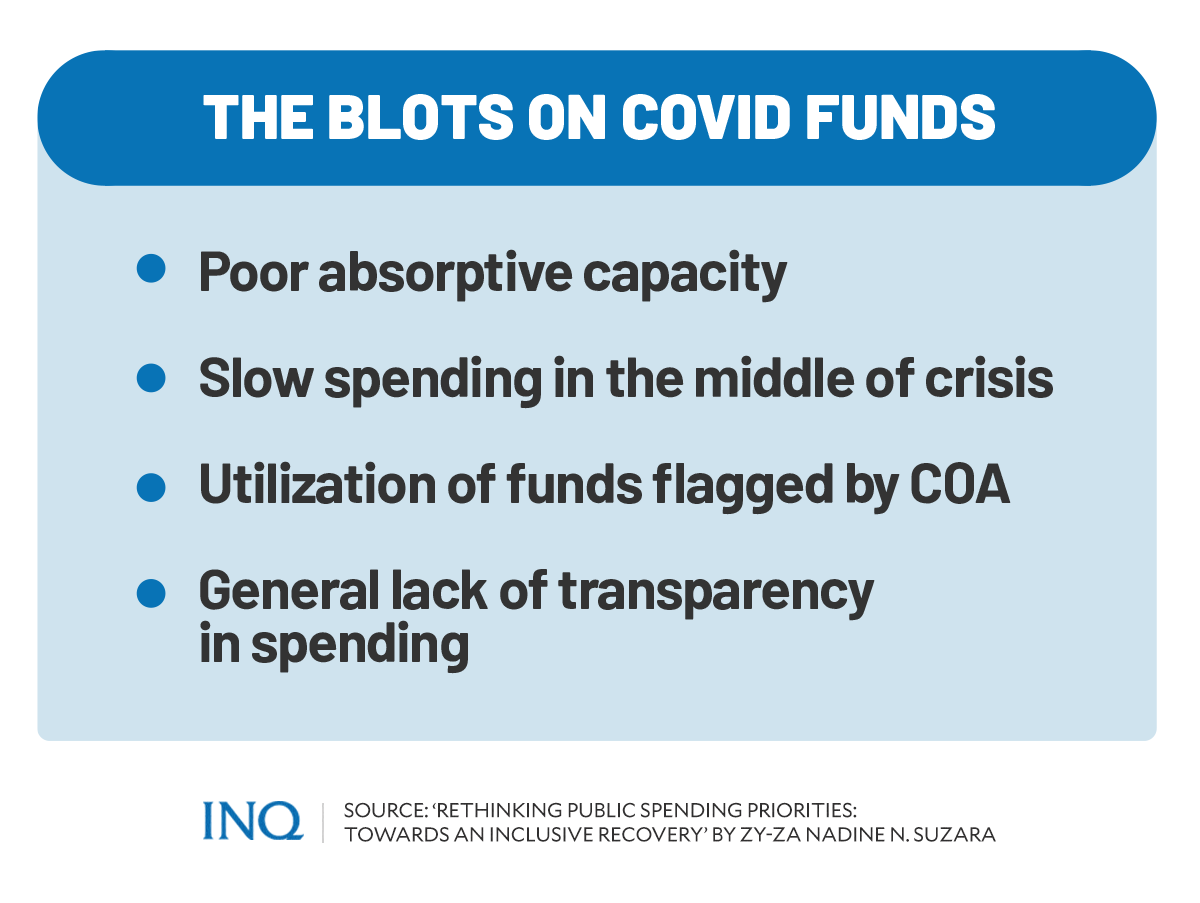 The Mandanas ruling stemmed from petitions lodged by Batangas Gov. Hermilando Mandanas and former Bataan Gov. Enrique Garcia Jr. seeking a share of LGUs in all national taxes—not just from taxes collected by the Bureau of Internal Revenue (BIR) but also duties from the Bureau of Customs (BoC).

READ: LGUs should not depend on windfall from Mandanas ruling – Escudero

“The fiscal space carved out for the above-mentioned expenditures could have been allocated instead to more urgent programs like vaccination,  economic aid and fiscal stimulus which would help households and businesses  stay afloat during this crisis,” said Suzara’s study.

Suzara, however, noted the changes sought by the Senate on the Executive-proposed version of the national budget, which includes significant cuts in funds for NTF-ELCAC, the President’s contingency fund as well as other special-purpose funds—such as Miscellaneous and Personnel Benefits Fund, Pension and Gratuity Fund.

The initially proposed P28-billion budget for the Duterte administration’s counterinsurgency task force was slashed to P10.8 billion by the Senate when it approved its version of the 2022 budget.

In December 2021, the Senate and the House of Representatives have agreed to set the 2022 budget of the NTF-ELCAC at P17.1 billion.

“[T]he current designs of the 2021 General Appropriations Act and the 2022 National Expenditure Program have not sufficiently prioritized spending towards public health and fiscal support,” Suzara said.

“There is a need to rethink  the current administration’s fiscal policy to ensure an inclusive and sustainable  economic recovery.”

According to Suzara, there are still ways to use the national budget to support a more inclusive recovery.

To do this, she listed recommendations that can serve as starting points in redesigning the 2022 national budget and the succeeding budget to support recovery.

She also said that the government should re-establish open and participatory mechanisms to ensure transparency and accountability in the procurement and use of COVID-19 funds.

Moreover, she emphasized the importance of the role of civil society in a people-centered budgeting process. According to her, many civil society organizations are clear about policy and political agenda.

However, advocacies can only be implemented by the government if there are concomitant funding sources for them.

“That’s why it’s important to buttress that policy advocacy with a very specific technical advocacy when it comes to budget lobbying,” she said. “I think that is a very powerful way by which we can first demand transparency and accountability, and then push for a more inclusive democratic governance agenda.”

More issues for next leaders

The next administration, based on findings from Suzan’s study, needs to focus on supporting Filipino workers who were hit by the health and economic impacts of the COVID-19 pandemic, providing substantial investment in education and ensuring that there is safe, humane, and inclusive public transportation.

The government, led by the next set of leaders, should also open up spaces to allow civil society participation in the budget process as early as the budget preparation phase.

Suzara also said that the government should establish an online portal that provides comprehensive, timely, and publicly available status reports on fund utilization and project implementation.

“We should shift the attention towards the governance and structural issues contributing to the prevalent and worsening impact of these national concerns that have echoed across different administrations,” said Stratbase ADRI President Professor Victor Andres “Dindo” Manhit.

“The resulting effort should be and one that is people-centered, sustainable, and globally competitive,” Manhit added.