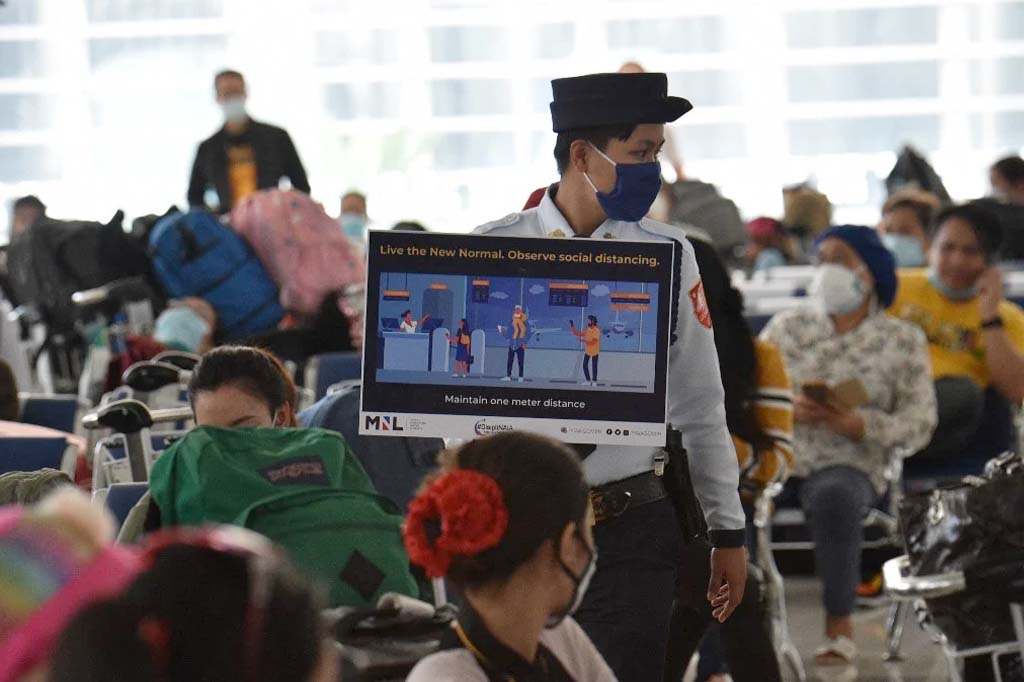 FILE PHOTO: A guard holding a placard reminding people of social distancing walks past Philippine overseas workers who were quarantined for weeks after returning home as they wait for flights back to their home cities around the country, at Manila’s international airport. AFP

MANILA, Philippines—As the impacts of non-traditional and existential threats to humanity spill beyond borders and affect not only states but regions across the globe, national efforts to address security issues were found to be no longer sufficient.

“The impact of non-traditional security issues are not only threats to people’s security but also to national sovereignty and territorial integrity,” said Dr. Mely Caballero-Anthony, professor and head of the Centre for Non-Traditional Security (NTS) Studies at S. Rajaratnam School of International Studies, in a special paper.

“Anything that is technically non-military is commonly regarded as a non-traditional security (NTS) issue, be it local or transnational in nature,” she said.

“Some examples are the spread of infectious diseases, natural disasters, resource scarcity, transborder pollution and environmental degradation, irregular migration, transnational crime, but also threats such as state-sponsored violence on domestic populations and the emergence of non-state armed actor,” she added.

As trans-border implications of NTS become more prevalent amid the pandemic, Caballero-Anthony said the focus should be on implementing comprehensive approaches beyond the usual political-security measures.

Such comprehensive approaches include socio-economic policies, the humanitarian use of military force, and cooperation among nations. 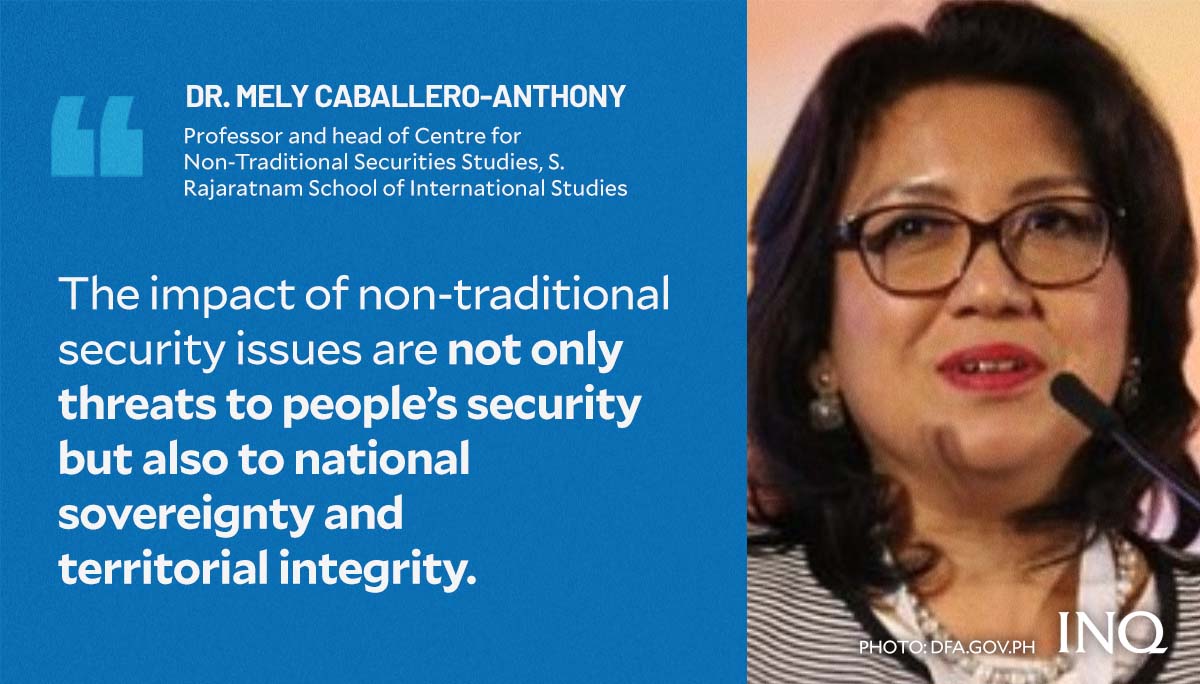 Foremost among these threats included pandemics and climate change, which have been emphasized by UN Secretary-General António Guterres in a statement last year.

“The COVID-19 pandemic has shown the devastation that so-called non-traditional security threats can cause, on a global scale,” Guterres said.

“Preventing and addressing the poverty, food insecurity, and displacement caused by climate disruption contributes to sustaining peace and reducing the risk of conflict,” he added.

The pandemic, according to Caballero-Anthony, has also highlighted that health security is fundamental to international peace and security.

“For a region that is no stranger to pandemic outbreaks, COVID-19 and its severe consequences serve as a grim reminder of the fragility of peace and security in Asia,” she said.

Meanwhile, in addressing climate change—which she said has cross-cutting consequences—the government must consider the risks brought by climate change to conflict settings “in countries where peace is fragile.”

“These kinds of issues need a whole-of-government approach to allow for comprehensive ways to deal with multiple consequences – from food crisis caused by extreme weather events, diseases, forced migration, conflicts, and instability.”

Caballero-Anthony likewise pointed out in her special paper that NTS threats likewise underscore the importance of multinational cooperation.

“The trans-border nature of these challenges compels states to work closer together,” she said.

“Held April 5 and organized by think tank Stratbase ADR Institute in partnership with Bower Group Asia, the forum titled ‘The Future of US Commitment: The Outlook Under Biden and Beyond’ tackled how the United States is navigating its complex and role before its domestic, regional and global audience,” the think tank said in a statement.

“Dr. Parameswaran said the linkages between the US and the Philippines go beyond the security and trade in the economic dimension, which explains the resistance to the Duterte administration’s pivot to China from public opinion, institutional structures, the military, and the elite establishment,” it added. 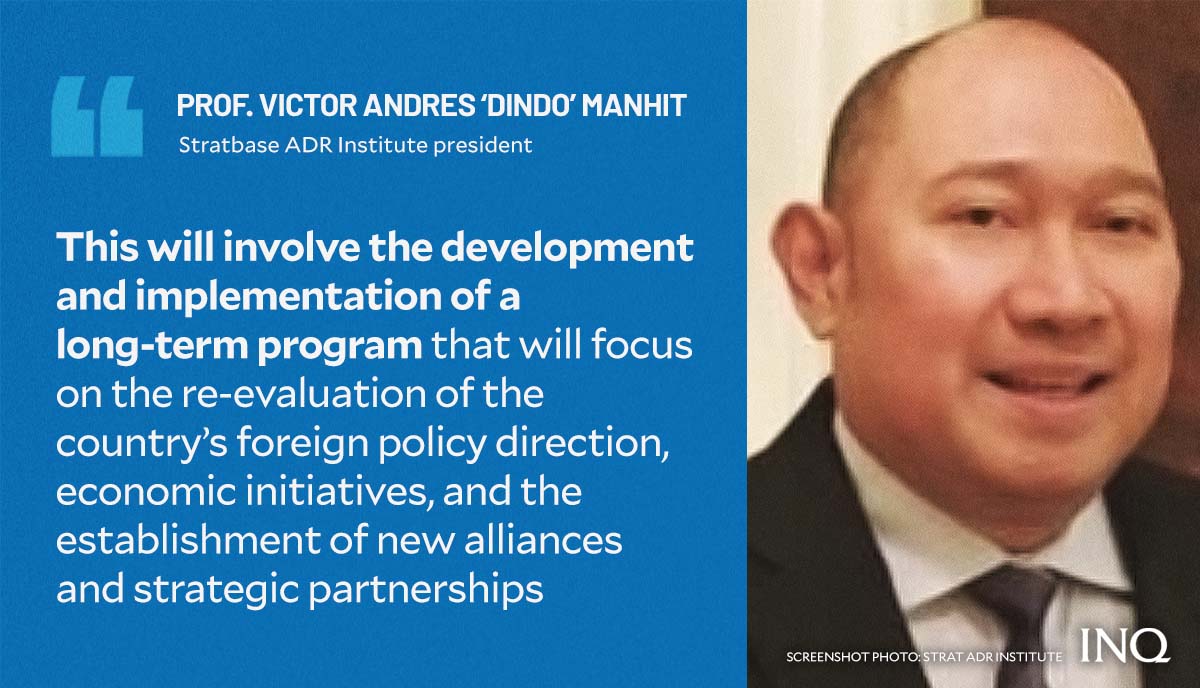 “This will involve the development and implementation of a long-term program that will focus on the re-evaluation of the country’s foreign policy direction, economic initiatives, and the establishment of new alliances and strategic partnerships,” said Manhit.

Manhit also highlighted the importance of choosing the right leaders who have a “solid plan” and would pass crucial policies to achieve human security—which he said covers many areas that affect the daily lives and prospects of Filipinos.

“We the people should be more aware of its scope, and we should demand that the candidates vying for our votes should clearly reveal how they plan to attain human security if they get elected,” he said.

“Security comes in many forms. Our best bet is a leader who understands the depth, breadth, and complexity and how human security will be guaranteed for all Filipinos,” he added.

In exactly three weeks and five days from now, the country’s future will be at the hands of millions of eligible voters who are expected to determine the country’s next leaders.