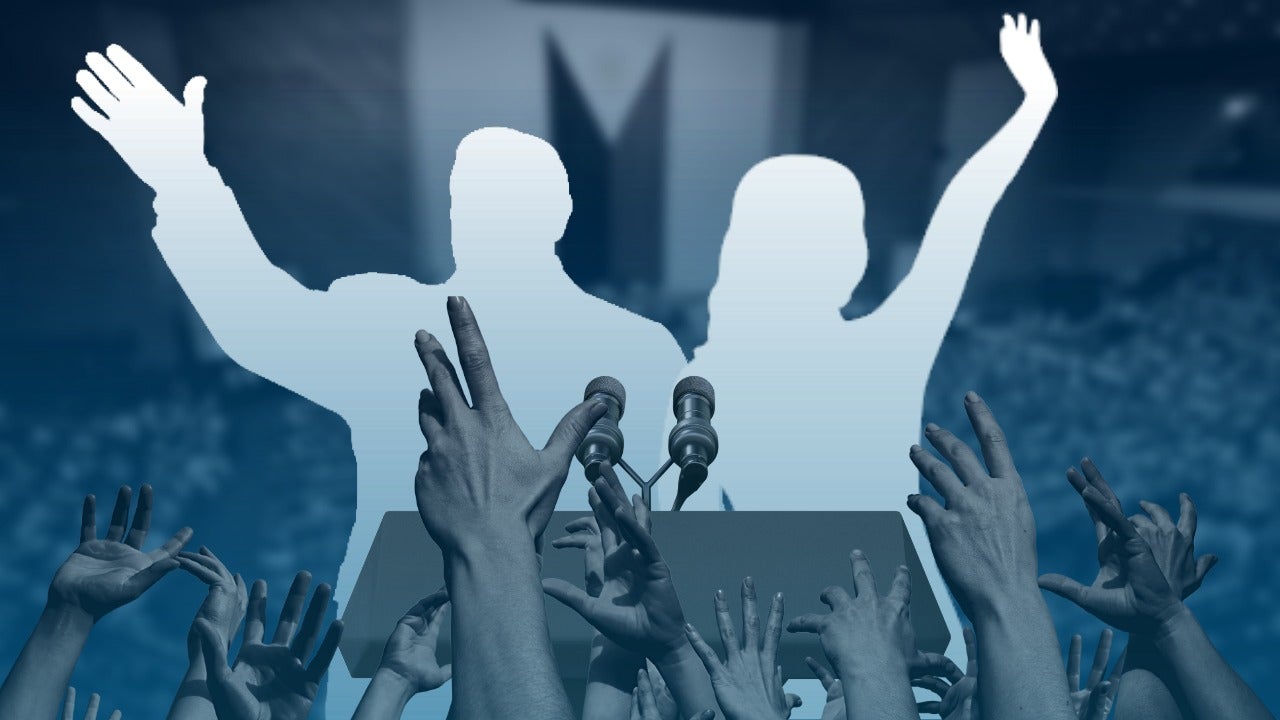 MANILA, Philippines—To address the challenges that will be faced by the Philippines’ next leaders, a study highlighted that the new administration must also develop a responsive and strategic foreign policy that would prioritize national sovereignty, territorial integrity and developmental interests.

Aside from addressing the domestic issues unresolved by the current and previous administrations—including foreign indebtedness and the socioeconomic impact of the COVID-19 pandemic—the country’s new leaders are also expected to face several geopolitical challenges which may affect Philippine foreign policy.

The study, entitled “A Responsive and Strategic Foreign Policy Outlook in an Interconnected and Multipolar World” by Professor Victor Andres “Dindo” Manhit, argued that the country’s next leader must “must craft a responsive and strategic foreign policy to reverse the losses caused by the flippant policy of the current administration.”

It added that the next president and his or her administration should focus on strengthening linkages with “like-minded states” to counter threats coming from China and other traditional and non-traditional security challenges.

“The new foreign policy that needs to be crafted needs to prioritize the country’s national sovereignty, territorial integrity, and developmental interests,” said Manhit, who is also president and CEO of think tank Stratbase ADR Institute.

“At the same time, as part of an interconnected and networked international society, this more responsive and strategic foreign policy will effectively contribute to ongoing efforts to collectively manage global and regional issues.”

“Fostering multilateral and strategic partnerships is imperative if the Philippines is to recover from the consequences of the current administration’s foreign policy decisions and be rightly aligned with the growing global alliance advancing a free and open Indo-Pacific,” said Manhit.

According to another study, entitled “A Search for Independence in President Duterte’s Foreign Policy,” the current administration has maintained that it is pursuing an independent foreign policy.

However, “many many experts have criticized the administration’s supposed strategy for its lack of clarity and position,” wrote Denise Layla Miriam, whose paper was also cited in Manhit’s special study.

These three core principles were:

“President Duterte launched diplomatic initiatives to build new alliances and bring the Philippines closer to non-traditional partners such as China and Russia despite the public concerns and issues in the West Philippine Sea,” said Manhit.

“The Duterte administration also announced its separation from the United States, an unforeseen move that challenged the region’s strategic balance. President Duterte, in particular, further pushed the war narrative where small states cannot respond to major powers such as China and confronting them would only lead to war,” he added.

Manhit said the Duterte administration’s foreign policy decisions failed to put the country’s position and ability at a vantage point to contribute to regional stability and positively affect its alliances and strategic partnerships.

“Given the remaining months of the current administration, the Philippine government should start prioritizing multilateral and inclusive cooperation with other like-minded states to uphold the rule of law and prevent any unilateral action that can undermine peace and stability in the Indo-Pacific,” said Manhit.

Among the list of recommendations by Manhit for the new administration was for the United States to remain a primary ally of the Philippines, which he said is “key to rallying support from the international community to counter China’s continued aggression in disputed waters.”

“The defense agreements with the United States must be revisited to ensure maximal inter-operability vis-à-vis new and emerging threats,” Manhit said in his paper. 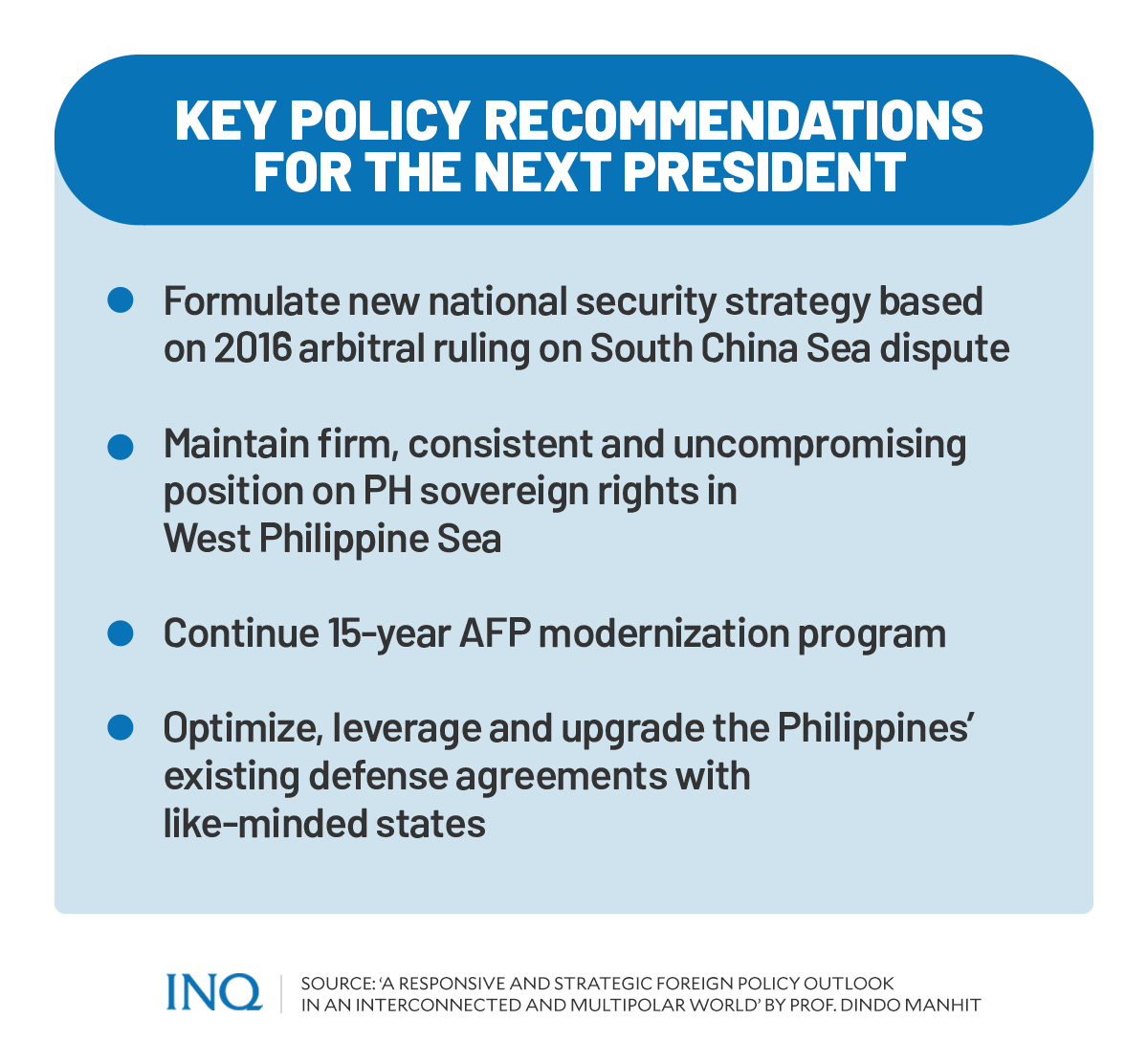 He likewise recommended the immediate formulation of a new national security strategy based on the July 12, 2016 Arbitral Ruling on the South China Sea Dispute and to maintain a firm, consistent and uncompromising position in terms of the Philippines’ sovereign rights in the West Philippine Sea.

Manhit also suggested the continuity of the 15-year, three-phased Armed Forces of the Philippines (AFP) modernization program, with greater focus on the acquisition of advanced naval, aerial, and strategic defense assets in cooperation with key allies and strategic partners.

Other recommendations made by Manhit in his study include:

The paper also mentioned that the next administration must consider examining or incorporating best practices from global and regional economic initiatives, such as:

The study also highlighted some Indo-Pacific strategies that should be considered by the new administration such as:

“The paper concludes that, under a new leadership, a future-oriented, responsive, and strategic Philippine foreign policy must entail the configuration of the country’s national interest vis-à-vis the uncertainties about the current international order and lessons learned from the Duterte administration,” Manhit wrote.

“Most significantly, it must consider economic diplomacy as one of the principal means to harness the contribution of both state and non-state actors in national development and international diplomacy,” he went on.

“The 2022 national elections thus provide an opportunity for the Philippines to re-evaluate the direction of its foreign policy, strategic alliances, and partnerships, as well as its role in global and regional affairs.“

James Carouso, senior adviser for the Bower Group and Australia Chair for the Center for Strategic and International Studies, said that pressure from China because of the South China Sea issue should be an area of greater cooperation between the US and the Philippines. 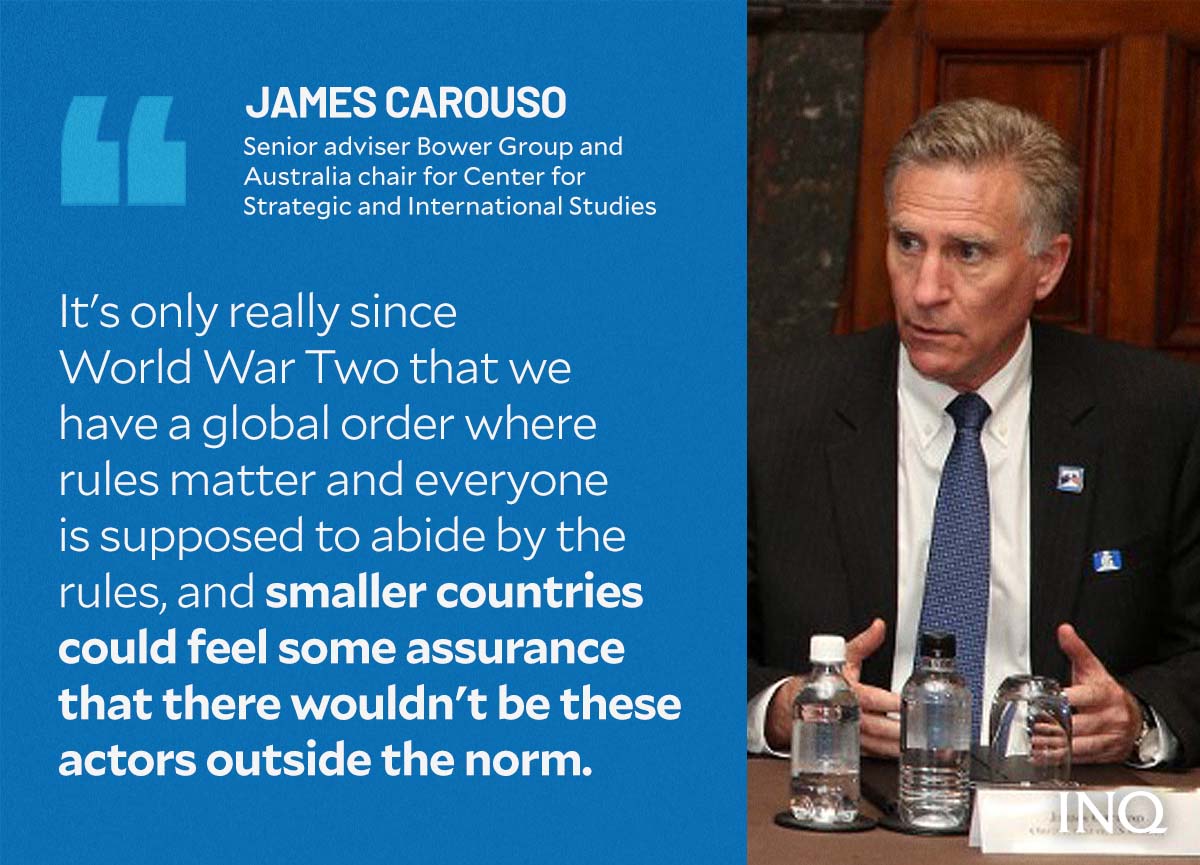 “This is so we understand the nature of the threat and know what we do about it,” he said.

“It’s only really since World War Two that we have a global order where rules matter and everyone is supposed to abide by the rules, and smaller countries could feel some assurance that there wouldn’t be these actors outside the norm,” Carouso said.