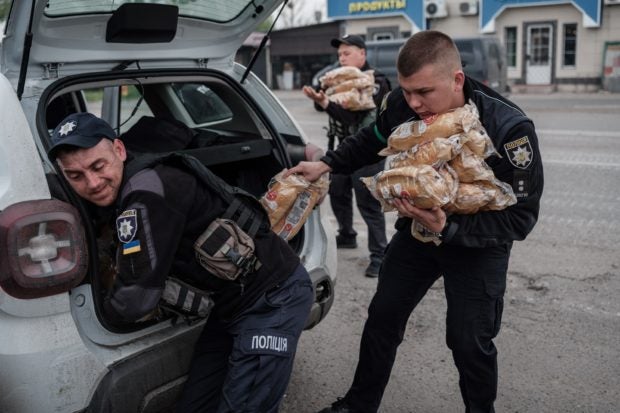 Police officers unload bags of bread to be ditributed to the evacuees from Lyman, upon their arrival on a bulletproof bus in Raihorodok, eastern Ukraine, on May 2, 2022, amid the Russian invasion of Ukraine. AFP

LYMAN, Ukraine—Gripping a match between his teeth and the steering wheel with both hands, Nikolai Mavsissan gives fair warning to passengers before embarking on a frenzied and dangerous humanitarian mission in eastern Ukraine.

“I’m going to drive very quickly,” says the young buzz-cut driver in a black jacket, turning his van in the direction of Russian troops on a forest road towards the front line.

The Ukrainian volunteers and police in his van have just a short window of time to deliver bread and evacuate remaining residents in the town of Lyman, whose capture by invading Russian forces is only a matter of time.

Their lightning mission has not been coordinated with Russian troops, whose relentless shelling has reduced hamlets around Lyman to rubble.

“They shell so much, including us. The bombs land everywhere,” Mavsissan said, explaining his driving style.

Lyman is a ghost town. Trees are blossoming and Russian strikes arrive with a whistle as Mavsissan winds through the town’s deserted streets.

“Lower your head!” a policeman in the van shouts to passengers when one shell punches a hole in the road just metres away, flinging debris against the van’s side and puncturing a whole in one its reinforced windows.

“Yes, we’ll be there in two minutes,” says local police chief Igor Onenevenko, sending a voice message by phone to a family expecting a delivery of bread.

“The people who are still here are just crazy,” said Onenevenko, who has grown weary of these humanitarian missions as the security of the team becomes increasingly tenuous.

Four civilians were killed and seven more injured on strikes on the town, its mayor told AFP.

It’s a trend that has led to a change of heart among some who were determined to remain.

“Half of the town is destroyed,” said a local, lifting luggage on the roof of his beat-up Soviet-designed red Lada car.

“I don’t have a house anymore,” he explained.

He wasn’t the only one getting out while he could.

Twenty-two of the approximately 40 towns and villages surrounding Lyman have been captured by invading Russian forces, its mayor Oleksandr Zhuravlyev told AFP.

The glory days of the former industrial centre with a pre-war population of around 20,000 people may be gone, but it remains a key prize for Russian forces.

It is the last obstacle for Moscow’s army on the road to Sloviansk, a major urban hub in the eastern Donbas region whose capture would be a significant Russian gain.

A railway bridge that spans the Donets river on the way to Sloviansk was already destroyed last week by a Russian rocket, Ukrainian soldiers told AFP.

Two train cars of goods had plunged into the gray waters of the Donets river due to the attack.

It is laden with explosives to slow Russian troops if they make it this far.

In the woods nearby, a unit of military engineers waits for orders to blow the bridge.

“It could come in an hour or it could come tomorrow. The last soldiers will cross and we’ll have to blow it up,” one soldier, going by the nom de guerre of “The Engineer,” told AFP.

Kyiv’s army hopes destroying the bridge could win them two weeks before Russian troops find a route to a showdown for Sloviansk.

“It’s never easy to destroy one of your own pieces of infrastructure. But between saving a bridge or protecting a city, there no question at all,” he said.

Read Next
Duterte’s pick as next PNP chief out by Tuesday
EDITORS' PICK
What to watch out for when selecting a video surveillance solution
Palace warns sugar hoarders after raid on Pampanga warehouse
Metro Manila’s COVID-19 cases on downward trend, but surge not over — OCTA
Unleash the photographer in you this World Photography Day with vivo smartphones
House energy committee chair Arroyo bats for cheap electricity
Look Through: The fate of impounded stray dogs
MOST READ
WATCH: Rick Astley re-creates ‘Never Gonna Give You Up’ music video 35 years later
DOJ indicts bank officer in $2.1 billion Wirecard fiasco
LOOK: Miel Pangilinan dazzles in glittery pre-debut shoot
Man abducted in Batangas gasoline station, found dead in Quezon
Don't miss out on the latest news and information.