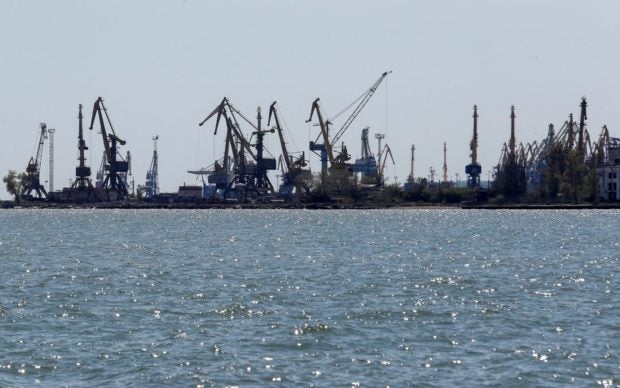 A view shows a port in the course of Ukraine-Russia conflict in the southern city of Mariupol, Ukraine April 29, 2022. REUTERS FILE PHOTO

The Azov Sea ports of Mariupol, Berdiansk and Skadovsk and the Black Sea port of Kherson were closed “until the restoration of control”, the ministry said in a statement.

“The adoption of this measure is caused by the impossibility of servicing ships and passengers, carrying out cargo, transport and other related economic activities, ensuring the appropriate level of safety of navigation,” it said.

All Ukrainian seaports have suspended their activity as a result of the Russian invasion in late February. Russian forces captured some ports and blockaded others.

Ukrainian President Volodymyr Zelensky said on Monday Ukraine could lose tens of millions of tonnes of grain due to Russia’s control of Black Sea shipping, triggering a food crisis that will affect Europe, Asia and Africa.

“Russia does not let ships come in or go out, it is controlling the Black Sea,” Zelenskiy told the Australian news programme 60 Minutes.

Russia calls its intervention in Ukraine a “special operation” to disarm Ukraine and protect it from fascists. Ukraine and the West say the fascist allegation is baseless and that the war is an unprovoked act of aggression.

Ukraine, a major agricultural producer, used to export most of its goods by sea but has been forced to switch to export by train via its western border or via its small Danube river ports.

It said the volume included 763,000 tonnes exported in April but gave no comparative figures. Senior agriculture officials said this month that Ukraine exported up 300,000 tonnes of grain in March.

Read Next
Robredo: No more reason for De Lima to remain in detention
EDITORS' PICK
What to watch out for when selecting a video surveillance solution
Palace warns sugar hoarders after raid on Pampanga warehouse
Metro Manila’s COVID-19 cases on downward trend, but surge not over — OCTA
Unleash the photographer in you this World Photography Day with vivo smartphones
House energy committee chair Arroyo bats for cheap electricity
Look Through: The fate of impounded stray dogs
MOST READ
WATCH: Rick Astley re-creates ‘Never Gonna Give You Up’ music video 35 years later
Man abducted in Batangas gasoline station, found dead in Quezon
DOJ indicts bank officer in $2.1 billion Wirecard fiasco
PNP bars US legislators’ visit to De Lima due to lack of authority from court
Don't miss out on the latest news and information.