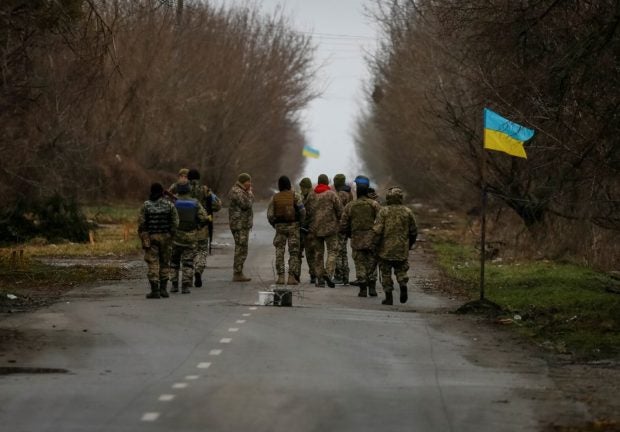 Ukrainian service members walk near a Ukrainian flag, amid Russia’s invasion of Ukraine, in the village of Kozarovychi, in Kyiv region, Ukraine April 2, 2022. REUTERS

KYIV—Fourteen Ukrainians including a pregnant soldier have been freed in the latest prisoner exchange with Russian forces, Ukraine said on Saturday, without revealing the number of Russians returned to Moscow.

“Today, we carried out a new exchange of prisoners. Fourteen of ours are coming home, seven military and seven civilians. One of the military women is five months pregnant,” Deputy Prime Minister Iryna Vereshchuk said on Telegram.

In an interview with the BBC on Friday, Vereshchuk accused Russian forces of deporting large numbers of civilians into Russia and using them as “hostages”.

“That’s why they captured all these hostages — civilians, women, employees of local councils, to try and use them,” she was quoted as saying.

“We know there are more than a thousand hostages there — including almost 500 women,” she said, adding that they were being held in prisons and pre-trial detention centres.

She emphasized the difficulty of securing the liberation of women in the exchanges.

“Now we refuse to hold an exchange with no women in the list. That is how we try to somehow rescue our women and civilians,” she said.

Several exchanges between Moscow and Kyiv have taken place since Russia invaded on February 24.