In Haiti’s open gang wars, families caught in the crossfire 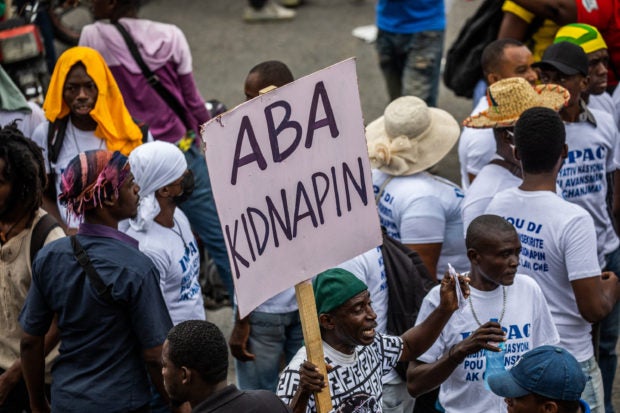 Haitians take to the streets to protest over the increasing insecurity in the Haitian capital Port-au-Prince, on March 29, 2022. AFP

PORT-AU-PRINCE —The simmering gang violence plaguing Haiti’s capital Port-au-Prince has exploded in recent days into open warfare, with at least 18 civilians killed amid reports of house burnings and rapes.

“Armed men of the ‘400 Mawozo’ gang set fire to my house” and “killed several of my neighbors before also burning their houses,” Lucien, who lives in the violent northern slums, told AFP.

“They rape women and girls when they manage to get into a house,” added Lucien, who preferred not to give his full name for fear of reprisals.

In a city where some districts are already dominated by crime rings, the violence of recent days forced Lucien to leave his home to take refuge with his sick mother in a public square on Tuesday.

Police said that at least 18 civilians have been killed since Sunday, including “a family of eight” as well as “three young women and three children.”

Like Lucien, several hundred people fled the area where the clashes were happening, including around 50 who took refuge in a public square “a few hundred meters from the front line,” police said.

Others remain trapped in their homes. Among them, one resident who preferred to remain anonymous said his little brother was hit by a “stray bullet in the leg on Sunday, while he was at home.”

“We were able to stop the bleeding but we can’t take the risk of taking him to the hospital and we don’t have any medicine to relieve his pain either,” said the man, who is in his twenties.

Trapped with no food or water

With bursts of automatic gunfire ringing in their neighborhood for four days, the inhabitants are in dire straits.

“We have no more water or food,” one young woman said.

Her father, who suffers from diabetes and high blood pressure, “is currently in critical condition but we have no way to go and buy medicine and it’s too dangerous to travel with him.”

Long confined to the poorest seaside areas of Port-au-Prince, armed gangs have greatly increased their hold across the capital and even the country since late 2020, sending murders and kidnappings skyrocketing.

The powerful and feared “400 Mawozo” gang abducted a group of 17 North American missionaries and their relatives, including five children, last October.

The district where the violence has been centered is highly strategic, being the only road access to the north of the country as well as between Haiti’s capital and the Dominican Republic.

Since June, the authorities have also lost control of the only road connecting Port-au-Prince to the south: for a stretch of two kilometers (1.2 miles), the highway is completely under the control of armed criminals from the slums of Martissant.

In that poor neighborhood, the gangs forced the organization Doctors Without Borders to close the hospital it had been running for 15 years.

The national police, who lack the weapons to confront the much-better-armed criminal gangs, have so far done nothing to regain control of the southern entrance to the capital.

And since Sunday, the police have not tried to intervene in the violence-hit northern suburbs.

Authorities have not yet commented on the latest outburst of violence, which is paralyzing the north of the capital.