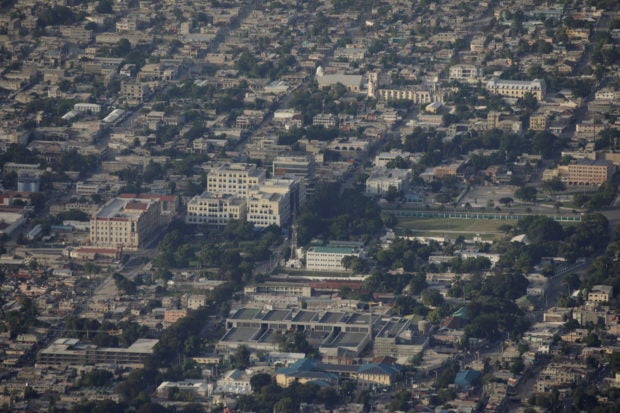 PORT-AU-PRINCE — When Haitian Prime Minister Ariel Henry attempted on Sunday to lead a ceremony commemorating the death of one of the country’s founding fathers, his delegation was met with a volley of gunfire that forced officials to withdraw.

It was a further sign of the growing power of the Caribbean nation’s gangs, who on Saturday kidnapped a group of Christian missionaries traveling near the capital, Port-au-Prince.

Gangs have become more comfortable committing crimes outside the territory they control since the assassination of President Jovenel Moise in July and an earthquake in August, said human rights activist Pierre Esperance.

“The government that has been in place for three months is powerless in the face of this,” Esperance, executive director of the National Human Rights Defense Network, said in a telephone interview.

“There is no plan, no way to fight insecurity. The national police force has not been strengthened.”

Sixteen U.S. citizens and one Canadian citizen were kidnapped while on a trip to visit an orphanage, the missionary group Christian Aid Ministries said in a statement on Sunday.

Security experts suspect the involvement of a gang known as 400 Mawozo that controls Croix-des-Bouquets, a commune about 8 miles (13 km) outside the capital.

Five priests and two nuns, including two French citizens, were abducted in April in Croix-des-Bouquets in a crime also suspected to be linked to 400 Mawozo. They were released the same month.

Sunday’s ceremony to honor Jean-Jacques Dessalines, who declared Haitian independence from France in 1804, had been planned for Pont-Rouge, the eastern entrance to downtown Port-au-Prince, where Dessalines was murdered in 1806.

Officials have struggled for years to hold the event there because of the presence of a gang coalition known as G9, led by former police officer Jimmy Cherizier, alias “Barbecue.”

Henry instead made a floral offering at the Museum of the Haitian National Pantheon in the capital.

A spokesperson for Henry’s Cabinet did not respond to requests for comment on the ceremony.

The impoverished country’s spike in kidnappings has come on top of worsening economic conditions and a growing diaspora of Haitians seeking better opportunities in other countries.

The United States last month deported some 7,000 Haitians who had attempted to enter the country via Mexico.

At least 628 kidnappings took place in Haiti in the first nine months of 2021, 29 of which involved foreigners, according to a report by the Haitian nonprofit Center for Analysis and Research in Human Rights, or CARDH.

The actual figures are likely much higher because many Haitians do not report abductions, fearing retribution from criminal gangs.

“The gangs are federated, they are well-armed, they have more money and ideology,” said CARDH Director Gedeon Jean. “We are heading toward a proto-state. The gangs are getting stronger while the police are getting weaker.”