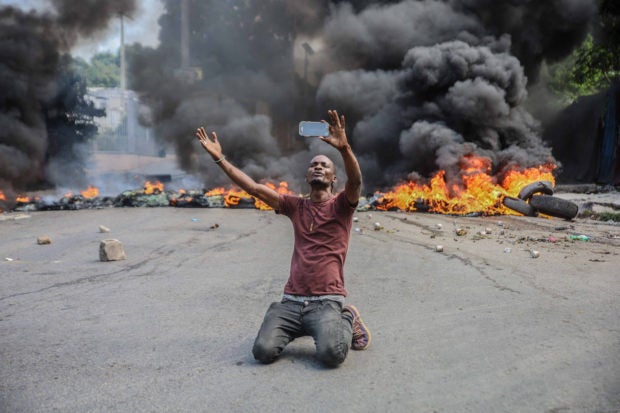 A man films himself in front of tires on fire during a general strike launched by several professional associations and companies to denounce insecurity in Port-au-Prince on October 18, 2021. AFP

PORT-AU-PRINCE — Last week’s kidnapping in broad daylight of 17 US and Canadian missionaries and their families in the Haitian capital highlighted criminal gangs’ growing hold on the country, fueled by a deep political crisis and the powerlessness of the judicial system.

Cases of kidnappings have more than doubled over the past year as gangs have grown increasingly numerous and powerful, leaving an already weak police force unable to cope.

In the most recent kidnapping on Saturday outside Port-au-Prince, members of the brazen 400 Mawozo gang are demanding $17 million for the release of the missionaries and their families, according to Haitian officials.

More than 600 cases of kidnappings for ransom were recorded in the first three quarters of 2021, compared to 231 during the same period last year, according to the Center for Analysis and Research in Human Rights, a Haitian civil society group.

Gangs have increased their hold on the country in recent years. More than 150 criminal groups, some of them previously dormant, were identified in the Caribbean country in 2019, according to Marie-Yolène Gilles of the Je Klere Foundation, a human rights group.

Today, they are too numerous to be counted, said Gilles, adding that “in each neighborhood, an armed man is there to be the leader.”

With no investigations conducted to trace the recipients of ransom payments, Haiti finds itself locked a vicious cycle where payoffs only help gangs thrive.

But in reality, the police force is much smaller.

Some agents are dispatched to guard public and private figures, while others have simply given up their posts and left to seek a better future abroad.

The police force is severely under-equipped and unprepared to take on the gangs that possess a veritable “war arsenal” that they are happy to showcase in videos on social media, said Marie-Rosy Auguste Ducena, from the National Human Rights Defense Network.

This creates a “climate of terror” among the population, but also makes it clear to the police that “each time they have to confront them, they risk dying,” added Ducena.

According to the Center for Analysis and Research of Human Rights, 37 police officers have died on duty so far this year, compared to 28 killed last year.

A year ago, the United Nations office in Haiti called on the government to bring the perpetrators of kidnappings to justice and to arrest several gang leaders who had been placed on official wanted lists.

But the men at the head of the violent groups, like Jimmy Cherizier, known as Barbecue, enjoy impunity.

A former police officer, Barbecue has been accused of involvement in several murders and arson attacks perpetrated since November 2017.

And although an official warrant has been in effect for Barbecue since 2019, he has been active on social media, recently calling for justice for President Jovenel Moise, who was assassinated in his residence by armed commandos in July.

In his tweets and videos, Barbecue poses regularly with an automatic weapon slung over his shoulder, calls for a revolution and urges Haitians to rise up against oligarchs who, he says, are to blame for poverty in the country.

Such posts collect not only insults, but also praise from some Haitian internet users.

“There is the strengthening of gangs in terms of weapons, ammunition, but above all ideology: this is the concern”, said Gedeon Jean, director of the Center for Analysis and Research of Human Rights.