Another 52,000 Ukrainians flee war as refugees 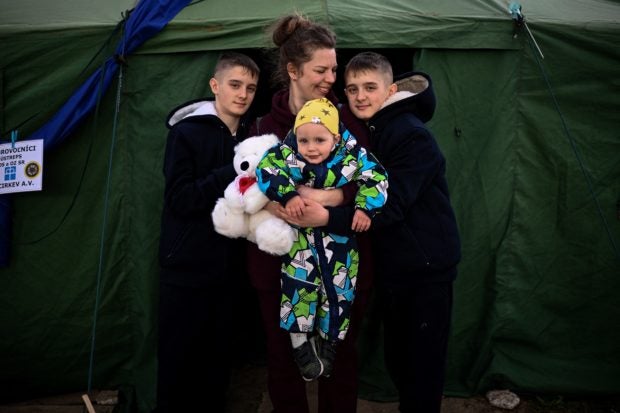 Ukrainian refugee Tetyana Dzymik (C), a 38-year-old drawing teacher from a village near Bucha, poses for a picture along with her children, twins Ivan and Danylo, and baby Oleksiy, as they stand at the entrance to an NGO tent after crossing the Ukrainian-Slovakian border into Slovakia at the Vysne Nemecke border crossing, eastern Slovakia on April 8, 2022. – A heartbreaking human drama is playing out along Ukraine’s borders — fleeing refugees pass the homesick going back, while others who left and then returned flee for their lives for a second time. (AFP)

GENEVA, Switzerland – More than 5.3 million Ukrainians have fled their country since Russia invaded two months ago, the United Nations said Wednesday, with more than 52,000 joining their ranks in the past 24 hours.

In total, 5,317,219 people have fled Ukraine as refugees since February 24, according to the latest data from the UN refugee agency, UNHCR.

That marks an increase of 52,452 over the figure given on Tuesday.

While the outflow has slowed significantly since March, UNHCR has projected that three million more Ukrainians could become refugees by the end of the year.

The exodus has been described as Europe’s fastest-growing refugee crisis since World War II, but a leading humanitarian warned Wednesday that even that was an understatement.

The large displacements back then happened “over a longer period,” he said.

In addition to the Ukrainian refugees, the UN’s International Organization for Migration (IOM) said an additional 224,975 citizens of third countries — largely students and migrant workers — have also escaped to neighbouring countries since the invasion began.

Women and children account for 90 percent of the Ukrainians who have fled abroad, with men aged 18 to 60 eligible for military call-up unable to leave.

Almost two-thirds of Ukrainian children have fled their homes.

Before the invasion, Ukraine had a population of 37 million in the regions under government control, excluding Russia-annexed Crimea and the pro-Russian separatist-controlled regions in the east.

Here is a breakdown of how many Ukrainian refugees have fled to neighbouring countries, according to UNHCR:

Many of them have travelled on to other states in Europe’s Schengen open-borders zone.

Before the war, Poland was home to around 1.5 million Ukrainians, chiefly migrant workers.

– Romania -A total of 793,420 Ukrainians have entered the EU member state as of April 26, including a large number who crossed over from Moldova, wedged between Romania and Ukraine.

The vast majority are thought to have gone on to other countries.

– Russia -Another 627,512 refugees have sought shelter in Russia, according to data last updated on April 26.

In addition, 105,000 people crossed into Russia from the separatist-held pro-Russian regions of Donetsk and Lugansk in eastern Ukraine between February 18 and 23.

– Moldova -The Moldovan border is the closest to the major port city of Odessa. A total of 437,362 Ukrainians have crossed into the non-EU state, one of the poorest in Europe, with a population of 2.6 million. Most have moved on.

– Slovakia -A total of 360,458 people had crossed Ukraine’s shortest border into Slovakia as of April 26.

– Belarus -Another 24,719 refugees made it north to Russia’s close ally Belarus as of April 26.

– Returns -At the same time, many Ukrainians have also travelled back into Ukraine. UNHCR said that between February 28 and April 26, Ukrainian border guards had registered 1,209,500 Ukrainians returning to the country.

UNHCR stressed though that “this figure reflects cross-border movements, which can be pendular, and does not necessarily indicate sustainable returns as the situation across Ukraine remains highly volatile and unpredictable.”