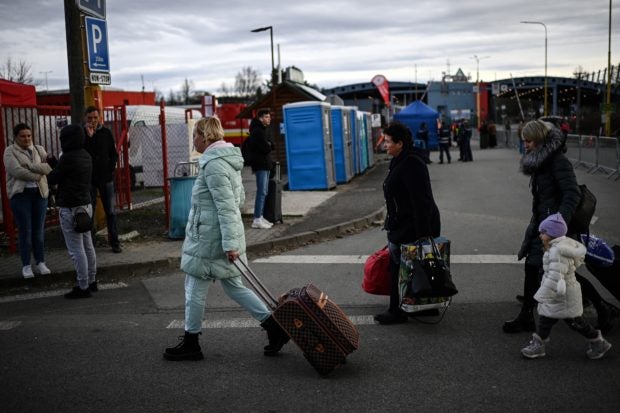 Ukrainian refugees pull their luggage as they look for transportation after crossing the Ukrainian-Slovakian border into Slovakia at the Vysne Nemecke border crossing, eastern Slovakia on April 8, 2022. AFP

SIGHETU MARMATIEI, Romania — A heartbreaking human drama is playing out along Ukraine’s borders — fleeing refugees pass the homesick going back, while others who left and then returned flee for their lives for a second time.

Women and children are still pouring out of a land being pummelled by what one called Russia’s “creatures from Hell”.

But hundreds of thousands of refugees are returning home, determined to stay.

Many others have had to flee for a second time, having thought it was safe to go back only to find it was not.

An AFP team has been travelling along the country’s frontiers to report the aftermath of the biggest exodus in Europe since World War II — more than five million people according to the United Nations.

They met Iryna Ustyanska carrying her suitcases across a bridge into Sighetu Marmatiei in Romania.

She and her two children were refugees for the second time in a month, having fled from Odessa to Bucharest after the invasion as Russian bombings drew close.

They decided to return home at the beginning of this month but were only back a few hours before Russian air strikes shook the strategic Black Sea port.

In the drizzle at Vysne Nemecke, a drab Slovakian border crossroads, Tetyana Dzymik talked to anyone who would listen.

The 38-year-old fled her village near Bucha, a quiet commuter town near Kyiv now notorious after Russian troops were accused of massacring civilians there.

“Who does these kinds of things? Not humans, only creatures from Hell,” she said through her tears. Distraught, she told how Russian soldiers ransacked homes in her village, smashing windows and doors and defecating in bedrooms and sitting rooms.

More than a million people are estimated to have returned to Ukraine after fleeing.

One of them was Kateryna Bolotova, who turned up smiling one sunny day at the small Moldovan border post in Palanca.

In one hand she held her two dogs on leads and in the other a suitcase with a Ukrainian flag sticking out the top.

After five weeks in Germany, she was returning to her hometown of Odessa.

“I miss my husband, my country,” said the lawyer.

In Germany “everybody has been very generous to me but I couldn’t stay. I need to be here.”

If she ever has to flee Odessa again, she won’t leave Ukraine, Bolotova insisted.

In Chisinau in Moldova, Viktoria Logvynova, a sprightly Ukrainian woman in her 80s, is stuck in a refugee reception centre.

“I didn’t want to leave Kharkiv, my daughter made me,” said the former music teacher.

Ukraine’s second city is taking the brunt of the new Russian offensive.

“Even if the city is dying, I want to die with it,” Logvynova said from her wheelchair.