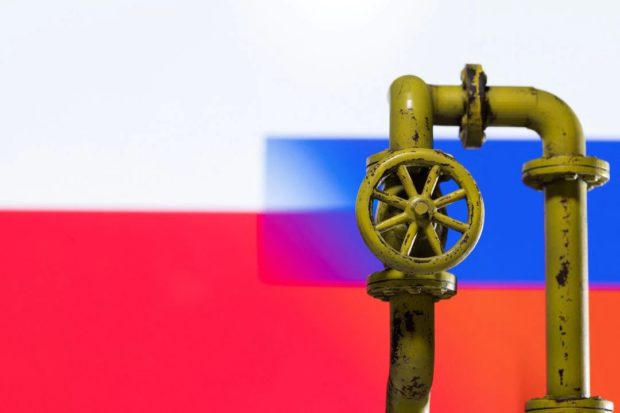 A model of the natural gas pipeline is seen in front of displayed Polish and Russian flag colors in this illustration taken April 26, 2022. REUTERS

WARSAW/SOFIA/KYIV — Russia will on Wednesday stop supplying gas to Poland and Bulgaria, the two Nato and EU members said, an escalation in the deepening rift between the West and Moscow over Ukraine as tensions also surged in neighboring Moldova.

Kyiv accused Moscow of blackmailing Europe and of trying to drag Moldova into the conflict after authorities in the Moscow-backed region of Transdniestria said they had been targeted by a series of attacks.

Staunch Kremlin opponent Poland is among the European countries seeking the toughest possible sanctions against Russia for invading its neighbour.

Poland’s state-owned PGNiG (PGN.WA) said supplies from energy giant Gazprom (GAZP.MM) via Ukraine and Belarus will be cut at 0800CET (0600GMT) on Wednesday, but Warsaw said it did not need to draw on reserves and its gas storage was 76% full.

Russian President Vladimir Putin has called on “unfriendly” countries to pay for gas imports in roubles, a move only a few buyers have implemented so far.

“The ultimate goal of Russia’s leadership is not just to seize the territory of Ukraine, but to dismember the entire centre and east of Europe and deal a global blow to democracy,” Ukraine’s President Volodymyr Zelensky said late on Tuesday.

His chief of staff, Andriy Yermak, said Russia was “beginning the gas blackmail of Europe”.

“Russia is trying to shatter the unity of our allies,” Yermak said.

Bulgaria, which is almost completely reliant on Russian gas imports, said it had fulfilled all its contractual obligations with Gazprom and that the proposed new payment scheme was in breach of the arrangement.

It has held initial talks to import liquefied natural gas through neighbouring Turkey and Greece.

Gazprom said it had not yet suspended supplies to Poland but that Warsaw had to pay for gas in line with its new “order of payments.” It declined to comment regarding Bulgaria.

The invasion of Ukraine, launched on Feb. 24, has left thousands dead or injured, reduced towns and cities to rubble, and forced more than 5 million people to flee abroad.

Moscow calls its actions a “special operation” to disarm Ukraine and protect it from fascists.

Ukraine and the West say this a false pretext for an unprovoked war to seize territory in a move that has sparked fears of wider conflict in Europe unseen since World War Two.

Russia’s ambassador to the United States has warned Washington to stop sending arms to Ukraine, saying that large Western deliveries of weapons were inflaming the situation.

Russian foreign minister Sergei Lavrov warned late on Monday that: “Nato, in essence, is engaged in a war with Russia through a proxy and is arming that proxy. War means war,” saying the risks of nuclear conflict should not be underestimated.

U.S. Pentagon spokesman John Kirby said there was no reason for the conflict in Ukraine to escalate to nuclear war. “A nuclear war cannot be won and it shouldn’t be fought,” he said.

In Transdniestria, an unrecognized sliver of land bordering southwestern Ukraine, authorities said explosions had damaged two radio masts that broadcast in Russian and that one of its military units had been attacked.

Reuters could not independently verify the accounts. The Kremlin, which has troops and peacekeepers in the region, said it was seriously concerned.

If confirmed, that would represent a significant Russian advance.

One of Putin’s closest allies, Nikolai Patrushev, said Ukraine was spiralling towards a collapse into “several states” due to what he cast as a U.S. attempt to use Kyiv to undermine Russia.

More than 40 countries met in Germany to discuss Ukraine’s defence.

Mark Milley, chairman of the U.S. Joint Chiefs of Staff, told reporters while flying to Tuesday’s meeting that the next few weeks in Ukraine would be “very, very critical”.

In potential humanitarian relief, Putin agreed “in principle” to U.N. and International Committee for the Red Cross (ICRC) involvement to evacuate civilians from a besieged steel plant in Mariupol, according to the United Nations.