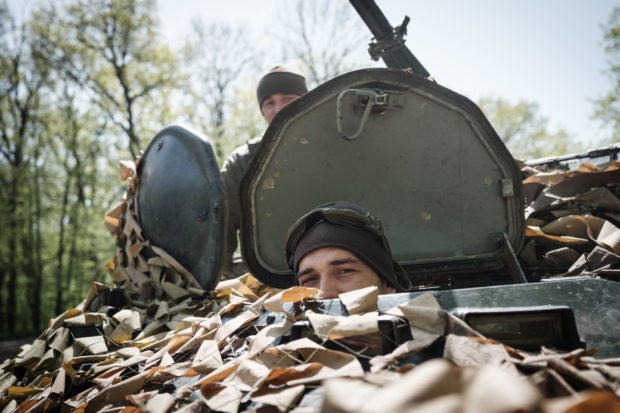 Ukrainian soldiers sit on a Armoured personnel carrier (APC) near Sloviansk, eastern Ukraine, on April 26, 2022, amid the Russian invasion of Ukraine. AFP

Putin has ‘hope’ for negotiations

Russian President Vladimir Putin tells the visiting UN chief Antonio Guterres that he still has hope for negotiations to end the conflict in Ukraine.

“Despite the fact that the military operation is ongoing, we still hope that we will be able to reach agreements on the diplomatic track. We are negotiating, we do not reject (talks),” Putin tells Guterres.

Guterres, who is seeking to mediate in the conflict, is on his first visit to Moscow since the war began and is then to travel to Kyiv for talks with Ukrainian President Volodymyr Zelensky.

Defence ministers of 40 countries hold talks at a US airbase in Germany on boosting arms supplies to Ukraine.

The United States and its allies will meet once a month to discuss Ukraine’s defence needs, US Defense Secretary Lloyd Austin says afterwards.

The United States has been pushing its allies to provide Ukraine with heavy weapons.

US Secretary of State Antony Blinken tells Congress that Putin has shown “no sign” he is “serious” about diplomacy, but by giving Ukraine the means to fight the invasion Washington can help “strengthen their hand” when meaningful talks do take place.

His perceived reluctance to break with Germany’s historic policy of detente towards Moscow had drawn fierce criticism from Kyiv and caused tensions with his coalition partners.

“It took some effort but the Soviet sculpture of the two workers — symbolising the reunification of Ukraine and Russia — was dismantled this evening,” Kyiv mayor Vitali Klitschko says in a statement on social media.

Fears of the conflict spilling over into Moldova rise after a series of blasts in its breakaway Russian-backed Transnistria region, which borders western Ukraine.

Authorities in Transnistria say two explosions on Tuesday morning damaged a radio tower relaying Russian stations near the Ukrainian border, and that on Monday evening the offices of the state security ministry were hit in a suspected grenade attack.

A Russian military chief last week angered Moldova by referring to the “oppression” of Russian speakers in Moldova, an argument used by Moscow to justify its invasion of Ukraine.

French Foreign Minister Jean-Yves Le Drian tells his Moldovan counterpart Nicu Popescu France fully backs the country’s territorial integrity “in the face of the destabilisation risks to which it may be exposed”.

“On April 26, 2022, Gazprom informed PGNiG of its intention to completely suspend deliveries under the Yamal contract… on April 27,” PGNiG said, adding that Poland was prepared to obtain necessary supplies from other sources.Over 8 million refugees expected

The UN says nearly 5.3 million Ukrainians have fled the country since Russia invaded and warns that three million more could follow by the end of this year.