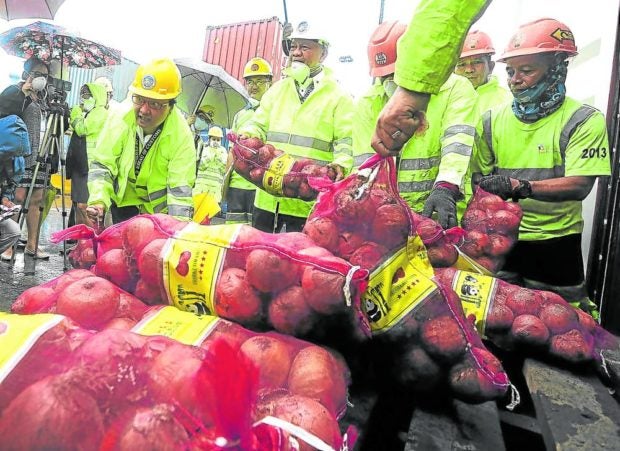 BAD FOR FARMERS | Officials of the Bureau of Customs find P4.5 million worth of smuggled onions from China that were declared to be ceramics. (FILE PHOTO)

MANILA, Philippines — Justice Secretary Menardo Guevarra on Tuesday said he had ordered the National Bureau of Investigation to look into the reported unabated smuggling of agriculture products from China as revealed during a Senate investigation.

“I have also directed our state prosecutors to check their dockets and speed up the preliminary investigation of agricultural smuggling complaints, if there be any, and pursue their prosecution in court,” Guevarra said in a Viber message.

According to him, the Department of Justice (DOJ) and Anti-Red Tape Authority were already working together to file appropriate charges against private individuals and government officials allegedly behind the illegal entry of vegetables and other agricultural commodities.

The DOJ, he said, would bring administrative and criminal cases against those involved in smuggling.

Guevarra added that there was a report that palm oil imported as animal feeds had been “converted and utilized” as ordinary vegetable cooking oil.

Last month, senators said several high-ranking public officials, among them unnamed politicians, were suspected of facilitating the unlawful entry into the country of vegetables from China.

The senators lamented that the rampant smuggling of vegetables and fruits had brought the local industry to the brink of collapse.