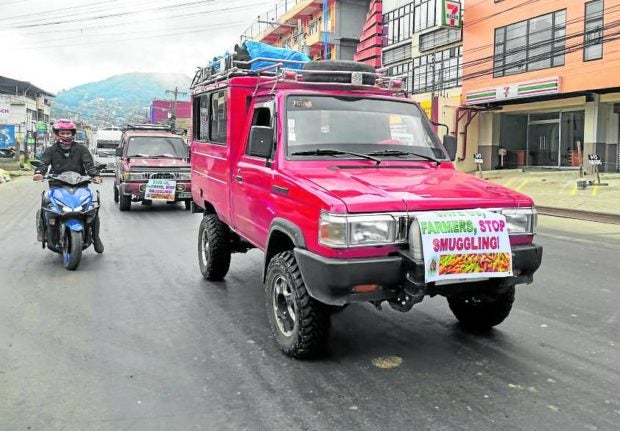 MOVING PROTEST A banner taped to a delivery truck joining a caravan on Monday in La Trinidad town, Benguet calls for protection of local farmers from the rampant smuggling of vegetables that is “killing” farmers. (Photo by KIMBERLIE QUITASOL /Inquirer Northern Luzon)

LA TRINIDAD, Benguet, Philippines — At least 250 delivery trucks drove through the main road in this town on Monday for a caravan to protest the continuous smuggling of vegetables and other crops from China at the expense of local growers.

The trucks carried banners calling on authorities to protect farmers by ending the widespread smuggling of vegetables into the country.

Vegetable trader Linda Balanggoy said smuggled crops were still being spotted in major markets in the country despite a Senate investigation into the deluge of smuggled vegetables. 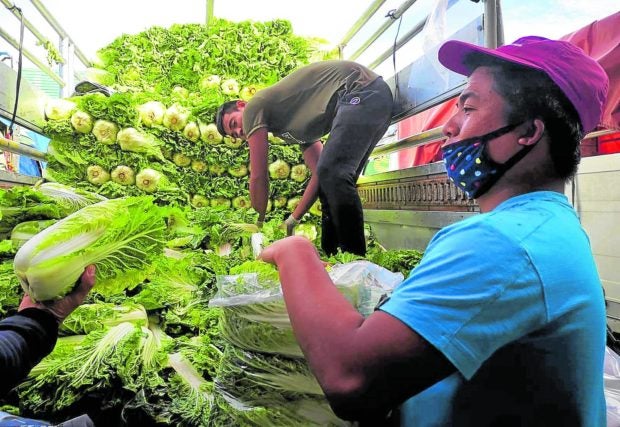 HIGHLAND CROPS | Benguet farms continue to produce the semi-temperate vegetables that traders sell at the Baguio market or ship down to Metro Manila and its neighboring communities in this photo taken on Jan. 4. (Photo by EV Espiritu / Inquirerr Northern Luzon)

“Smuggling is more brazen now than ever. In previous years, those peddling smuggled carrots do it covertly, usually at night under the cover of darkness. But now they do it in broad daylight,” Balanggoy told the Inquirer.

Balanggoy said locally grown carrots, while of superior quality, could not compete with the smuggled ones sold at a cheaper price. As of Monday, farm-gate prices for homegrown carrots fetched between P40 and P45 per kilo and were sold in public markets at P90 to P100 a kilo while those from China were sold at P60 a kilo.

Agot Balanoy, spokesperson for League of Associations at the La Trinidad Vegetable Trading Post, said they were disappointed over the seeming inaction of the government to their woes.

The group’s investigation showed smuggled carrots were directly delivered to various markets across the country, including Divisoria in Tondo, Manila; Sariaya town in Quezon province; and Urdaneta town in Pangasinan province. 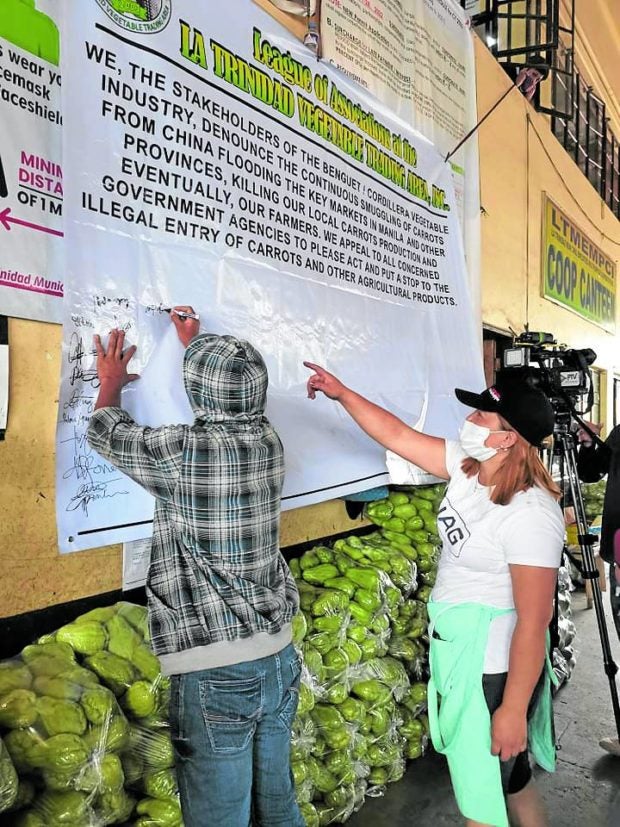 FARMERS’ PLEA A vegetable trader in La Trinidad town, Benguet signs a “unity statement” on Monday urging the government to put an end to the unabated smuggling of vegetables in the country. (Photo by KIMBERLIE QUITASOL / Inquirer Northern Luzon)

“Our farmers are not subsidized by the government; they cannot compete with the low price of smuggled carrots,” said Rudy Bulawan, president of Benguet Vegetable Truckers and Traders Association.

The farmers’ caravan culminated at La Trinidad Trading Post where farmers and vegetable traders signed a “unity statement” denouncing the continued smuggling of carrots from China.