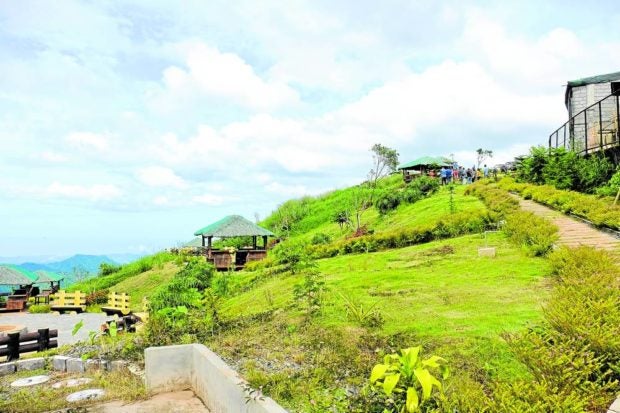 The old Irisan dump in Baguio City has been converted into an eco-park after it collapsed in 2010 when it breached its capacity. Baguio’s 350,000 residents generate an average of 400 metric tons of waste daily, prompting the local government to manage its trash by planning to collect fees from visitors and students who contribute to the city’s worsening garbage woes. (Photo by NEILA CLARK ONGCHANGCO)

BAGUIO CITY, Benguet, Philippines — Tourists may soon be asked to pay an additional P10 or P20 to their hotel fees to manage the waste they generate while visiting the city, officials said on Monday.

Tuition charged by universities may also include P120 in annual garbage fees so each student, many of whom reside outside the city, could contribute to the summer capital’s cleanup.

Households would have to pay a minimal garbage fee that would be commensurate to the volume of their week’s trash under a “pay-as-you-throw” system, which was recommended by Saint Louis University economics professor Gladys Navarro.

Navarro was commissioned by Mayor Benjamin Magalong to conduct a cost-benefit analysis of various waste management solutions being contemplated by experts.

These options, which were outlined by Navarro during the executive-legislative meeting on Monday, were being considered by the Baguio government, which has been spending up to P170 million each year to haul rubbish to a landfill in Tarlac province.

Magalong asked the city council to prioritize the drafting of a waste management plan using inputs from the study, which could be enforced after the May elections, regardless of who wins.

“The 2019 urban carrying capacity study of Baguio says our solid waste management threshold was breached in 1994. We haven’t solved this problem in 28 years. Shame on us,” Magalong said.

Included in the list of solutions is the full privatization of Baguio waste management, which may require a P3-billion investment from a contractor.

But while a study survey concluded that the majority of Baguio responders were willing to pay a theoretical fee of P10 for 10 kilos of trash each week, it also learned that many more respondents objected to a corporate waste manager.

Some of these options have been tried in smaller towns like Bontoc town in Mountain Province.

The subject of a writ of kalikasan in 2012 because of an open dump near the Chico River, Bontoc had been charging each household up to P600 in garbage fees annually, Navarro said.

Baguio generates an average of 400 metric tons of waste, and about 140 tons of nonbiodegradable rubbish have been shipped to commercial landfills since 2012 after the city’s only open dump was decommissioned.

The dump at Barangay Irisan was forcibly closed in 2010 by residents when it breached its capacity.

In 2011, the dump collapsed following a storm, killing five people including a pregnant woman, and spilling decades-old trash onto settlements straddling Baguio and neighboring Tuba town in Benguet. The dump has been converted into an ecological park 10 years later.

But the city’s garbage continued to increase, partly due to the growing population, which now stands at 366,358 as of the 2020 census, in a city designed and built for only 25,000 people.

Navarro said Baguio also hosts a daytime population of 750,000 transient workers, students, businessmen and leisure travelers who leave behind trash at the end of each day.

City Administrator Bonifacio dela Peña said the city’s smart city system and a tourism surveillance platform called Visita (Visitor Information and Travel Assistance) could charge environmental fees to cover day tourists who leave their trash behind. Every tourist is required to register at Visita, which schedules all trips to the city.

In 2019, Magalong, a first-term mayor, pursued a waste-to-energy project sponsored by the Department of Energy and the Japanese government when he began planning out Baguio’s redevelopment.

But the program was shelved after Japan’s Toyo Engineering Corp. suffered losses due to the coronavirus pandemic, the mayor said.

Instead, Baguio and the Philippine National Oil Co.’s Energy Development Corp. have been shepherding a similar project in Sablan town, also in Benguet, which is being negotiated by businessman Robert John Sobrepeña.