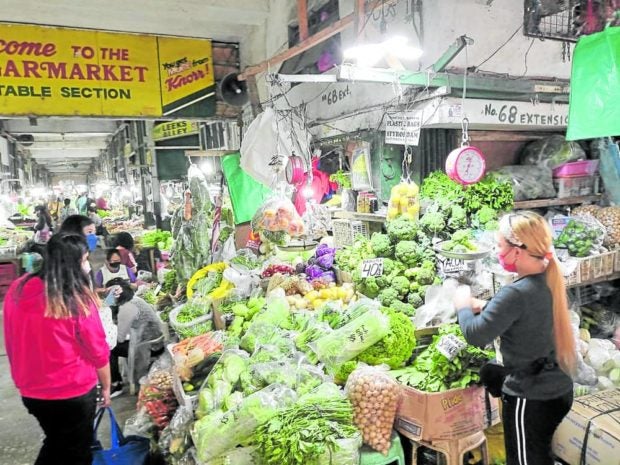 NATURALLY FRESH | Vegetables harvested from farms in Benguet province are sold in Baguio City’s public market in this photo taken on Monday. Traders of highland vegetables are complaining about the continuous entry of smuggled produce into local markets at the expense of Filipino farmers. (ALLAN MACATUNO / Inquirer Northern Luzon)

MANILA, Philippines — High-ranking government officials, including unnamed politicians, are allegedly behind the illegal importation of vegetables from China that has pushed the local industry to the brink of collapse, senators said on Monday.

The Senate resumed its committee-of-the-whole investigation into the issues hounding the Bureau of Customs (BOC), focusing on the smuggling of agricultural products which was brought to the fore in December last year by the privilege speech of Senate President Vicente Sotto III.

Senators grilled BOC and Department of Agriculture (DA) officials for their supposed failure to stop the influx of imported agricultural products, mainly carrots, onions and strawberries, even after Sotto’s exposé.

“We have a situation where agencies take no action even when smuggling is brazenly committed. So aside from the fact that the BOC and the DA have been compromised, there are untouchables,” said Sen. Francis Pangilinan.

“Those involved must be close to the powers that be, which is why we now have this situation,” Pangilinan added.

Resource persons invited by the Senate hesitated to publicly disclose names, giving senators a hint of the influence the personalities wield in government.

During the hearing, Agriculture Assistant Secretary Federico Laciste Jr. confirmed that there were indeed “big-time” personalities involved in the illicit trade.

He said that “highly placed” personalities have been calling him to drop the charges, but clarified he did not heed them and went on to file charges against the suspects.

Pressed to identify the personalities, Laciste sought to divulge the names in an executive session, but this was turned down.

“If that will put you in trouble, you can write it down and we will be the one to handle it,” Sotto said.

“We at the (DA) will act swiftly and decisively to reprimand those involved among our ranks, officials and staff. If found guilty, we will file the appropriate administrative charges against these individuals,” Agriculture Secretary William Dar said in a statement.

Sotto also warned the public against consuming smuggled carrots from China, which might have been coated with formalin or formaldehyde, a chemical used for embalming, to keep these fresh.

“People should know that these carrots last two months because they’re probably treated with chemicals that are bad for the body. I wouldn’t be surprised if that’s formalin,” Sotto said.

Unlike Benguet produce that last only a few days, smuggled carrots believed to have originated from China stay fresh even while unrefrigerated, according to Agot Balanoy, public relations officer of the League of Associations at the La Trinidad Vegetable Trading Areas (LALTVTA).

Laciste acknowledged that carrots from China entering the Philippine marketplace must have been smuggled into the country.

“We haven’t accredited vegetables from China to enter our country. We only allow fruits from China,” he told the Senate hearing.

Balanoy said an influx of smuggled vegetables, particularly carrots, continued despite reports of confiscations made by concerned government agencies.

In August last year, Benguet farmers were able to gather evidence that smuggled carrots had flooded local markets to their detriment.

Balanoy said small warehouses near Divisoria market in Manila had allegedly been releasing imported vegetables to the market in Metro Manila whenever Benguet vegetable prices increase.

In a statement on Sunday, LALTVTA said local vegetable farmers were losing an average of P2.5 million a day with daily orders declining by up to 40 percent due to the influx of smuggled vegetables.

“Despite an ongoing Senate hearing on the illegal importation of agricultural products and despite lodging our formal complaints with the proper concerned government agencies, smuggling has not stopped, and smugglers are so brazen to continue the illegal trade to this day,” the group said.

LALTVTA is the biggest agriculture-related organization in Benguet with around 10,000 members.

Reacting to the supposed inaction of the DA on the China-sourced carrots flooding local markets, Sen. Panfilo Lacson said: “I will offer an explanation: Coming from law enforcement, if there is no action, something has been compromised.” Lacson is former chief of the Philippine National Police.

Lacson also rejected BOC and DA officials’ reasons on why they have not been making an outright seizure of smuggled products, citing legal technicalities.

“If you see that the vegetables are obviously smuggled, there’s such a thing as citizen’s arrest. Any citizen can seize the items and they can seek assistance from law enforcement to do so,” Lacson said.

Sen. Aquilino Pimentel III expressed disgust that “technical smugglers,” who are said to be backed by influential people in government, have become brazen with their illegal activities.