PH fishers in ‘hide-and-seek’ with Chinese ships at Scarborough 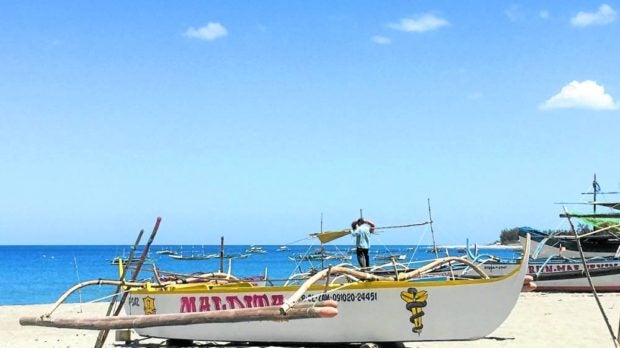 FISHING IS LIFE | A fisherman in San Antonio, Zambales, fixes his boat on the shores of Barangay San Miguel in this photo taken on March 15, 2022. Many fishers in the provinces of Zambales and Pangasinan brave rough waters and harassment from China’s Coast Guard so they can fish in Scarborough or Panatag Shoal and earn for their families. (JOANNA ROSE AGLIBOT / Inquirer Northern Luzon)

DAGUPAN CITY, Pangasinan, Philippines — For fishermen whose livelihood depends on the bounty of Scarborough Shoal, any attempt to enter its lagoon is still a “perilous” move while China’s Coast Guard continues to patrol the area.

But the Philippine Coast Guard (PCG) has also recently been patrolling the waters of Scarborough, locally called Panatag Shoal or Bajo de Masinloc.

In a statement last Friday, the PCG commandant, Vice Adm. Artemio Abu, said the increasing number of fishermen returning to the shoal, despite the presence of the Chinese ships, was “proof of our intensified efforts to safeguard Filipino fishermen who consider fishing as their primary source of livelihood.”

Yet according to fisherman Romulo Ferrer, he and the other fishers still play “hide-and- seek” with the Chinese coast guard.

“A Chinese Coast Guard vessel is always positioned at the entrance of the lagoon during the day, so we cannot come near, let alone enter the lagoon,” said the 51-year-old Ferrer of Barangay Cato in Infanta town, Pangasinan province.

“When the Chinese vessel leaves before dark, we would hurriedly sail toward the shoal, spending the night inside the lagoon to capture as many fish as we could, using a kawil (hook),” Ferrer told the Inquirer in a telephone interview on Sunday.

Local fishermen would sail to the disputed shoal on board a large vessel called a “mother boat,” which also carried smaller “service” boats that they would use to get inside the lagoon.

The 150-square-kilometer shoal is about 222 km from Masinloc town in the coastal province of Zambales, and therefore well within the country’s 370-km exclusive economic zone.

It is surrounded by rocks and reefs that serve as a buffer against waves, making it an ideal refuge for distressed fishermen during stormy weather.

Before daybreak, and under cover of darkness, the fishermen would scamper away from the lagoon to avoid causing trouble with the Chinese coast guard.

“The lagoon is a haven for us. It’s there that we get a bountiful catch,” said Ferrer, who was already fishing there even in his teens.

According to him, Filipino fishermen used to freely roam around the shoal’s lagoon and could go home with some three metric tons of high-value fish after two days of fishing. “Now we could only catch a metric ton,” said the fisherman, who is a member of a group of fishers called “Bigkis ng Mangingisda.”

He said the last time he ventured to the shoal was a week ago, while several other fishermen from Central Luzon provinces were at a safe distance.

“We kept our boats about 10 miles east of the entrance to the lagoon where the Chinese coast guard were patrolling. If we dared go near, they would shout, ‘No fishing! Chinese territory!” Ferrer said.

Late last month, some 45 fishing boats went to Scarborough Shoal while the PCG conducted what it called intensified maritime operations.

“Through our regular interaction, we assure them that the PCG will remain active and present in the area,” Abu said.

But for Bobby Roldan, a fisherman from Masinloc, “the threat of Chinese aggression is still there.”

He criticized what he called the “dangerous maneuvering” of the Chinese coast guard.

“This… should compel our government to lodge a strong diplomatic protest against China’s provocative act bordering on an actual military offensive,” said Roldan, who is Luzon vice chair of the fishers’ group Pamalakaya.

That possibility will “clearly happen with a Marcos presidency as he already vowed to continue Mr. Duterte’s policy,” said the Makabayan lawmaker, referring to former senator and presidential candidate Ferdinand “Bongbong” Marcos Jr., the front-runner in preelection surveys.

“Make no mistake, this kind of aggression will worsen if the next administration will again kowtow to China, and [that] may lead to more encroachment [of] our territory,” Zarate said in a statement.

He said China was “emboldened because of the Janus-faced foreign policy of the Duterte administration, which dangerously plays footsies with two competing imperialist powers, [China and the United States].”