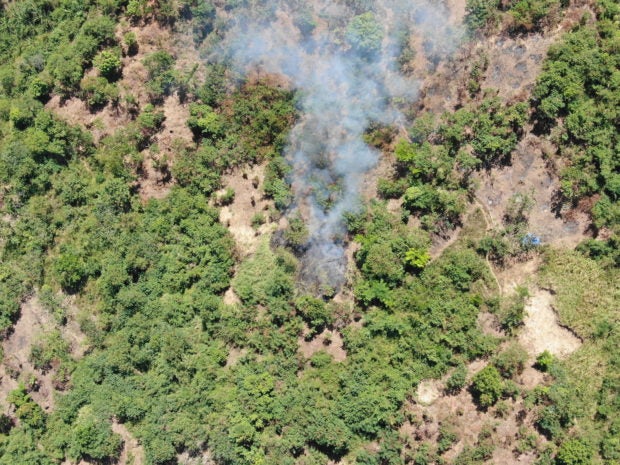 PROTECTED LANDSCAPE | An aerial photo from the Masungi Georeserve Foundation on May 13 shows smoke rising from a patch of land within the Upper Marikina River Basin Protected Landscape in Rizal province. This was one of several fires within the watershed since April reported by the foundation. (PHOTO COURTESY OF MASUNGI GEORESERVE FOUNDATION)

MANILA, Philippines — Malacañang on Tuesday called on the Department of Environment and Natural Resources (DENR) to probe the reported construction and expansion of resort facilities in the Upper Marikina Watershed and the Masungi Georeserve.

Acting presidential spokesperson Martin Andanar said the DENR should also investigate the alleged illegal quarrying and mining activities at the protected area of the Masungi Georeserve in Rizal province.

“Safeguarding the environment and natural resources is an important component in our sustainable development,” Andanar said in a statement.

He added that Malacañang was “concerned” about the reported illegal development activities in the area.

“We urge the (DENR) Anti-Illegal Logging Task Force to look into the matter and file the necessary charges against violators of environmental laws,” he said.

Last Feb. 18, two forest rangers were injured after they were attacked by alleged residents of Baras, Rizal.

The Masungi Georeserve Foundation (MGF) said one of the attackers was an employee of a resort that has received a cease-and-desist order from the DENR for building illegal structures inside the protected area.

MGF called on the DENR to make a clear stand and condemn the violent attacks against park rangers and threats against other members of the community allegedly committed by resort owners in the reforestation area.

“Our lives are in danger,” Ann Dumaliang, trustee and project manager of the foundation, told the Inquirer in February, lamenting the lack of “proactive action” from the DENR.

Dumaliang said the DENR had been taking a “neutral” stand on the illegal occupation of a forest reservation, telling the foundation that they would not intervene in what the department referred to as a “land dispute.”

The foundation signed a memorandum of agreement (MOA) with the DENR in 2017 under the late Environment Secretary Gina Lopez.

The MOA was intended to continue efforts to protect and conserve the 2,700-hectare land around Masungi Georeserve, which is largely in Baras, Rizal, but includes some parts of the Upper Marikina River Basin Protected Landscape, Dumaliang said.

According to Dumaliang, the DENR has the “contractual obligation” to evict the “illegal resorts, quarry companies and other illegal occupants” within the conservation project area.

She said seven Masungi park rangers, who were eating in a canteen, had been assaulted by around 30 people believed to be working for owners of allegedly illegal resorts in the area. Two rangers had to be hospitalized.

“This would not have happened if the DENR had just removed them [illegal occupants]. This somehow drove these people to become violent rioters,” Dumaliang said. “[The DENR] is very concerned in keeping a neutral position and weighing things on this issue.”

Dumaliang also said resort owners were flaunting what they claimed was an endorsement from the DENR that somehow solidified their occupancy of parts of the protected area, despite the department’s own cease-and-desist orders against their “continued harmful operation.”

“Emboldened by the questionable endorsements and advised that only Masungi [Foundation] stands in the way of their businesses, the resort owners embarked on a comprehensive disinformation, hate and violent campaign to stop the conservation project of Masungi and DENR in the area,” Dumaliang added.

“Anarchy and lawlessness rule the day,” Ben Dumaliang, Ann’s father and president of MGF, said in an earlier letter to Philippine National Police chief Dionardo Carlos obtained by the Inquirer. “There is a convenient—but mistaken—police excuse not to intervene claiming it is a land dispute issue.”

“Neither is Masungi [Foundation] engaged in land grabbing or in business as the illegal quarries and resorts falsely portray,” he wrote.

Ann Dumaliang also said that her community had been receiving threats allegedly from owners of resorts and illegal structures in the area.

Early last year, a cardboard box containing bullets was left outside the foundation’s office, a form of grave threat. Months later, two park rangers were wounded after they were shot at by men suspected to be working for the resorts.

“Violence is never okay here,” she said. “We need to hold these people accountable already.”