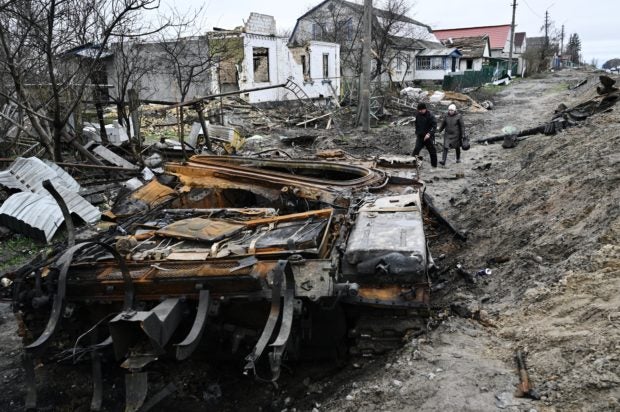 Local residents walk amid debris of a charred Russian tank next to destroyed houses in the village of Zalissya, northeast of Kyiv, on April 19, 2022, during the Russian invasion of Ukraine. AFP

Mariupol could fall in ‘hours’

A commander of forces holding out at a steelworks in the besieged port city of Mariupol issues a desperate plea for help, saying his marines are “maybe facing our last days, if not hours”.

“The enemy is outnumbering us 10 to one,” says Serhiy Volyna from the 36th Separate Marine Brigade.

Efforts to evacuate civilians from Mariupol have failed again because of Russian shelling, officials in Kyiv say.

“Unfortunately, the humanitarian corridor out of Mariupol today did not work as planned,” Deputy Prime Minister Iryna Vereshchuk says.

United Nations Secretary-General Antonio Guterres has asked to meet with the presidents of Russia and Ukraine in their respective capitals, a UN spokesman says.

With the organisation largely sidelined so far in the conflict, Guterres made the request in letters sent to Russian President Vladimir Putin and his Ukrainian counterpart Volodymyr Zelensky, says spokesman Stephane Dujarric.

The US Defense Department has retracted its claim Ukraine has been supplied with more aircraft, saying only parts had been delivered.

Pentagon spokesman John Kirby says while fixed-wing aircraft have been offered by an unidentified country to bolster Kyiv’s defences, “they have not received whole aircraft from another nation”.

Finance officials from the world’s richest countries are convening to address global challenges including a possible food crisis — but must overcome tensions over Russia’s invasion of Ukraine.

US Treasury Secretary Janet Yellen leads a multi-nation walk out of the meeting when Russian officials spoke, joined by British, French and Canadian officials.

German Chancellor Olaf Scholz is under pressure for refusing to send heavy weapons to Ukraine.

“We believe that the Bundeswehr (Germany army) would be capable of supplying us with the weapons we need right now,” Ukraine’s ambassador to Germany, Andriy Melnyk, tells broadcaster ZDF. “We do not know why this is not happening.”

General Markus Laubenthal argues Berlin is not in a position to send the weapons Ukraine wants as this would “considerably weaken (Germany’s own) defence capability”.

Over a million Ukrainians have in contrast returned to their country since the Russian invasion began, says a spokesman for Kyiv’s border force.

On a visit to Ukraine, EU chief Charles Michel says the union will do “everything possible” to help Ukraine win the war and that Kyiv’s application for membership of the bloc is a “priority”.

He also insists that war crimes allegedly committed by Russian forces be prosecuted.

Ukraine’s defence ministry says its troops have beaten back a Russian attack in the city of Izium, a gateway to the eastern Donbas region which is the target of a major Russian offensive.

Kyiv also claimed enemy losses in a Ukrainian counter-attack near the town of Marinka in the southern part of the Donbas, where pro-Russian separatists have been fighting government forces since 2014.

Finland’s parliament opens a debate on whether to seek Nato membership.

Russia has warned of a nuclear build-up in the Baltic should Finland and neighbouring Sweden, which is also considering joining NATO following the invasion, join the Western alliance.