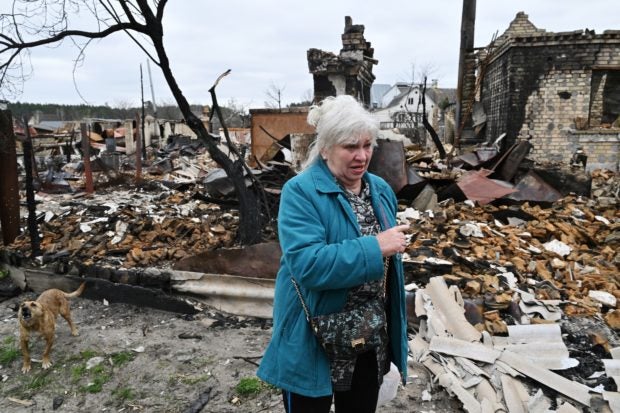 Nadiya, 62, reacts in front of her destroyed house in the village of Moshchun, northwest of Kyiv, on April 20, 2022, as more than five million Ukrainians have now fled their country following the Russian invasion, the United Nations says. AFP

MOSHCHUN, Ukraine—Locals trickling back to the pummelled Ukrainian village of Moshchun must effectively sign away their lives for permission to enter.

That’s because invading Russian troops are gone from the village northwest of Kyiv — but their missiles, mines and booby traps are not.

In order for residents to visit their burned, bombed and looted houses, they have to accept, in the form of a waiver, the risk of death or maiming by remnants of the invasion they had at least initially escaped.

“They say they did some de-mining. We found a booby trap in our garden. It seems it was disarmed, we don’t know,” said resident Olena Klymenko, whose home was destroyed. “Still, we need to look for our stuff.”

A portion of the millions of Ukrainians who fled abroad in the war’s earliest days have now come back home, especially to the area north of Kyiv that Russians retreated from after Ukraine’s fierce resistance.

Many returning residents have encountered devastating and seemingly indiscriminate destruction, including those from the pine forest-ringed village of Moshschun that was home for under 1,000 people before the war.

Nearly all of its homes are pocked or pierced by shrapnel and have shattered windows, but a minority were completely incinerated.

Rusting steel frames, cylinders and tangles of wire are the only evidence of the furniture, washing machines and beds there were before invading forces reached the area in the early days of the war, which began on February 24.

“They destroyed everything, everything we worked for years to build,” said 51-year-old shop owner and baker Vadym Zherdetskyi of the invasion.

Though damaged, his store is still standing, but he told AFP that Russian troops pried open its doors and carted away the alcohol.

He said the looters got little else because most of the food supplies inside had already gone to Ukrainian troops and locals.

In order to begin cleaning up the mess, he first had to personally check the property for traps or unexploded ordnance because official de-mining teams have not been able to clear all the village’s dozens of structures.

“I used a rope with a hook on it. You have to throw it and pull it along the ground. If nothing explodes, then you can move forward another five meters. Same with the door –- you use the hook to pull it open,” he added, noting he found no explosives.

He shrugged off the risk, especially after the terror of artillery or rocket strikes, gunfire and tanks during the invasion: “That’s life.”

The lingering threat of the explosives hurled at the village, and booby traps, is not an idle one.

Klymenko had an unexploded rocket in her yard, as well as a length of wire that was strung between her and the neighbour’s property.

To her it looked like a trap, so her family notified soldiers. She wasn’t sure what it turned out to be -– the family is now staying in Kyiv.

Soldiers guarding the village claimed the risk was especially elevated from traps allegedly set by retreating Russian troops, which employed enticing items to tempt people to pick them up and thus set off an explosion.

“They dig a hole under jewellery on the ground and put an explosive there. Same with the children’s toys, and the bodies of their own soldiers,” said a 39-year-old Ukrainian soldier who spoke on condition that he be named by his call-sign Shchavlik.

AFP could not confirm his account or whether any locals had been victims of traps or encounters with unexploded ordnance.

Some of the residents had fled with nothing more than the clothes they were wearing and their ID papers –- everything else was consumed by explosions and resulting fires.

They felt fortunate to have survived, yet were carrying the terror of everything they had seen, heard and felt during the onslaught against their home town.

Nadia Odientsova, 62, spent days under explosive strikes, taking refuge in the cellars of three different homes before it was over, because the first two burnt to the ground.

“When we arrived in Kyiv, they settled us in a hospital. When the air raid sirens would go off, people would get scared, but we were not afraid of it anymore,” she told AFP as she surveyed the ruins of her home.

“After all those (projectiles) flying over our heads -– and all the bombing and fire –- we were not scared of the sirens any more. It was much worse here,” she said.