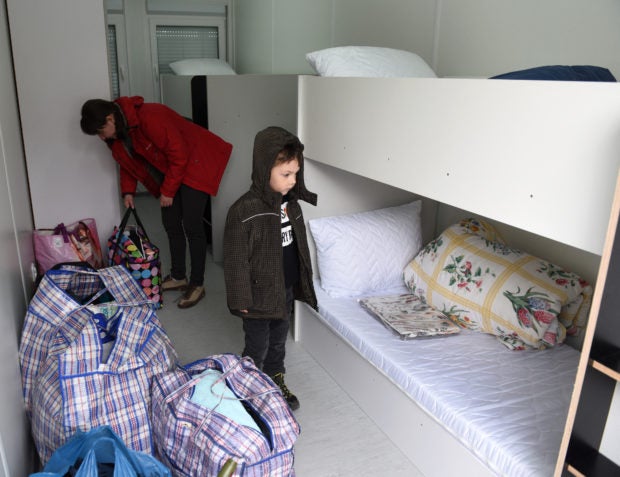 Ukrainian evacuees arrive at a village of prefabricated houses for people displaced by the war in the western Ukrainian city of Lviv on April 19, 2022, during the Russian invasion of Ukraine. AFP

LVIV—In a park in western Ukraine, Viktoria wheeled her four-month-old granddaughter in a pushchair between rows of prefabricated houses that have become home after escaping war.

The 39-year-old kindergarten administrator, her daughter and granddaughter arrived last month in the city of Lviv, escaping bombardment in the eastern region of Lugansk.

The previous day they moved into the temporary village set up off one of the park’s main walkways, after spending three weeks living in a school.

“The conditions were good there but there were 18 people sleeping on the floor in the room with us,” she said.

“Here we can be just by ourselves, we have real beds, and it’s warm,” she added, of their new home built with funding from neighboring Poland.

Russia’s invasion of Ukraine in late February has killed thousands and forced millions to flee their homes.

Some 200,000 internally displaced people have found shelter in Lviv, a city with a pre-war population of around 700,000 that has remained relatively safe compared to the rest of the country, despite deadly missile strikes on Monday.

Polish Prime Minister Mateusz Morawiecki made a flash visit to the new settlement for the displaced in Lviv on Tuesday, saying it could welcome up to 350 people.

“There will be more of these villages. In Lviv alone, they will accommodate 5,000 people,” he promised a gaggle of mostly Polish reporters and a few garden landscapers.

Plans were also afoot to build similar settlements in ravaged towns retaken from the Russians outside the capital Kyiv, he added.

After the premier left, 12-year-old Dmitry arrived with his mother, little brother and uncle, lugging a few carrier bags, to move in too.

“I like it here,” said the young boy from the eastern city of Kramatorsk standing in his new doorway, two bunk beds visible behind him.

His uncle Oleksandr, a factory worker, said the family had left everything behind when they fled in mid-March.

“We hope that the war ends soon, so we can go home and return to work,” he said.

In the courtyard, a family walked in from a nearby polytechnic building-turned-shelter, appearing to look for a private room of their own.

A short walk away, across from an open-air coffee shop, around 400 people still slept inside the polytechnic’s sports centre.

In one of its warmly heated rooms, beds covered in blankets stretched out across an indoor basketball court. Clean clothes hung up to dry on stall bars under a basketball hoop.

Olena, 75, said she had fled the city of Kharkiv near the Russian border, where her newly furnished flat had been destroyed.

The unmarried teacher trainer said she hoped the war would stop soon so she could return home.

A few days ago, she said, she and a new male friend from her home city took one of Lviv’s trolleybuses and went to mass together.

Outside in the park, a couple of large pigeons pecked at the pathway between the trees, while a red squirrel bounced along the undergrowth.

Volodymyr, a 53-year-old from Lviv, walked up the path carrying a plastic tricycle, followed by his grandson, two-year-old Lukyan.

“We come here every day. I like the squirrels, and he likes the pigeons,” he said, showing off two round walnuts in his coat pocket.

He said it was a small mercy that the park had remained the same despite the war.

“A few old trees have been cut down, but the squirrels are still here running around,” he said.