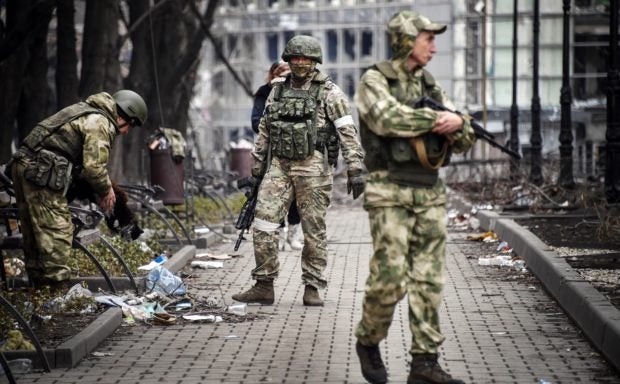 Russian soldiers walks along a street in Mariupol on April 12, 2022, as Russian troops intensify a campaign to take the strategic port city, part of an anticipated massive onslaught across eastern Ukraine, while Russia’s President makes a defiant case for the war on Russia’s neighbor. AFP

KYIV—A commander for the Ukrainian marines fighting in the last stronghold of Mariupol said his forces were “maybe facing our last days, if not hours” and appealed for extraction in a Facebook post published early Wednesday.

“The enemy is outnumbering us 10 to one,” Serhiy Volyna from the 36th Separate Marine Brigade said, sheltering at the besieged Azovstal factory, a vast plant with underground tunnels where Ukrainian defenders are pinned down by Russian fighters.

“We appeal and plead to all world leaders to help us,” Volyna said in the video. “We ask them to use the procedure of extraction and take us to the territory of a third-party state.”

It is not possible to verify information given by either side given the scale of the fighting and lack of communications in Mariupol.

Russian forces are believed to have gradually pushed their way into the city and some Ukrainian officials said Tuesday that a hospital near the Azovstal plant was hit.

Volyna said the Russians had the “advantage in the air, in artillery, in their forces on land, in equipment, and in tanks”.

“We are only defending one object — the Azovstal plant — where in addition to military personnel, there are also civilians who have fallen victim to this war,” he added.

Russia on Tuesday called on Ukrainian forces in Mariupol to “immediately” lay down their arms in a new ultimatum.

Its defence ministry said Ukrainian forces still holed up inside Azovstal were facing a “catastrophic situation”.