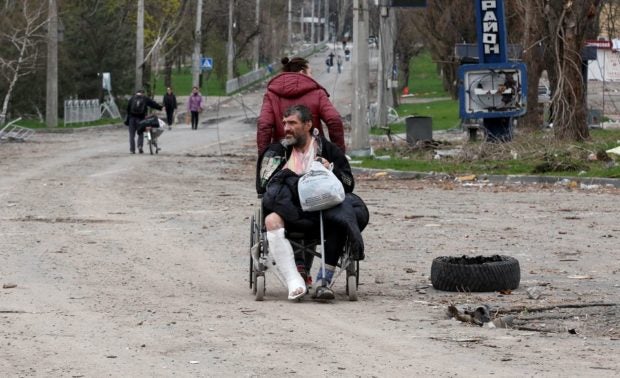 A woman pulls a wheel chair while transporting an injured man in a street in the course of Ukraine-Russia conflict in the southern port city of Mariupol, Ukraine April 18, 2022. REUTERS

LVIV/KYIV — Ukraine said Russia had started an anticipated new offensive in the east of the country, with explosions reported all along the front lines as well as attacks in other regions.

Ukrainian President Volodymyr Zelensky said Russia had begun the “Battle of Donbas” in the east on Monday and a “very large part of the entire Russian army is now focused on this offensive”.

“No matter how many Russian troops they send there, we will fight. We will defend ourselves,” he vowed in a video address.

Zelensky’s chief of staff, Andriy Yermak, called it “the second phase of the war” and assured Ukrainians their forces could hold off the offensive. “Believe in our army, it is very strong,” he said.

Ukrainian media reported a series of explosions, some powerful, along the front line in the Donetsk region, with shelling taking place in Marinka, Slavyansk and Kramatorsk. Ukrainian local officials and local media also said explosions were heard in Kharkiv in the northeast of Ukraine, Mykolaiv in the south and Zaporizhzhia in the southeast.

Reuters was not immediately able to verify the reports.

Driven back by Ukrainian resistance in the north, Moscow has refocused its ground offensive in the two eastern provinces known as the Donbas, while launching long-distance strikes at other targets including the capital, Kyiv.

Donbas has been the focal point of Russia’s campaign to destabilize Ukraine, starting in 2014 when the Kremlin used proxies to set up two separatist “people’s republics” in the ex-Soviet state. It is also home to much of Ukraine’s industrial wealth, including coal and steel.

Biden to host call with allies

Western capitals and Kyiv accuse Russian President Vladimir Putin of unprovoked aggression, and the White House said U.S. President Joe Biden would hold a call with allies on Tuesday to discuss the Ukraine crisis, including on how to coordinate on holding Russia accountable.

French President Emmanuel Macron said his dialogue with Putin had stalled after mass killings were discovered in Ukraine.

The United Nations said on Monday the war’s civilian death toll had surpassed 2,000, reaching 2,072 as of midnight on April 17 from the start of the Russian invasion on Feb. 24.

About 4 million Ukrainians have fled the country.

Russia denies targeting civilians in what it calls a special operation to demilitarise Ukraine and eradicate dangerous nationalists. It rejects what Kyiv says is evidence of atrocities, saying Ukraine has staged them to undermine peace talks.

Russia has been trying to take full control of the southeastern port city of Mariupol, which has been besieged for weeks and which would be a huge strategic prize, linking territory held by pro-Russian separatists in the east with the Crimea region that Moscow annexed in 2014.

“To be honest, we are not well,” one resident named Olga told Reuters. “I have mental problems after airstrikes, that’s for sure. I’m really scared. When I hear a plane I just run away.”

Major Serhiy Volyna, commander of Ukraine’s 36th marine brigade which is still fighting in Mariupol, appealed for help in a letter to Pope Francis.

“This is what hell looks like on earth … It’s time (for) help not just by prayers. Save our lives from satanic hands,” the letter said, according to excerpts tweeted by Ukraine’s Vatican ambassador.

Read Next
US will no longer enforce mask mandate on airplanes, trains after court ruling
EDITORS' PICK
Percy Lapid’s kin: ‘We demand that his cowardly assassins be brought to justice’
Nothing’s certain so here’s how everyday Filipinos can make the most out of their Plan B
Do all the things you do, faster
PNP vows to bring justice for slain Percy Lapid; says probe underway
House energy committee chair Arroyo bats for cheap electricity
‘Seniority’ requirement despite vacant posts in DOH bothers senators
MOST READ
Student stabs teacher dead in Samar town
Trixie Angeles quits as press secretary due to health reasons
Not rehired?: Trixie Angeles not on list of reappointed Cabinet execs
Heart Evangelista to stay abroad ‘indefinitely’: ‘Hindi muna ako babalik’
Don't miss out on the latest news and information.