‘This is my third war’: Ukraine’s elderly are conflict’s forgotten victims | Inquirer News 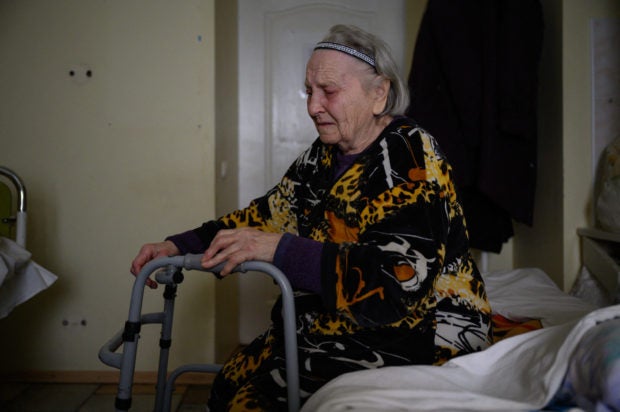 Zoia Taran, 85, from Sloviansk reacts as she recounts her story, as she sits on her bed at a shelter for internally displaced people, in Dnipro on April 16, 2022. AFP

DNIPRO, Ukraine—Shuffling down the corridor of a refugee centre in Ukraine with his grey tracksuit sleeve rolled to his shoulder, 71-year-old Vladimir Lignov reveals the remains of a severed limb he says he can still feel.

“It was on the 21st of March, I went out to smoke. Then a shell hit. I lost my arm,” he says, recalling the strike on his home in Avdiivka, an industrial hub in east Ukraine and a military priority for invading Russian forces.

Now in relative safety in the central Ukraine city of Dnipro the former train conductor is among what aid workers say is a particularly vulnerable segment of the population — the elderly.

In the Dnipro maternity hospital, hastily opened up to accommodate people fleeing Moscow’s forces, Lignov is struggling to come to terms with what happened and why — not to mention what might come next.

Medical staff at the Myrnorad hospital near ongoing fighting and where Lignov was treated after the strike say he should return for treatment in a week.

Staff in Dnipro, he says, told him he should return in three days.

“I don’t understand what’s going on. Maybe it’s better if I just go to the graveyard. I don’t want to go on living,” he says, as another elderly man hobbles past him in the corridor.

A van arrives from the east ferrying three elderly people groaning in pain as volunteers lower them gingerly into wheelchairs.

Other passengers are erratic. One man, dazed, reaches for his cigarettes as soon as he gets out of the van and grabs his belongings as if he is rushing to saftey.

“The hardest are the people who spent long stretches in cellars,” says Olga Volkova, the volunteer director of the center, that houses 84 residents, most of whom are elderly.

“A lot of people were left on their own. We helped them before the war, but then they were left to fend for themselves.”

The elderly are “often forgotten, very vulnerable” in times of war says Federico Dessi, the Ukraine director of the NGO Handicap International, a group that provides equipment and will financially help the Dnipro home.

“Cut off from their families” and “sometimes unable to use telephones or communicate” they are particularly vulnerable in conflicts, Dessi said.

Leaving aside physical health, the elderly often they require “additional help, which is often not available”.

Aleksandra Vasiltchenko, an 80-year-old ethnic Russian from Ukraine is luckier than most of the other new arrivals.

For one, she is sure on her feet, despite other ailments, and her grandson comes to pick her up as soon as she arrives at the Dnipro home.

She was relieved to have escaped after spending weeks alone in her three-room apartment in the eastern Ukraine city of Kramatorsk, where Russian strikes recently killed nearly 60 people trying to flee by rail.

“I was hiding all the time in the bathroom. I was constantly crying. I was imprisoned in my own flat,” she tells AFP, saying she wished death on Russian President Vladimir Putin and his children.

Perched on a bedside, her hands gripping a walking aid, Zoya Taran considers herself among the lucky ones — that’s despite having only one working kidney, precarious balance, diabetes and poor eyesight.

That because her rock musician son quit a career in “show business” two decades ago to care for her.

“I am that elderly babushka,” she says smiling. “My son is my eyes, my hands and my legs. I have nothing on my own.”

‘What do they want from us?’

So as Russian strikes edged closer to Sloviansk, Taran, who had initially hesitated to leave, finally decided it was time in order to “save my son”.

“Why do we need this war? What do they want from us?” she says, sobbing.

Citing Ukrainian government figures, Handicap International estimates that 13,000 elderly Ukrainians or people with disabilities have arrived in the wider Dnipro region since Russia launched its invasion in late February.

Another hub, mainly for evacuees from the besieged and destroyed port city of Mariupol, and their children, has also offered shelter to elderly residents from the east.

“Even if you open 10 places like this, they will all be full, says Konstantin Gorshkov, who runs the centre with his wife Natalia.

Among the 30 new arrivals joining the roughtly 100 existing residents is 83-year-old Yulia Panfiorova from Lysychansk the eastern in the Lugansk region under attack by Russian forces.

The former economics professor — now hard of hearing — was “very scared” by the sound of shooting in her town and the three shells that stuck close enough to her home to blow out her windows.

“This is my third war,” she said, referring first to World War II, then the outbreak of fighting in 2014 between the Ukrainian army and pro-Kremlin separatists.

“Lysychansk was freed from the Nazis in 1943. I remember how we returned home. Of course I have some memories about it.

“They were Nazis. Then our country was invaded, and now our country has been invaded by a foreign state. “Then the freedom of our state was at threat. Now it is the same.

“We should fight… But the war is so scary.”