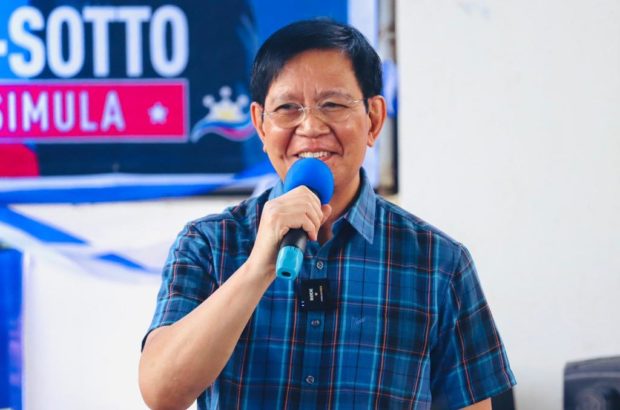 SURIGAO City – Manila Mayor Francisco “Isko Moreno” Domagoso went off script when he called for the withdrawal of Vice President Leni Robredo from the presidential race, taking even Sen. Panfilo Lacson by surprise.

“I didn’t know and I had no idea he would do that”, Lacson told the Inquirer on Sunday night, hours after the Easter Sunday press conference jointly held by the two men, along with a third presidential candidate, former defense chief Norberto Gonzales.

Domagoso’s chief strategist Lito Banayo also confirmed to the Inquirer that the mayor’s appeal to Robredo to drop out of the race “was not a team call but an off-the-cuff comment.”

But while Lacson didn’t join Domagoso’s call, he said he didn’t feel malice in the Manila mayor’s impromptu comments, which changed the tone of Sunday’s event from a united stand to outright hostility against the vice president, currently ranked second in pre-election surveys behind front-runner Ferdinand Marcos Jr.

“In fairness to Mayor Isko, he made it clear that the ‘withdraw call’ was only his own,” Lacson said in Viber messages.

“I don’t think I was blindsided, or at least it was intentional on the part of Mayor Isko. I think he was carried away by his recollection that VP Robredo earlier asked him to do the ‘supreme sacrifice’ and withdraw,” he added.

The Aksyon Demokratiko standard-bearer had argued that Robredo’s withdrawal would raise the odds of less polarizing candidates winning against Marcos, since the latter’s voting base could be driven by anti-Robredo sentiment.

Banayo said Domagoso had made the remark in response to Gonzales’ argument that Marcos Jr.’s huge lead over Robredo in the latest polls was “more an expression of dislike for VP Leni by the electorate.”

“And since the Leni partisans, including Tim Orbos and his companions called for a ‘supreme sacrifice’ so that [Marcos] Jr. can be defeated, Mayor Isko challenged VP Leni to do that sacrifice and withdraw from the race,” he said, referring to a former leader of the Domagoso volunteer group Ikaw Muna Pilipinas, who had since switched to Robredo.

But Banayo said Domagoso hadn’t merely been caught by the heat of the moment when he made the call.

“No, it was not emotional. As I have been repeatedly saying, the VP has a ceiling beyond which her numbers will not grow, which is basically in sync with what Secretary Gonzales opined. If her intent is to ensure a Marcos defeat, best for her to give way to those who might have a chance to breach her ceiling,” he said.

“Just look at the second choice options and analyze the same, as Secretary Gonzales did,” Banayo said, noting that Domagoso was the top second choice among voters.

Banayo claimed in February that Robredo’s support had a “cap” of only 14-15 percent, but in Pulse Asia’s latest survey in March, the vice president got a 24-percent voter preference to Domagoso’s 8 percent.

Lacson explained how he, Domagoso and Gonzales came to an agreement to hold the press conference.

“It was in that Manila Hotel meeting after a media forum that [Senate President Vicente] Sotto and I attended that he broached the idea of holding a joint prescon. He said he, [Sen. Manny] Pacquiao and former [presidential spokesperson Ernesto] Abella had already agreed and were inviting me and Mayor Isko to join,” Lacson recalled.

“I don’t know who made arrangements with Manila [Peninsula]. My only request was a neutral place to hold the prescon,” he said.

Pacquiao, who sent an advance party, and Abella did not appear at the press conference.