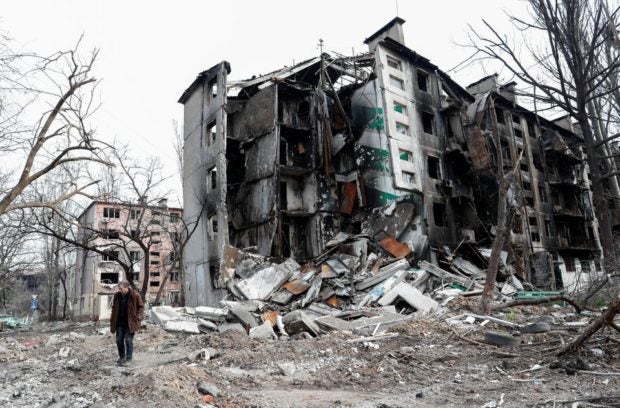 A man walks near a residential building destroyed during Ukraine-Russia conflict in the southern port city of Mariupol, Ukraine April 17, 2022. REUTERS

Ukraine’s president Volodymyr Zelensky says Russia is seeking to destroy the eastern region of Donbas and promises to defend it, starting with the besieged port city of Mariupol.

“Russian troops are preparing for an offensive operation in the east of our country in the near future. They want to literally finish off and destroy Donbas,” Zelensky says in an evening statement.

Mariupol will ‘fight to the end’

Ukraine’s prime minister Denys Shmyhal tells ABC’s “This Week” that Mariupol “has not fallen” — adding the encircled forces defending the city from Russian attack will “fight to the end”.

Ukraine says it is pausing the evacuation of civilians from the east of the country for a day because of a failure to agree terms with Russian forces.

“As of this morning, April 17, we have not been able to agree with the occupiers on a ceasefire on the evacuation routes. That is why, unfortunately, we are not opening humanitarian corridors today,” Ukrainian Deputy Prime Minister Iryna Vereshchuk states.

Russia’s defense ministry says it has struck a military plant outside Kyiv, as Moscow intensifies its attacks on the Ukrainian capital.

“During the night, high-precision, air-launched missiles destroyed an ammunitions factory near the settlement of Brovary, Kyiv region,” the ministry says in a statement on Telegram.

Macron invited to see evidence of ‘genocide’ in Ukraine

Zelensky says he has invited his French counterpart to visit Ukraine to see for himself evidence that Russian forces have committed “genocide” — a term President Emmanuel Macron has avoided.

“I talked to him yesterday,” Zelensky tells CNN.

“I just told him I want him to understand that this is not war, but nothing other than genocide. I invited him to come when he will have the opportunity. He’ll come and see, and I’m sure he will understand.”

A series of strikes in Ukraine’s second-largest city of Kharkiv in the northeast of the country has left at least five dead and 13 injured, a regional health official tells AFP.

Pope Francis calls for peace in Ukraine during this “Easter of war” as he delivers the traditional Easter Sunday Urbi et Orbi address on St Peter’s Square at the Vatican.

“May there be peace for war-torn Ukraine, so sorely tried by the violence and destruction of the cruel and senseless war into which it was dragged,” the pontiff says.

Italian Prime Minister Mario Draghi complains in a newspaper interview that Western diplomatic efforts to persuade Vladimir Putin to halt the war in Ukraine have so far led nowhere.

“I am beginning to think that those people are right when they say ‘It is useless to talk to him, it’s just a waste of time’,” Draghi tells the daily Il Corriere della Sera, adding Putin’s goal appears to be “to annihilate the Ukrainian resistance, occupy the country and entrust it to a friendly government”.

The Kremlin also steps up a crackdown on dissent at home, adding nine prominent Kremlin critics and journalists to its growing list of “foreign agents”.

No homes to return to–UN

Many of the nearly five million people who have fled Ukraine will not have homes to return to, the United Nations warns.

UNHCR, the UN refugee agency, says 4,836,445 Ukrainians have left the country since the Russian invasion on February 24.