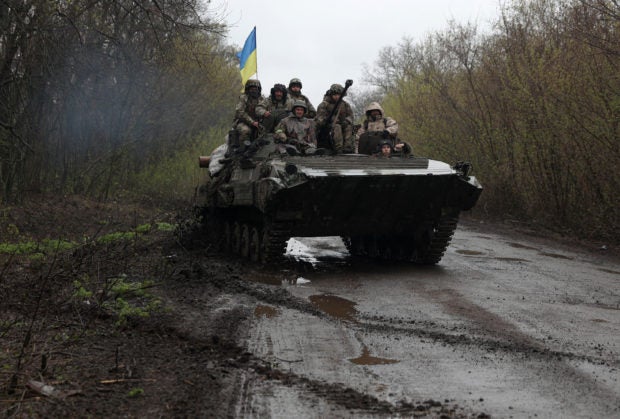 Ukrainian soldiers stand on an armored personnel carrier (APC), not far from the front-line with Russian troops, in Izyum district, Kharkiv region on April 18, 2022, during the Russian invasion of Ukraine. AFP

The ministry said that “high-precision air-based missiles” had hit 13 Ukrainian positions in parts of the Donbas, including the key town of Slovyansk, and that other air strikes “hit 60 military assets of Ukraine”, including in towns close to the eastern frontline.

It said Russian troops destroyed two warehouses containing warheads of Tochka-U tactical missiles in Chervona Polyana, in the region of Lugansk, and in Balakliia in the Kharkiv region.

A total of 1,260 military targets were hit by rockets and artillery overnight, the ministry said in a statement.

“Russian air defense systems shot down a Ukrainian MiG-29 fighter near the village of Malynivka in the Donetsk region,” the statement added.

Late Monday, authorities in Kyiv said that Russia had launched a major offensive in eastern Ukraine, opening a new phase of its nearly two-month military campaign.