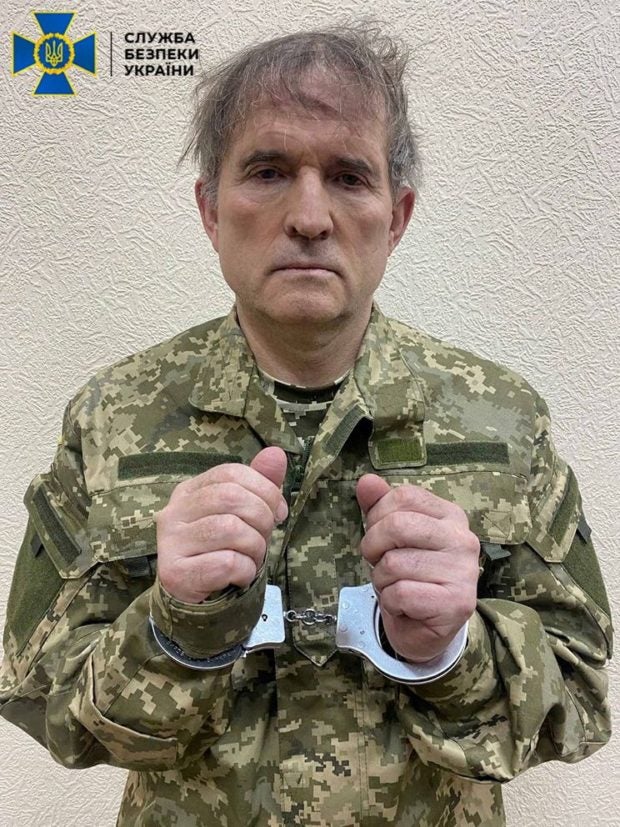 Pro-Russian Ukrainian politician Viktor Medvedchuk is seen in handcuffs while being detained by security forces in unknown location in Ukraine, in this handout picture released April 12, 2022. Press service of State Security Service of Ukraine/Handout via REUTERS

LONDON — Britain is not going to be looking at how to help Russia, a senior minister said on Tuesday when asked about the prospect of swapping pro-Russian politician Viktor Medvedchuk for two British fighters who were captured in Ukraine by Russian forces.

The Britons appeared on Russian state TV on Monday and asked to be exchanged for Medvedchuk, a Ukrainian ally of Russian President Vladimir Putin who is being held by the Ukrainian authorities. read more

Asked on Sky News whether a possible swap was something the government would get involved with, Britain’s Northern Ireland minister Brandon Lewis said: “We’re actually going through the process of sanctioning people who are close to Putin regime, we’re not going to be looking at how we can help Russia.”

Lewis said he did not want to comment on the specific situation of the two men, Shaun Pinner and Aiden Aslin.

“We always have responsibility for British citizens, which we take seriously. We’ve got to get the balance right in Ukraine and that’s why I say to anybody: do not travel illegally to Ukraine,” Lewis said.

The UK’s Foreign Enlistment Act blocks citizens from joining foreign militaries fighting countries at peace with Britain, and the government’s foreign secretary and defence minister have warned against Britons fighting in Ukraine after the war began in late February. L2N2VA2BG

Moscow’s invasion, which Russia has called a “special operation”, is in its second phase according to Ukrainian officials after Russian forces launched their anticipated offensive in eastern Ukraine.

“The armed forces in Ukraine have the support of the UK,” Lewis said. “We continue to put that support in and that’s the right way to do it.”