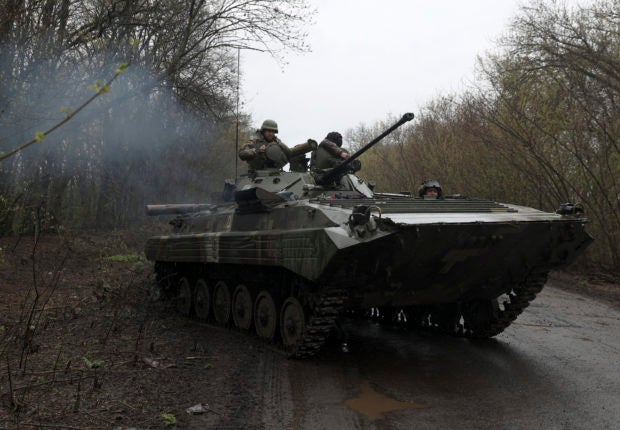 Ukrainian soldiers stand on an armoured personnel carrier (APC), not far from the front-line with Russian troops, in Izyum district, Kharkiv region on April 18, 2022, during the Russian invasion of Ukraine. AFP

“We can now confirm that Russian troops have begun the battle for the Donbas, which they have been preparing for a long time. A large part of the Russian army is now dedicated to this offensive,” he said on Telegram.

Russia’s army says it has destroyed a large depot of foreign weapons recently delivered to Ukraine near the western city of Lviv — one of 16 Ukrainian military sites it claims to have destroyed on Monday.

Russian planes in the morning struck a logistics centre holding “large batches of foreign weaponry, delivered to Ukraine over the past six days by the United States and European countries”, and “destroyed” them, says Russian defense ministry spokesman Igor Konashenkov.

Four died as they tried to escape the city of Kreminna which Russian forces captured earlier on Monday, Lugansk regional governor Sergiy Gaiday says on Telegram.

7 killed in Lviv, 3 in Kharkiv

The European Union condemns “indiscriminate and illegal shelling of civilians” by Russian forces, in a statement by EU foreign policy chief Josep Borrell.

“Attacks on Lviv and other cities in western Ukraine show that no part of the country is spared from the Kremlin’s senseless onslaught,” he said.

Russian President Vladimir Putin bestows an honorary title on a brigade accused by Ukraine of “war crimes” and mass killings in the town of Bucha.

A decree signed by Putin gives the 64th Motor Rifle Brigade the title of “Guards” for defending the “Motherland and state interests” and praises the “mass heroism and valour, tenacity and courage” of its members.

Ukraine’s security services then put out a video of Medvedchuk asking to be exchanged for Ukrainian civilians and soldiers trapped in the strategic besieged Ukrainian port of Mariupol.

Ukraine says it is halting civilian evacuations from the frontline towns and cities in the east of the country for a second day.

More than 4.9 million Ukrainians have fled their country following the Russian invasion, says the UN’s refugee agency, the UNHCR.

Some 200,000 employees of foreign companies in Moscow could lose their jobs due to sanctions over Russia’s military campaign in Ukraine, the city’s mayor says.