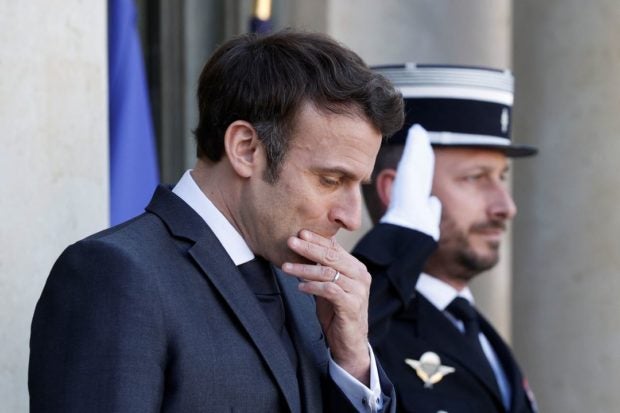 PARIS — French President Emmanuel Macron said on Monday that his dialogue with Russian President Vladimir Putin has stalled after mass killings were discovered in Ukraine.

“Since the massacres we have discovered in Bucha and in other towns, the war has taken a different turn, so I did not speak to him again directly since, but I don’t rule out doing so in the future”, Macron told France 5 television.

Russia has called the accusations its forces executed civilians in Bucha while occupying the town a “monstrous forgery” aimed at denigrating the Russian army.

Asked why he had not followed the example of other European leaders and travelled to the Ukrainian capital, Kyiv, Macron said that a show of support by itself was not needed after Russia’s Feb. 24 invasion of Ukraine.

“I will go back to Kyiv, but I will go there to bring something useful with me… because it’s obvious that I don’t need to travel there to show this support,” Macron said, adding that he had spoken around 40 times since the start of the war to Ukrainian President Volodymyr Zelenskiy.

“If I go to Kyiv, it will be to make a difference,” he said.

The Kremlin says it launched a “special military operation” to demilitarize and “liberate” Ukraine from nationalist extremists. Ukraine and the West say Putin launched an unprovoked war of aggression.