Biden says he does not know if he will visit Ukraine 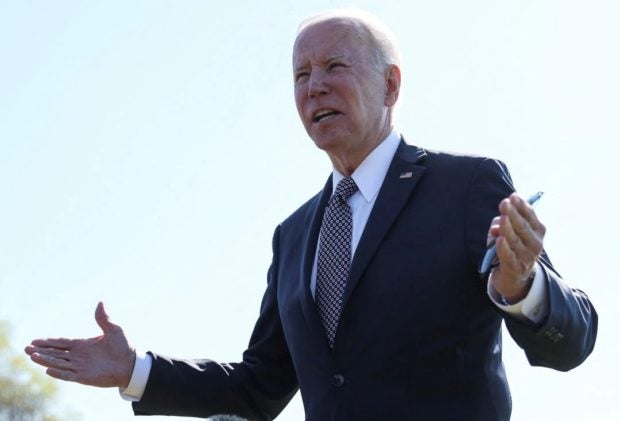 U.S. President Joe Biden calls Russia’s President Vladimir Putin a war criminal and said he would call for a war crimes trial, as he speaks to reporters upon arriving at Fort McNair on his way back to the White House in Washington, U.S., April 4, 2022. REUTERS

PORTSMOUTH, United States — U.S. President Joe Biden said on Tuesday that he does not know if he will travel to Kyiv after Ukraine’s wartime leader called on him to visit.

“The answer is, I don’t know,” Biden said when asked by reporters at an event in New Hampshire whether he would visit the Ukrainian capital.

Ukraine President Volodomyr Zelensky said in a CNN interview aired on Sunday that he wanted Biden to visit and expected that he would.

The White House has said Biden is not likely to go but that they are considering whether to send a high-ranking U.S. official to meet and show solidarity with Zelenskiy as he faces an intensifying Russian attack in the east of the country.

Sources familiar with the situation have floated Defense Secretary Lloyd Austin or Secretary of State Antony Blinken as possible U.S. officials to make the trip but that Biden and Vice President Kamala Harris were unlikely due to security concerns.

“If and when that happens, we’ll want to make sure its done in a very secure way,” Biden national security adviser Jake Sullivan said in an interview last week at the Economic Club of Washington D.C.