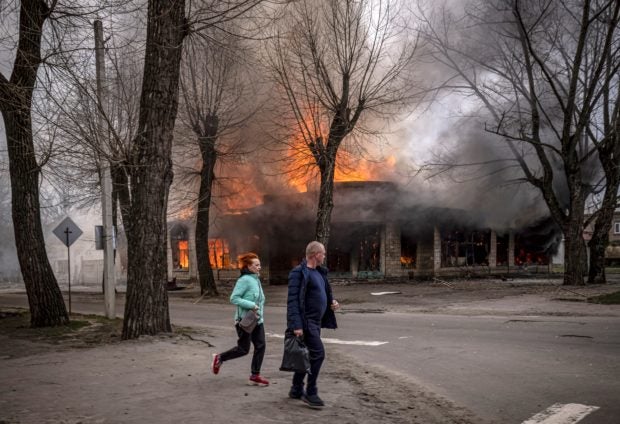 Residents run near a burning house following a shelling Severodonetsk, Donbas region, on April 6, 2022, as Ukraine tells residents in the country’s east to evacuate “now” or “risk death” ahead of a feared Russian onslaught on the Donbas region, which Moscow has declared its top prize. -AFP

Russia says its forces have carried out dozens of air strikes in eastern Ukraine as part of a new offensive in the Donbas region that had been expected for days.

Moscow says the strikes targeted Ukrainian positions in parts of the Donbas as well as in towns close to the eastern frontline.

“We are gradually implementing our plan to liberate the Donetsk and Lugansk People’s Republics,” Defence Minister Sergei Shoigu says, referring to eastern Ukraine’s two rebel regions, which Moscow has recognised as independent states.

Fighting between Ukrainian and Russian forces is “ongoing” in the strategic port of Mariupol, Pavlo Kyrylenko, governor of Ukraine’s eastern Donetsk region, says.

Russia earlier on Tuesday called on Ukrainian forces in Mariupol to “immediately” lay down their arms in a new ultimatum.

Russian forces are believed to have gradually pushed their way into the city, pinning Ukrainian troops down to giant factories near the port, which are equipped with vast underground tunnels.

US President Joe Biden holds a virtual meeting of allies to discuss the Ukraine conflict.

The videoconference brings together the leaders of France, Britain, Germany, Romania, Poland, Italy, Canada and Japan.

The United States and the European Union have reached a “broad consensus” on the need to increase pressure on Russia through new sanctions, the Italian government says after the talks.

“Hundreds of thousands of lives hang in the balance,” the United Nations chief says, adding a truce would allow safe passage for civilians to flee the eastern war zone, and for humanitarian aid to be delivered to the hardest-hit areas.

The first shipments of a new US military aid package have arrived at Ukraine’s borders to be handed over, a senior Pentagon official says.

The “seismic” impact of the war in Ukraine is spreading worldwide, causing the IMF to sharply downgrade its 2022 global growth forecast to 3.6 percent, 0.8 points lower than in January.

The latest World Economic Outlook shows Ukraine suffering a 35 percent collapse this year, while Russia sees a drop of 8.5 percent.

Russia says it is expelling 36 diplomats from Belgium and the Netherlands in retaliation for similar measures taken against its envoys in the two EU countries.