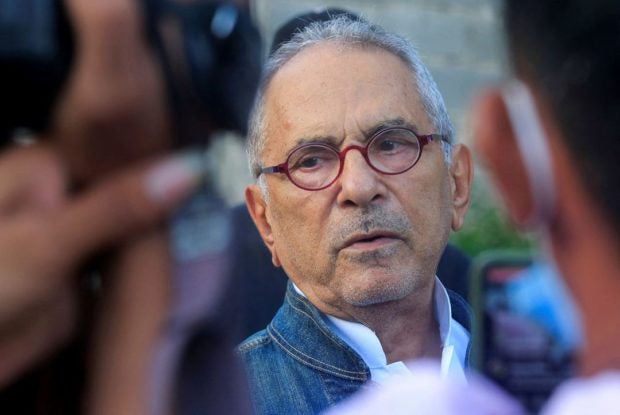 East Timor presidential candidate Jose Ramos Horta looks on as he talks to journalists after casting his ballot during the second round of East Timor’s presidential election in Dili, East Timor, April 19, 2022. REUTERS

DILI — Independence leader and Nobel laureate Jose Ramos-Horta has taken a decisive lead in the second and final round of East Timor’s presidential election, early results of the vote showed on Wednesday.

Timorese voters headed to the polls in the half-island nation of 1.3 million on Tuesday, choosing between Ramos-Horta and ex-guerrilla fighter President Francisco “Lu Olo” Guterres.

With almost half of votes counted, Ramos-Horta had a commanding lead of 59% while Lu Olo had 41%, according to data from the country’s election administration body (STAE).

Ramos-Horta, 72, is one of East Timor’s best known political figures and previously served as prime minister then as the country’s second president from 2007 to 2012.

He was a co-recipient of the Nobel Prize in 1996 for his efforts to bring a peaceful resolution to the conflict in East Timor when the country was brutally occupied by Indonesia.

In the first round of the election in April he narrowly missed securing an outright majority. An Australian academic calculated that he needed just 30,000 additional votes to secure victory in Tuesday’s second round.

Speaking after voting near his home in the capital of Dili, Ramos-Horta said he was “very confident” he would win but would honour the final results.

After years of political tensions between major parties, this election has been widely viewed as crucial to the nation’s stability. Ramos-Horta has suggested he may use presidential powers to dissolve parliament and call for early elections, currently scheduled for next year.

East Timor’s first president, Xanana Gusmao, is backing Ramos-Horta in this election and has described the current government as “constitutionally illegitimate.” Lu Olo, the incumbent, refused to swear in several ministers from Gusmao’s political party on the grounds they were facing ongoing legal investigations, including for alleged corruption.

The next president will be sworn in on May 20, the 20th anniversary of East Timor’s restoration of independence.