In northern Mexico, authorities search for missing women amid spate of disappearances 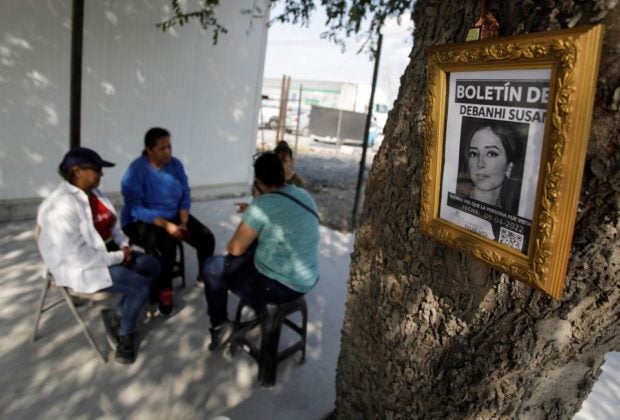 A flyer with information of Debanhi Escobar, an 18-year-old law student who has been missing since April 9, is pictured during a search held by her loved ones and security forces, in Escobedo, Mexico April 18, 2022. REUTERS

MONTERREY, Mexico — More than two dozen women and girls have disappeared so far this year in the northern Mexican state of Nuevo Leon, sparking frantic searches among residents who hope their loved ones have not become the latest victims of endemic gender violence.

On Tuesday, Nuevo Leon Governor Samuel Garcia said that 26 women and girls have disappeared since the beginning of the year and five more have been found dead after being reported missing.

During the news conference in the state capital Monterrey, considered Mexico’s most important industrial city, Garcia said he would increase funding and resources to combat gender violence.

Among the disappeared is Debanhi Escobar, an 18-year-old law student who has been missing since April 9. The last photo of her alive, which has since gone viral, shows her standing on the side of a highway on the outskirts of Monterrey not far from the Federal Attorney General’s office.

Her disappearance, which came two days after the body of another kidnapped woman, Maria Fernanda Contreras Ruiz, was found in Monterrey, has sparked protests and national attention to the crisis of gender violence and missing people across Mexico.

Mexico has reported 155 femicides – the murder of women because of their gender – in the first two months of this year, according to federal crime statistics. Nearly 25,000 more women are missing nationally.

The disappearances and femicides are part of a broader crisis of violence in Mexico, where annual homicides top 30,000. Since 2006, when the Mexican government declared a war on drug cartels sparking a surge in violence, more than 85,000 people have also disappeared.

Around 10 women are killed each day in Mexico, according to official data, where gender violence regularly sparks protests. Shortly before her disappearance, Debanhi Escobar was among thousands of women who attended a series of nationwide demonstrations against gender violence for International Women’s Day on March 8.

“She went to the feminist marches because she always wanted to help people,” Debanhi’s father, Mario Escobar, told Reuters. “We hope this will be a watershed moment, so no more girls, no more women go missing.”

On Monday, Debanhi’s parents, flanked by heavily armed police officers and search dogs, scoured the grounds of a trucking company near the spot where their daughter was last seen.

Nearby, about a dozen women distributed fliers to passing drivers offering a reward for information about Debanhi’s whereabouts.

Maria Rodriguez said she had been volunteering in search efforts every day, enduring sweltering heat and skipping out on recent Easter festivities, because the missing teenager reminded her of the risks to her own 20-year-old daughter, Arlen.

“She could be my daughter,” she said.