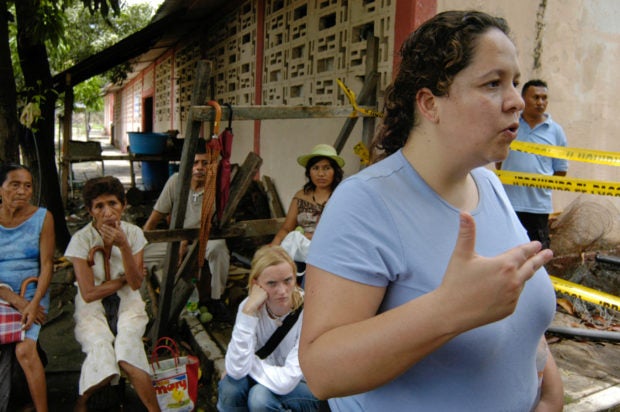 Maria Sirvent, legal representative of the association “Relatives of Arrested and Disappeared Persons and Victims of Human Rights Violations in Mexico” (AFADEM in Spanish) explains to relatives of people who went missing in the ‘dirty war’ of the 60’s and 70’s about the progress of the excavation works at an old military headquarter in the state of Guerrero, where the bodies of their loved ones are presumably buried, on July 7, 2008. AFP FILE PHOTO

MEXICO CITY — Decades after his sister disappeared during the political repression of Mexico’s “Dirty War,” Roberto Martinez hopes to finally meet the child he believes she gave birth to while held captive.

The creation of a government commission to search for at least 14 children thought to have been born to alleged victims of forced disappearance has given relatives newfound optimism.

Martinez’s sister Lourdes was detained at the age of 23 in Culiacan in northwest Mexico in 1974, during a dark chapter in Mexican history.

She was a member of the September 23 Communist League, a guerrilla group that fought the Institutional Revolutionary Party (PRI), which ruled the country as a one-party state for seven decades.

“I hope my nephew or niece was born and is out there,” Martinez told AFP by telephone from Culiacan.

It is the first time that the Mexican government has searched for people thought to have been given up for adoption after the forced disappearance of their mothers.

A specialized search unit was formed in mid-2019, but its work is just beginning.

Around 500 political dissidents and students were subjected to forced disappearance from the 1960s to the 1980s, according to the National Human Rights Commission.

“I hope with all my soul that the authorities help me to find my nephew or niece and their mother,” Martinez said.

“I’d like to tell everyone who was possibly born in the same circumstances how much their mothers gave for this country,” he added.

‘One of cruelest things’

The commission will review official files and testimonies of survivors in an attempt to locate the missing.

Forcing women to undergo “clandestine births, possibly to take away the children, must be one of the cruelest things that one human can do to another,” said the search unit’s head, Javier Yankelevich.

He urged anyone with doubts about their origins to “explore the possibility that the story they were told is not theirs and approach the institutions to go through the process to discover their identity.”

According to Camilo Vicente, who wrote a book on forced disappearances, there are indications that irregular adoptions did happen in Mexico, though not as many as in some other countries like Argentina and Chile.

“Even if there are one or two cases, it’s the state’s obligation to look for them,” Vicente said.

The authorities must reveal “how many children have died in military operations or suffered torture, another of the hidden stories of that long-denied counterinsurgency in Mexico,” he said.

Roberto Antonio Gallangos and his wife Carmen Vargas, also members of the Communist League, were detained in separate operations in 1975 and then disappeared.

Their four-year-old son Lucio Antonio and two-year-old daughter Aleida were separated and looked after by friends of the couple.

The boy was abducted by agents during another operation in which he was injured.

Aleida was given to a family by the man who was taking care of her and who died without revealing her history.

Lucio Antonio was sent to an orphanage. He was later adopted and baptized Juan Carlos Hernandez.

With support from her adoptive father, Aleida discovered her true identity in 2001.

A few years later, after overcoming obstacles thrown up by authorities who refused to open official files, she managed to locate her brother in Washington, where they both now live.

“People said that I seemed to be losing my mind,” Aleida said.

The siblings hope that the Inter-American Court of Human Rights will compel Mexico to locate their parents, incorporate the Dirty War into the official history books and compensate them.