More than 20,000 missing in Mexico in past 6 years | Inquirer News
Close
menu
search 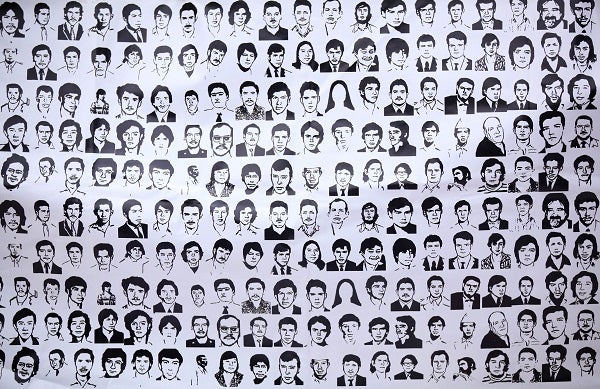 In this May 10, 2012, file photo, a banner shows ink drawings of missing people at the National March for Dignity on the day Mexicans celebrate el Dia de La Madre, or Mother’s Day, in Mexico City. Propuesta Civica, or Civic Proposal, a civic organization released on its website on Thursday, Dec. 20, 2012, a database, allegedly collected by the federal Attorney General’s Office, it says contains official information on more than 20,000 people who have disappeared in Mexico over the past six years. (AP Photo/Alexandre Meneghini, file)

MEXICO CITY — A civic organization released a database on Thursday that it says contains official information on more than 20,000 people who disappeared in Mexico over the past six years, a period that also saw thousands of people killed after the government launched a crackdown against drug cartels.

Propuesta Civica, or Civic Proposal, said the database it posted on its website contains details on 20,851 missing people that it says were collected by the federal Attorney General’s Office during the just-ended administration of President Felipe Calderon.

The missing include police officers, bricklayers, housewives, lawyers, students, businessmen and more than 1,200 children under age 11. They are listed one by one with such details as name, age, gender and the date and place where the person disappeared.

The database also includes chilling details of kidnappings, including the case of a man who was taken by a group of gunmen who stormed into his workplace in the city of Gomez Palacio, in the northern state of Durango, and took him away while his co-workers watched.

Another report details the disappearance of three businessmen in the western state of Michoacan, a place dominated by the Knights Templar drug cartel, a quasi-religious organization that controls most of the state. The report says the men were kidnapped in the town of Patzcuaro by gunmen traveling in two pickup trucks.

A spokesman for federal prosecutors, who would not allow his name to be used under the agency’s rules, said the Attorney General’s Office had no knowledge of the document.

Civic Proposal executive director Pilar Talavera said the database doesn’t contain enough information to determine how many of the disappearances are linked to the drug war.

She also said the report has inconsistencies that raise questions about whether all the missing are included.

For instance, the northern state of Baja California, where the border city of Tijuana is located, has only 15 people reported as missing even though it had hundreds of people killed as warring drug gangs fought for control. Baja California is also the state where soldiers in 2009 detained a man who confessed to disposing of at least 300 bodies over a decade by dissolving them in vats of lye.

Mexico City, with 7,137 people on the list, has the largest number of missing in the country, but the capital is one of the cities least affected by drug-related violence.

Despite the inconsistencies, the organization decided to publish the database to pressure the government to release official information on the missing, Talavera said.

“This database is one of the few sources of information that civil society has had access to (and that can help) to start to comprehend the true magnitude of violence in Mexico in the last six years,” she said.

Numbers vary on just how many people have disappeared in recent years. Mexico’s National Human Rights Commission says that 24,000 people were reported missing between 2000 and mid-2012. It says nearly 16,000 bodies found over the years remain unidentified.

The database, which Civic Proposal said it got from a Los Angeles Times reporter, was released three weeks after the Washington Post published a story saying it had received a list of missing people created by the Mexican Attorney General’s Office that recorded more than 25,000 disappearances.

In a letter to new President Enrique Pena, Human Rights Watch’s director for the Americas, Jose Miguel Vivanco, said that if the numbers quoted by the Post were correct, they would “place the wave of disappearances in Mexico that took place during President Felipe Calderon’s six-year administration as the worst in the history of Latin America.”

In Chile, about 1,200 people disappeared during the 1973-1990 dictatorship of Gen. Augusto Pinochet. In Colombia, non-governmental organizations and authorities say at least 50,000 people have gone missing during more than 40 years of internal violence.

Between 2006 and 2012, Calderon waged a campaign against organized crime that included the unprecedented deployment of thousands of soldiers. It is estimated by some that there were at least 70,000 deaths tied to organized crime violence during his six-year term, which ended Nov. 30.