newsinfo / Headlines
Headlines
Saved from ‘a lot of flak’ 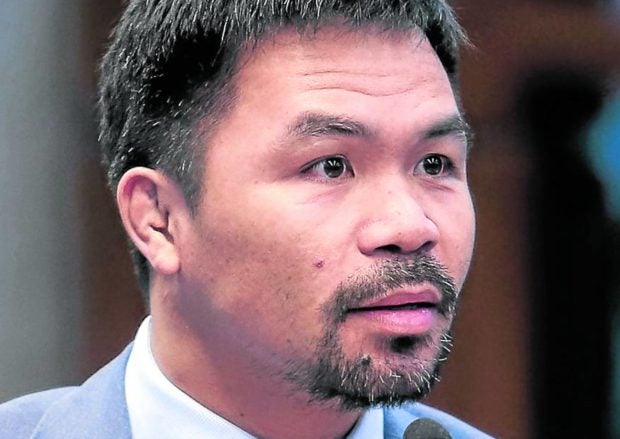 MANILA, Philippines — But for “divine intervention,” Sen. Manny Pacquiao would now still be drawing flak like three other presidential candidates.

Pacquiao had “every intention” to attend the Easter Sunday press conference of Sen. Panfilo Lacson, Manila Mayor Francisco “Isko Moreno” Domagoso, and former defense secretary Norberto Gonzales at the Peninsula Manila but could not make it on time, per his campaign manager Salvador Zamora.

“He promised,” Zamora said in an interview with ANC’s “Headstart” on Tuesday, referring to “a talk” between Pacquiao and Lacson that led to a decision made by the retired boxing champ in General Santos City to attend the press conference.

“Actually, we were not privy to the invitation. We were on vacation at that time,” Zamora said.

Pacquiao flew back to Manila but was late for the event that began before noon and ended by early afternoon.

“Yes, I was relieved. … We call it divine intervention that he was not able to make it,” Zamora said.

He described Pacquiao as “actually in the air circling around, waiting for instructions to land, but unfortunately, he was able to land just before 2 p.m., and the presser had already finished.”

“Offhand,” Zamora said “I think [the press conference] proved to be negative for those who participated. They got a lot of flak on social media and also traditional media.”

Three days after the presser, the flak continued to fly toward Lacson, Domagoso and Gonzales, who alternated in criticizing Vice President Leni Robredo for her supposed efforts to get them to withdraw from the presidential race.

The three men declared that they would not back out and presented themselves as “alternatives” for the public to choose from apart from Robredo, who is No. 2 in the presidential surveys after Ferdinand Marcos Jr.

Domagoso challenged Robredo to make the “supreme sacrifice” and withdraw her own presidential candidacy. Gonzales amplified on the challenge, saying it was better for No. 2 to step aside and let the others run against No. 1.

After the press conference, Lacson clarified that he had not called for Robredo’s withdrawal and that Domagoso had spoken “off-script.”

On Tuesday, Lacson played down the pushback against what had transpired at the presser, and said online trolls were resorting to intimidation.

Also on Tuesday, Gonzales apologized publicly to Robredo, saying that he felt “uncomfortable” with Domagoso’s remarks and that the mayor might have been “carried away by the sentiment.”

But Domagoso again called on the Vice President to drop out of the race, saying he would not apologize for his “fair” opinion despite brickbats from the public and scant support from Lacson et al.

On Saturday night, members of Pacquiao’s staff gave conflicting responses when asked by reporters if the senator would attend the press conference.

It was only on Easter Sunday morning that his media team said he was en route to Manila from General Santos. But in the end, he was a no-show.

In his Tuesday interview, Zamora described the presser’s supposed theme of “unity” as a “very vague notion,” and said it was “illogical” for anyone to back out now.

“We are only 20 days away from the elections and we’ve gone through so [much] time, effort, and expenses. Why withdraw in favor of anybody?” he said.

Zamora said calls for Pacquiao’s own withdrawal had been coursed through him: “There have been offers to me, yes, I have to admit that, but it’s not for me to decide. It’s the decision of my principal… Once he decides, that’s it, and he said only God can make him change his mind.”

He added that his principal was unsupportive of Domagoso’s call for Robredo to withdraw: “Senator Pacquiao believes that the choice is up to the people.”

Asked whether he thought the presser’s “unity” theme had been achieved given the candidates’ discordant positions, Zamora said: “I don’t believe anything was achieved by that press conference. I think it was an afterthought for Mayor Moreno to be calling for the withdrawal of VP Leni. … I think he’s pinning the blame on the reporters who kept asking questions.”

Zamora expressed confidence that Pacquiao could beat Marcos Jr. based on expected votes from Christian groups and other Filipinos who had signed up for his free housing program.

In Estancia, Iloilo, Lacson told reporters that online trolls were trying to intimidate him by claiming that undecided voters had shifted their support to Robredo.

“I’ve seen a lot of that. There are those who try to appeal to conscience and tell me that they used to like me, but have shifted. That’s part of intimidation,” he said. “If they think they can intimidate us, I have gotten used to it.”

But Lacson again distanced himself from Domagoso’s call for Robredo to withdraw, saying he had been “dragged by propaganda” to be part of the mayor’s challenge.

“I never had an idea [that Domagoso will make such a statement], and I didn’t see it coming. I was surprised, too. But we were able to clarify with the media that this was just his personal opinion. But along the way, propaganda pulled us all in,” he said.

Lacson said he would never ask Robredo or any other candidate to withdraw. “This was what they did to me, so ‘what you don’t want done to you, do not do unto others,’” he said.

According to Lacson, he and his running mate, Senate President Vicente Sotto III, will not be distracted by troll activities with barely three weeks left in the campaign.

“We stay focused on what we are doing [despite] a so-called backlash, because there’s none. I asked my campaign team; they said they have not seen or felt anything of that sort,” he said.

As one who personally manages his Twitter account, Lacson said, he could “easily” spot messages from trolls, who, he said without elaborating, were “obviously from the other camp.”

He reiterated that he and his camp were not bothered by the surveys that place him at No. 5.

But his team in the Caraga region had been forced to make multiple schedule changes in the past two days, including a last-minute cancellation of a courtesy call on Surigao del Norte Gov. Francisco Matugas.

Insiders in the mayor’s camp said Matugas had abruptly canceled the scheduled visit on Tuesday because of adverse public reaction to Domagoso’s remarks at the presser. The governor could not be reached for comment.

But Domagoso stood pat on what he had said. “I don’t apologize for something I believe is fair. I don’t say ‘sorry’ for something I did that was within reason,” he told reporters ahead of a town hall meeting in San Francisco. “It was I who said, ‘Be a hero, withdraw, Leni.’ I said that, not Senator Lacson, not Secretary Norberto Gonzales. Let me repeat: Withdraw, Leni. That’s from me alone. Don’t speculate anymore,” he said in Filipino.

He again argued that less hated candidates might have a better chance than Robredo of defeating Marcos Jr.

Asked about the loss of local support due to backlash, Domagoso said: “Of course, you can’t blame them, it’s their environment.”

He repeatedly accused the Vice President’s camp and her “yellow-pink forces” of being bullies who would “cancel” anyone with a different opinion by deploying social media trolls to attack them.

He again cited his impoverished youth in the slums of Tondo, saying it was what gave him the resolve to fight bullies.

“I was made stronger by the situation in my life when young. All my life, many people have bullied me, and even now, these yellow-pinks are still bullies. And I will not let go. You are bullies, and it has to stop,” he said.

Doc Willie disagrees with Isko: Nobody should have been asked to withdraw

‘Taste of their own medicine’: Isko Moreno doubles down on pushing Robredo’s withdrawal