'I heard her shout: Save me, my hand is gone': 9 commended for fending off Singapore slasher | Inquirer News
Close
menu
search

‘I heard her shout: Save me, my hand is gone’: 9 commended for fending off Singapore slasher 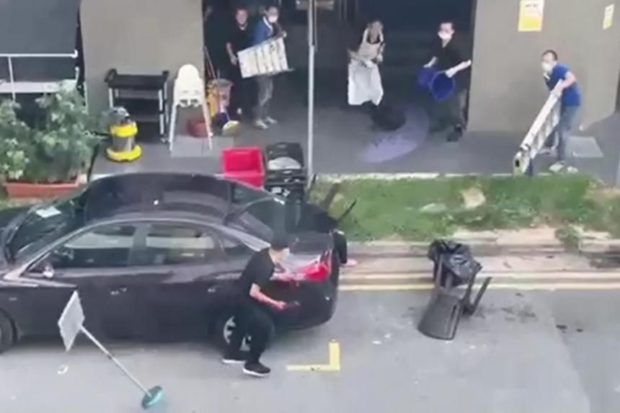 Nine men who flung objects at a man hacking his estranged wife with a chopper in Beach Road were commended by the police. – SCREENGRAB FROM SOCIAL MEDIA via The Straits Times/Asia News Network

SINGAPORE — Nine men who flung objects at a man allegedly hacking his estranged wife with a chopper in Beach Road were on Monday (April 18) commended by the police for helping the bloodied woman fend off her attacker.

“I heard her shout, ‘Save me, save me. My hand is gone!’,” said one of the men, Wei Chen Xiang, 32. He picked up a chair and threw it at the attacker as the victim screamed for her life outside the restaurant he works at last Thursday.

Wei, a kitchen staff at Zhong Hua Steamboat, told The Straits Times on Monday that the victim, Han Hongli, 41, was cradling her injured hand, her face battered. She was a familiar face to him as she worked at Chong Qing (Origin) Steamboat restaurant, just across Zhong Hua.

The attacker ran off when things were thrown at him. Wei and eight other men, comprising kitchen staff at nearby restaurants and contractors working nearby, then banded together to shield Han before the police arrived at the scene at around 5.30pm.

Police officers managed to subdue the attacker with a Taser.

One woman, To Lee Kwee, was also commended on Monday for calling the police. She was among several people who alerted the police to the incident.

Wei said in Mandarin: “I was scared when I saw the injury but there was no time to think, we just could not let the man get close to her again.”

He grabbed some napkins nearby and passed it to Han to tend to her wounds, he recalled.

The nine men and To were presented with the Public Spiritedness Award at the Central Police Division on Monday for their role in preventing the man from causing further harm to Han during the incident.

Cheng Guoyuan, 46, a Chinese national, was charged with the attempted murder of Han last Saturday. It is understood that both of them are still being treated in hospital.

The police and the hospital declined to provide further information on Cheng and Han’s condition due to patient confidentiality.

Commander of the Central Police Division Jeremy Ang, who presented the awards, said the individuals – aged 30 to 58 – acted selflessly to help the woman.

The police said in a statement that Samurai BBQ’s owner, Leonard Shi, 41, and its manager, Jackie Tee, 30, first heard a call for help at a back alley in Liang Seah Street. They attempted to disorientate the slasher by shouting at him and throwing items at him.

Two contractors, Pan Xiao Shuo and Zhang Dai, rushed to their lorry and grabbed a ladder to toss at the man, the police added.

Assistant Commissioner Ang said: “Even though they were fully aware that the man was armed, their extraordinary bravery and quick-thinking in stepping forward deserve our recognition and commendation.

“Their actions, which included shouting and throwing objects at the man to distract and disorientate him, helped to mitigate further harm caused towards the woman.”

Scenes of Thursday’s violent incident and the courageous acts of the award recipients were filmed on video and the clips went viral online.

Lei, 47, a kitchen staff member at Zhong Hua, said he threw bins and pans at the assailant and shouted at him aggressively to scare him off.

Pan, 36, a technician who was servicing an air-conditioning unit nearby, said he and his colleague, Zhang, rushed to their lorry to grab heavy items to throw at the assailant.

Pan, who is from China, said in Mandarin: “I was looking for things around me to throw at the man, and then I remembered we had a ladder in our lorry.

When he called his wife and children, aged 13 and 11, back home in China about the incident, they said they were proud that he helped the woman.

He said: “I’ve never seen anything like it. I was scared but it had to be done.”

Indonesian maid in Singapore gets 9 months jail for elbowing baby’s face, stepping on his knee