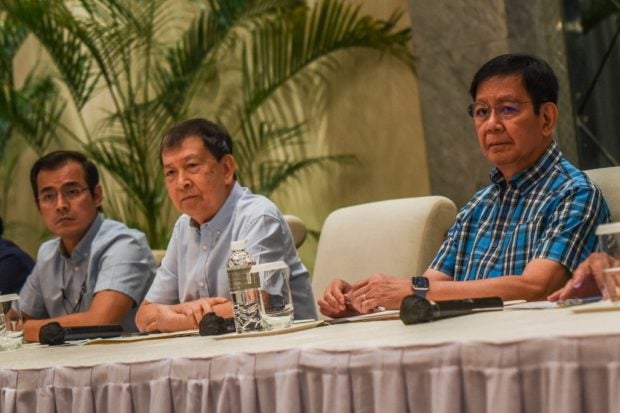 MANILA, Philippines — The respective camps of presidential bets Manila Mayor Isko Moreno Domagoso and Senator Panfilo Lacson on Monday were quick to point to the questions posed by media for the supposed anti-Robredo tenor of their Easter Sunday press conference.

Moreno and Lacson, along with former National Security Adviser Norberto Gonzales, earlier held a press briefing to announce that they will not back out of the presidential race despite alleged calls from the camp of Vice President Leni Robredo.

In the same breath, the three candidates turned the table and asked for the withdrawal of Robredo, currently ranking number 2 in presidential surveys, albeit a far second to frontrunner, former Senator Ferdinand “Bongbong” Marcos Jr.

“That’s why it went to that conversation na naging (that seemed) anti-Leni Robredo na tuloy. This was the media who put those questions in and eventually of course, ‘yung mga sentiments ng candidates came out about her,” said Ramel.

“It was that way because the questions by the media, they kept on pounding on the issue on Vice President Leni Robredo, that’s why the gentlemen obliged them by answering what they really felt,” he added.

Ramel likewise stressed that some media are framing the presidential elections as a two-way race between former Senator Ferdinand “Bongbong” Marcos Jr. and Robredo.

“Ang ginagawa kasi ngayon (What they are doing), I’m sorry, some of the media people are framing it as a two-way race. Napaka- (very) unfair,” he said.

Based on the latest Pulse Asia survey, Marcos leads the presidential preference, followed by Robredo.