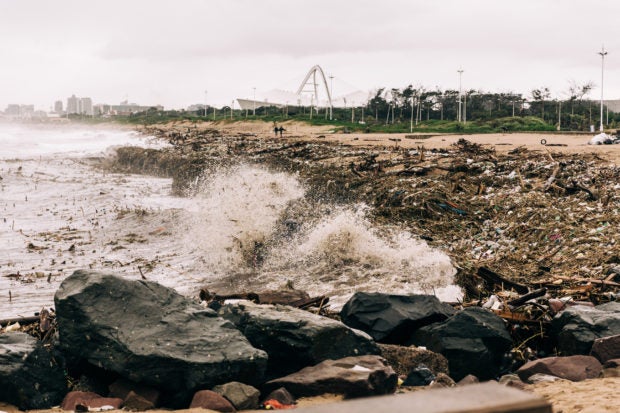 Water from the Indian ocean batters the Blue Lagoon beach as weather patterns worsen following heavy rains earlier in the week in Durban, on April 16, 2022. AFP

DURBAN—South Africa’s flood-ravaged east was hit by more rain Saturday after the deadliest storm to strike the country in living memory killed nearly 400 people and left tens of thousands homeless.

Floodwaters engulfed parts of the southeastern coastal city of Durban this week ripping apart roads, destroying hospitals and sweeping away homes and those trapped inside.

Emergency services in the southeastern KwaZulu-Natal (KZN) province, where Durban is located off the Indian Ocean coast, were on high alert.

Recovery operations and humanitarian relief were underway in the city of 3.5 million which would normally have been teeming with Easter holidaymakers this weekend.

The death toll rose Saturday to 398 while 27 people were reported still missing, the government said in a statement. More than 40,000 have been rendered homeless.

“Sadly there are still bodies being recovered from homesteads, especially from the rural areas,” Shawn Herbst of the first responder company Netcare 911 told AFP.

“There is still damage taking place, especially with the rain we are experiencing today.”

This weekend’s rainfall will not be “as hectic as it was in the past few days”, according to Puseletso Mofokeng, South Africa Weather Service forecaster.

With soil being over-saturated with water, more flooding is expected.

Despite the light rains falling on the city, a local premiership league football match between AmaZulu and Maritzburg United went ahead at the 2010 World Cup Moses Mabhida Stadium Saturday.

But a Currie Cup rugby match between local team, the Sharks, and the Bulls from Pretoria, scheduled for the city was cancelled Friday as a mark of respect for victims of the flooding.

Troops, police and volunteers are leading the search and rescue operation.

Residents of Marianhill, desperate for news of their missing relatives were relieved at the sight of rescuers, but the dread of fresh rains lingered.

“We have the rescue team finally… reach here, but seeing the rain that is coming back, they are going to be disrupted,” said Dumisani Kanyile after recovery teams failed to find any of the 10 members of one family missing in the Durban district.

Mesuli Shandu, 20, a close relative of the family, was still in a state of disbelief “that a massive number of people died in one day, including babies”.

“When I came, I thought it was a dream, maybe someone would pinch me and say it was a dream, just wake up.” But “I see all the rescuers and the dogs searching for their bodies”.

“We have moved from the emergency phase to the recovery phase of the disaster, more to humanitarian relief effort and restoration of services,” he told AFP.

The floods have damaged more than 13,500 houses and completely destroyed around 4,000, leaving 58 hospitals and clinics “severely affected”, said government.

The government has announced one billion rand ($68 million) in emergency relief funding.

“Our people are suffering,” said Motsepe at a hall sheltering displaced people.

President Cyril Ramaphosa has postponed a working visit to Saudi Arabia that was scheduled to begin Tuesday, his office said.

“The loss of nearly 400 lives and thousands of homes, as well as the economic impact and the destruction of infrastructure, calls for all hands on deck,” said Ramaphosa.

South Africa, the continent’s most industrialised country, is still struggling to recover from the two-year-old Covid pandemic and deadly riots last year that killed more than 350 people, mostly in the now flood-struck southeastern region.