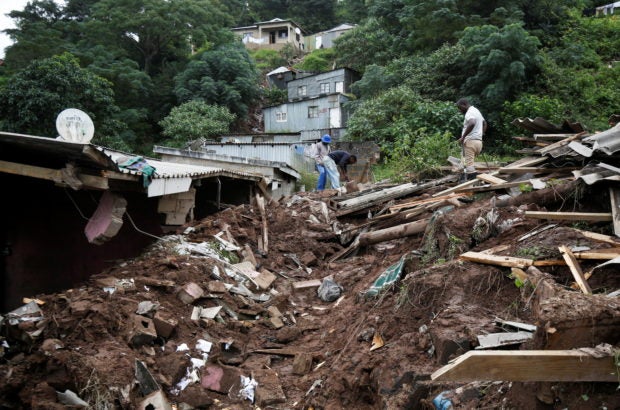 Men sift through the rubble of a church which collapsed onto a house killing four children in Clermont, Durban, South Africa, April 13, 2022. REUTERS/Rogan Ward

DURBAN — South Africans were searching for survivors on Friday of floods that killed almost 400 people, according to the latest tally, washing away homes and roads and leaving thousands without shelter, water and power.

The floods in Kwazulu-Natal Province have knocked out power lines, shut down water services and disrupted operations at one of Africa’s busiest ports. The death toll rose to 395 on Friday from an earlier estimate of 341.

Finance Minister Enoch Godongwana told TV station Newsroom Afrika that an initial 1 billion rand ($68.3 million) for emergency relief was available for immediate use, after the province was declared a disaster area.

Local authorities have estimated the damage at several billion rand and reported sporadic looting – in a city still recovering from a catastrophic outbreak of rioting and looting last July. Many of the worst-affected are in poor, unplanned, informal settlements vulnerable to flooding.

Authorities said about 13,600 people had been made homeless by the floods.

“I feel empty, lost and alone. I think I’m losing my mind,” said Winnie Hlakanyana, 51, after her five-room shack in Kwazulu-Natal’s Gandhi settlement was totally destroyed, leaving her and six of her children homeless.

“I wish I’d just died because I cannot handle starting from scratch. Seeing all my hard-earned furniture washed away and my home covered in mud. I can never get (it) out of my mind.”

Local TV stations showed volunteers clearing plastic containers, piles of bamboo and driftwood from Durban beachfront. On other beaches, a Reuters witness said holidaymakers were taking advantage of a lull before the rains were due to resume later on Friday.

More than 40,000 people have been affected by the disaster, authorities say.

Scientists believe the southeastern coast of Africa is becoming more vulnerable to violent storms and floods as human emissions of heat-trapping gases cause the Indian Ocean to warm. They expect the trend to worsen dramatically in coming decades.

At a silent procession in Durban to mark the start of the Easter weekend, Christian worshippers laid flowers on a cross.

“There are so many reasons to lose hope at this time,” Raymond Perry, a director of Christian charity The Dennis Hurley Center. “(But) … even in the face of despair there is hope.”