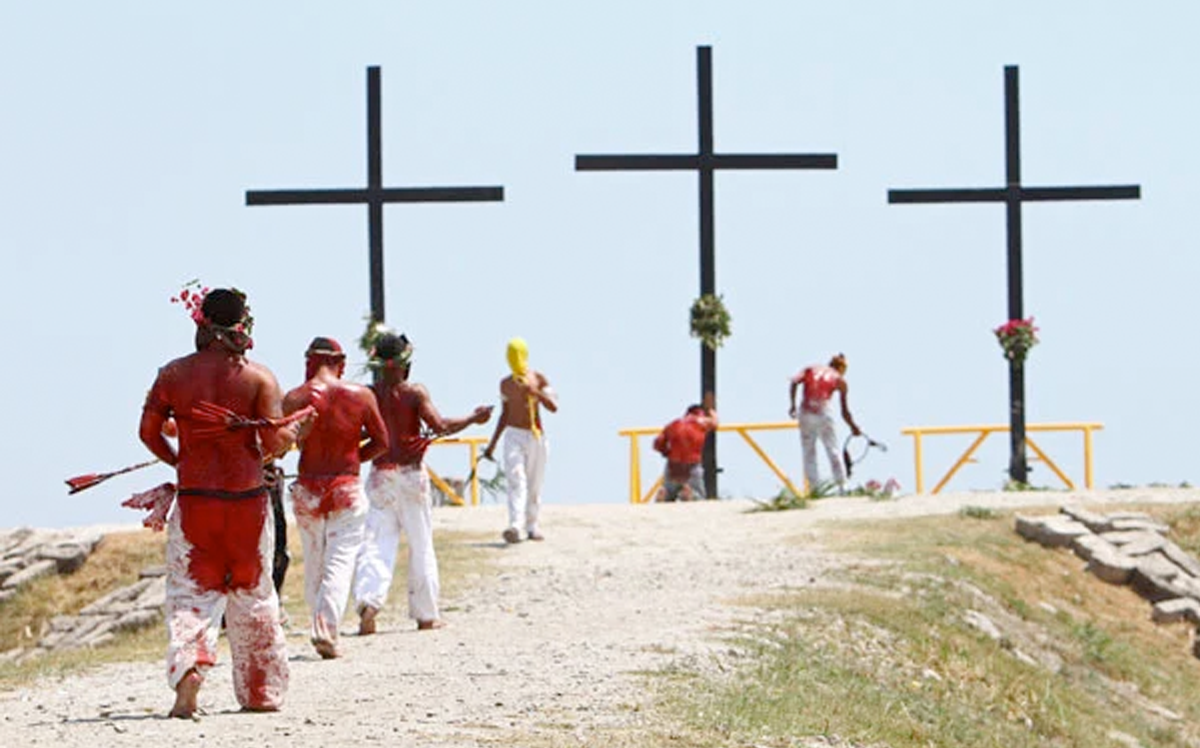 MANILA, Philippines—During Good Friday, devout Christians, Catholics, and even other faiths have their own ways of commemorating the crucifixion of Jesus Christ.

Across the globe, Good Friday is traditionally observed as a day of sorrow, penance, and fasting.

READ: Penance at Lent: What can people give up?

In some countries, specific traditions and practices are held annually during Good Friday as a way to commemorate the sacrifice made by Jesus Christ.

Here are several Good Friday traditions in countries across the globe.

In the Philippines, one of the well-known traditions during Holy Week is Senakulo—a stage or street play depicting the Passion of the Christ. The play highlights the “violence and brutality” of Christ’s persecutors.

Prior to the pandemic, the play often takes place in the provinces of Bulacan, Rizal, and Pampanga.

The “bloody reenactment” of Christ’s Passion or crucifixion is usually held in San Pedro Cutud in San Fernando, Pampanga. The painful Lenten tradition, however, is discouraged and not sanctioned by the Catholic Church.

Due to the COVID-19 pandemic, the real-life crucifixion as well as other traditions, like whipping of the backs or self-flagellation, rolling on hot concrete pavement or sand, and re-enactment of Via Crucis, or the Way of the Cross, across the country have been prohibited in the past two years.

This year was supposed to be the 36th year of re-enacting the crucifixion for Ruben Enaje, the longest practitioner of real-life crucifixion in the country. However, the rites will not push through once again as a measure to prevent the spread of COVID-19.

“Although I would like to resume the sacrifice, I cannot because there is an order banning crucifixion and flagellation,” Enaje told the Inquirer on Wednesday, referring to Mayor Edwin Santiago’s Executive Order No. 20, which took effect on April 10 and will run until April 17.

Another Lenten tradition observed by Catholics in the country is The Station of the Cross, which is held specifically on Good Friday. Devout Catholics go on a pilgrimage to mimic the passion of Christ as a sign of sacrifice.

Filipino Catholics also observe the annual Siete Palabras, or the traditional retelling of the Seven Last Words of Jesus Christ, on Good Friday. It has become a key Lenten broadcast on Philippine TV.

Similar to the Philippines’ Senakulo is the annual full-scale play in Trafalgar Square in Westminster, London. The re-enactment commemorates the day Jesus is believed to have been arrested, tried, and crucified by the Romans.

Over 100 actors and volunteers dressed in costumes come together every Good Friday to bring the story to life.

The 90-minute performance, which has been running for over 10 years, “ has become a permanent fixture of London’s Easter weekend and attracts thousands of spectators, embracing those of all faiths and none,” according to the official website of the Mayor of London.

In Mexico, one of the oldest and most elaborate passion play is known as the Passion Play of Iztapalapa. It is an annual event held during Holy Week, specifically on Good Friday.

With flogging and the use of fake blood, the Passion Play of Iztapalapa is considered one of the most realistic and brutal re-enactments of the crucifixion of Christ.

People in Bermuda observe Good Friday in a different way compared to other countries. Most people, especially kids, in the country fly colorful kites every Good Friday, which was believed to be a representation of how Jesus ascended to heaven.

“Kites are a major part of Bermuda culture, enjoyed by residents and visitors alike,” said the Bermuda Tourism Authority (BTA).

“On Good Friday, enthusiasts head to various parts of the island to show off, test, and view homemade kites that soar to the skies with a signature ‘hum’,” it added.

On Good Friday, various towns and villages in Malta commemorate the Passion of the Christ with a solemn procession of statues.

“Each of these statues represents a particular episode in the Passion of the Christ and is carried by bearers. Between one statue and another (some 10 in all) participants are dressed as biblical characters who take part in the procession in a dignified manner,” said the Malta Tourism Authority.

The procession is also usually attended by people dressed as Roman soldiers, Jewish priests, and important Biblical figures while the biblical storyline of the life, suffering, and death of Jesus Christ is being narrated.

The annual Via Crucis or Way of the Cross ceremony is also popular in Vatican City on Good Friday. The event is led by the Pope and consists of the 14 Stations of the Cross, stages between the condemnation of Jesus to death and his burial.

Each year, the Pope assigns the meditations and prayers accompanying the Stations of the Cross to a group, association, or individuals—so that those who carry the cross from one station to the next reflect world events.

According to an article by the Vatican News, 15 families linked to Catholic volunteer associations and communities wrote the meditations, “offering their perspectives on the pain life can bring and the horrors of war.”

This year, the Vatican also decided to have a Russian woman and a Ukrainian woman carry the cross together during a Good Friday procession, which will be presided over by Pope Francis.

This decision was, however, met with criticisms amid the ongoing campaign of Vladimir Putin to destroy Ukraine, a former Soviet republic, which has so far led to 1,793 civilian deaths, according to the Office of the United Nations High Commissioner for Human Rights (OHCHR).