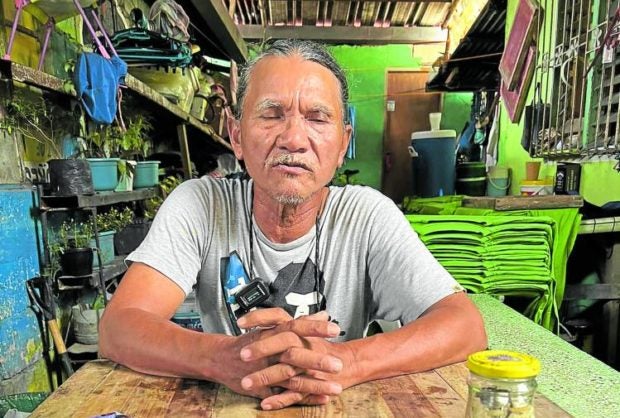 CITY OF SAN FERNANDO, Pampanga, Philippines — Ruben Enaje’s real-life crucifixion, supposed to be his 36th year since 1986, will not push through for the third year due to an order prohibiting crowd-drawing Lenten rites in this Pampanga capital as a measure to prevent the spread of COVID-19.

Enaje is the only Filipino who is known to be the longest practitioner of the painful Lenten tradition, which is not sanctioned by the Catholic Church.

To continue his thanksgiving for good health, this 61-year-old billboard painter sponsored a “pabasa” (chanting of the Passion of Christ) in his village of San Pedro Cutud.

“Although I would like to resume the sacrifice, I cannot because there is an order banning crucifixion and flagellation,” Enaje told the Inquirer on Wednesday, referring to Mayor Edwin Santiago’s Executive Order No. 20, which took effect on April 10 and will run until April 17.

Admitting he was dismayed by the order, he said many of his village mates were complaining because it disallowed traditions.

Flagellation during Good Friday sees thousands of men, including boys, wound their backs with glass shards or blade, shrouding their faces, joining a long line of flagellants (“mandarame” and “magsalibatbat”) and marching toward a local version of Mt. Calvary while whipping their backs with “burilyos” (a set of 25 bamboo sticks) in a single cadence.

Enaje, playing the part of Jesus Christ in a street play rendition of the “Via Crucis” (Way of the Cross), ends the role-playing and carries a 37-kilogram wooden cross to Purok Kuatro, where he would be crucified.

For 10 minutes or so, Enaje would quietly pray for the country and Filipinos, asking God to bless the Philippines and ease poverty.

Since 2020, when the COVID-19 pandemic struck, he has been praying that the health crisis would end or ease.

Enaje took to the cross in 1986 as a way of thanking God for surviving a fall from a three-story building in Tarlac without any scratches or internal bleeding in 1985.

After completing 27 years, Enaje extended the sacrifice and felt like it was a welcome burden that he should bear for the “sake of the community.”

Crucifixion in Cutud has been attributed to itinerant faith healer Artemio Anoza in 1962.

The Via Crucis, said to have been staged on the streets of Cutud in 1955, was written and directed by Ricardo Navarro.

The events would draw a large crowd of as many as 50,000 spectators, including foreigners before the pandemic.

For 3rd year, no Lenten rites in Pampanga capital