For 3rd year, no Lenten rites in Pampanga capital 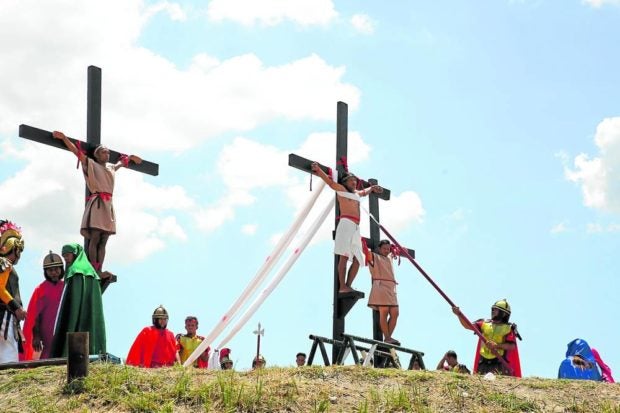 PAINFUL REENACTMENT | Ruben Enaje (center) plays the role of Jesus Christ as he is nailed to the cross in Barangay San Pedro Cutud in the City of San Fernando in this photo taken on Good Friday in 2016. The village council has again banned Lenten rites to avoid mass gatherings amid the pandemic. (Photo by TONETTE OREJAS / Inquirer Central Luzon_

CITY OF SAN FERNANDO, Pampanga, Philippines — The village council of San Pedro Cutud, the site of the popular Via Crucis (Way of the Cross) in this capital city of Pampanga province, will enforce the ban on crucifixion, self-flagellation, and any act imitating the passion of Jesus Christ during the Holy Week.

It would be the third time that thousands of penitents and devotees were barred from gathering here to express their faith in Lenten practices discouraged by the Catholic Church as COVID-19 and its variants remained a threat.

The whipping of the backs (self-flagellation or “pamandarame”), rolling on hot concrete pavement or sand (“magsalibatbat”), reenacting the Via Crucis, and real-life crucifixion (“papapaku”) have been prohibited again by Mayor Edwin Santiago.In an executive order issued on March 28, Santiago disallowed the rites from April 10 to April 17, this year’s Holy Week (Maleldo).

It is usually Barangay San Pedro Cutud that draws large crowds of spectators. The rites lead to a replica of Mt. Calvary, a hill made out of Mt. Pinatubo’s sand.

Mat Ryan dela Cruz, village chief of San Pedro Cutud, said only the “pabasa,” or the continuous public chanting of the “Pasyong Mahal” to narrate the Biblical account of Christ’s suffering, would be allowed in a makeshift structure near the St. Peter Chapel in the village.

“We will implement the mayor’s order. There will be no Via Crucis again this year in San Pedro Cutud and we urge everyone to cooperate and refrain from self-flagellation and carrying of crosses, especially among the youth,” Dela Cruz told the Inquirer in a telephone interview on Tuesday.

He said beginning Holy Monday (April 11), members of the village council and barangay tanod (village peacekeepers) would patrol the streets of San Pedro Cutud to enforce the city government’s order.

“We will ask everyone not to violate the executive order. Otherwise, they will be arrested by the police and eventually have to pay P5,000 in bail,” Dela Cruz said.

The three 12- to 15-foot-high (3.6- to 4.5-meter-high) old wooden crosses, he said, would once again be erected at the makeshift Golgotha in what used to be a rice field in the village so devotees could go there and pray.

“But nobody will be crucified there this Good Friday,” Dela Cruz added.

Instead, devotees, parishioners and the general public are encouraged to observe Holy Week by attending Masses and other religious services and activities.

Santiago said barangay councils were tasked with implementing, monitoring and ensuring compliance with this executive order.

Pampanga is known for its various traditional Lenten activities, particularly self-flagellation and carrying of heavy crosses. 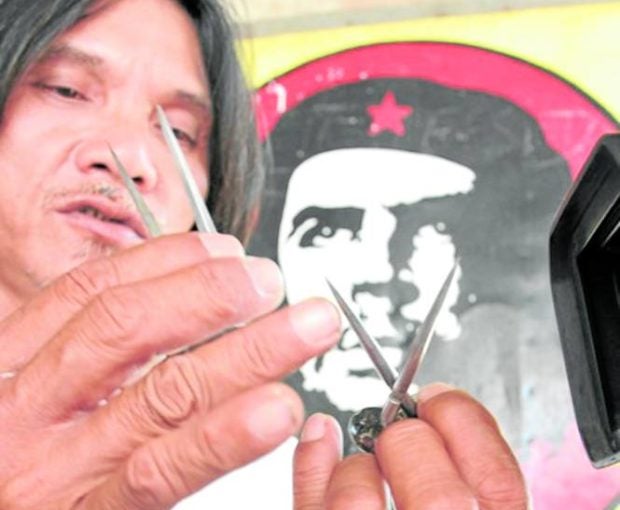 PAMPANGA ‘KRISTO’ These steel nails have not been pierced through the palms of billboard maker Ruben Enaje as the Via Crucis (Way of the Cross), where he has been playing Jesus Christ, will not be staged this year. —TONETTE OREJAS

But San Fernando usually stands out and has become a popular Holy Week destination for local and foreign tourists since the early 1990s because of the Via Crucis, a Good Friday street play that culminates with voluntary crucifixion, the ultimate act of Lenten penitence.

The crucifixion was started in San Pedro Cutud village in 1962 by faith healer Artemio Añoza.

From 1986 to 2001, smoked fish processor and vendor Chito Sangalang played the role of Kristo (Christ) in what many people consider a horrid ritual at the makeshift Golgotha in the middle of a rice field in San Pedro Cutud village.

Sangalang and the several other penitents had both of their hands and feet punctured with sterilized 3-inch long steel nails while tied to wooden crosses.

In 2002, signage painter Ruben Enaje took Sangalang’s place as the lead character in the Via Crucis. Like Sangalang, Enaje let himself be nailed to the cross in 1986.

Dela Cruz told the Inquirer that Enaje was just waiting for the end of the pandemic-related prohibition on voluntary crucifixion.“He told me he would continue to have himself nailed to the cross so long as his body could endure it,” he said.

Despite persistent discouragement from the Archdiocese of San Fernando, the annual ritual persisted and continued, attracting thousands of local and foreign spectators. It has been included in the calendar of events of the city government and the Central Luzon office of the Department of Tourism.

—WITH A REPORT FROM TONETTE OREJAS

Lent in the time of COVID-19: 7 ‘Kristos,’ 3 flagellants nabbed in Pampanga